The Eternal Duel: A History of Commas 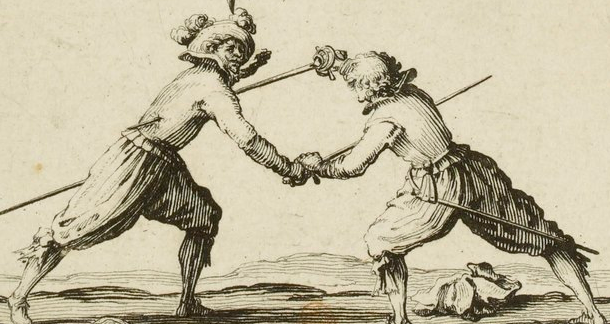 Commas are a touchy subject, having divided writers of the English language into two distinct camps for many years.

On one side of the battlefield are those in favor the Oxford or “serial” comma, which is endorsed by Oxford University Press and the Chicago Manual of Style. In the other corner of the ring are the Associated Press and New York Times, ever skeptical of any unnecessary punctuation.

NPR’s Linda Holmes has a succinct way of describing the root cause of the comma wars:

For those of you who enjoy the outdoors and would no more sort commas into classes than you would organize peanut butter jars in order of viscosity, the serial comma — or "Oxford comma" — is the final comma that comes in a sentence like this: ‘I met a realtor, a DJ, a surfer, and a pharmaceutical salesperson.’ (In this sentence, I am on The Bachelorette.)

Just to reiterate the obvious, some believe the final comma should be included, while others argue that it must be left out.

Incidentally, Holmes makes a decent point— when did anyone start taking commas so seriously? Although it sheds little light on the sheer amount of animosity tied up in this debate, here’s a brief timeline of the comma’s history so far:

As man learned to speak, commas were in the predevelopment phase. Commas are a natural resting point in a sentence, and they evolved out of a need for orators to pause and draw breath. They first began appearing as marks on a page in ancient Rome and Greece, with a single “beat”  representing a short stop in a lengthy speech.

According to the University of Wisconsin’s ‘Comma Project,’ Saint Augustine couldn’t bear to hear Scripture read aloud incorrectly, which lead him to lobby the church for set scripture regulations.

The King’s English was published, setting firmer rules for the use of commas. During much of the nineteenth century, commas were used everywhere, all willy-nilly — it was indecent.

Outside the Lowell Athenaeum, to this day there hangs a sign that reads: “On this site on August 15, 1968, authors Jack Kerouac and William S. Burroughs came to blows over a disagreement regarding the Oxford comma.”

There’s some debate as to whether the fight really occurred, but it still makes a fantastic story.

Indie pop group Vampire Weekend released their single, “Oxford Comma.” In a Vanity Fair interview, the song’s writers state that it’s “more about not giving a fuck than about Oxford commas.”

The Oxford PR department renounced the Oxford comma. Although the Oxford University Press still stands staunchly behind its beloved punctuation mark, this was a blow beneath the belt for Oxford comma purists everywhere.

The Oxford Comma has its own facebook page with over thirty-two thousand likes and counting, as of the writing of this article. Apparently, the comma debate is still going strong, as the most recent comment on its timeline is: “I HATE YOU ALL!”

So much trouble, over such a little thing.

I err on the side of clarity, and thus, always Oxford.

Also, I do a lot of voiceover work, where comma means pause, and hate having to go back and redo lines because the writer left out that last serial comma and screwed up my rhythm or emphases. "Oh, so you didn't mean to group those two items together. Thanks for wasting another ten seconds of my life trying to figure out your intention."

Joshua Chaplinsky from New York is reading a lot more during the quarantine March 14, 2014 - 10:20am

All hail the Oxford comma!!!

This is so dumb. Go vacuum or mow the lawn or something...

Who has time to vacuum their lawn?

I'm with Gordon. It's not like we are typsetting every letter anymore. Take the side of clarity--the side of the Oxford comma.

Dwayne from Cincinnati, Ohio (suburbs) is reading books that rotate to often to keep this updated March 26, 2014 - 9:50am

I'm amazed at writers who don't use the Oxford comma.  Amazed in a bad way.