The Devil That You Know: Literature's Evil Archetype 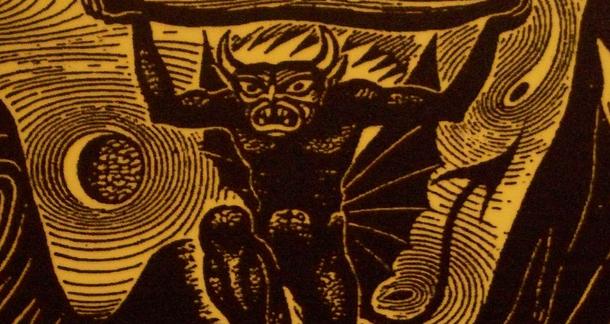 Can you guess his name? Satan, Lucifer, Beelzlebub, The Boogey Man, Old Nick, Krampus, King of Hell. The Devil has more working aliases than J.K. Rowling. In turns revolting, terrifying, charismatic, tragic, and a bit of a drama queen, the Devil is a difficult character to pin down. From Goethe's Faust to Bulgakov's 20th century satiric masterpiece, he is without a doubt one of the most versatile and enduring literary archetypes of all time.

Where I live, on the coast of New England, there's an old local folk tale about a man named Jonathan Moulton who made a deal with the Devil. In exchange for his immortal soul, the Devil would come on the first day of every month and fill Moulton's boots to their tops with gold coins. Eventually, Moulton decided being rich wasn't enough—he wanted to be insanely rich—and cut holes in the boots' soles so the gold would fall to the floor and never completely fill the boots. As you can probably predict, things didn't end well for Moulton. Like a spoiled child, Satan threw a massive temper tantrum and burned his house and possessions to the ground.

From Goethe's Faust to Bulgakov's 20th century satiric masterpiece, [the Devil] is without a doubt one of the most versatile and enduring literary archetypes of all time.

Goethe's original Faust, the tragedy of a brilliant man who signed away his soul for worldly pleasures and thus threw his life into ruin, was a story that spawned a million others, including that of New England's own Moulton. Even as late as the twentieth century, the legend of blues guitarist Robert Johnson demonstrated the tenacity of the Faustian myth. Its consistency is indicative of mankind's split relationship with evil. Is evil (and the Devil, for that matter) an outside force that descends suddenly from the sky like a bolt of lightening to burn your house down, or does it come purely from within? The answer may seem clear-cut to a modern reader, quick to blame the idiot who offered his soul up in the first place, but the alternative bears some contemplation. Famine, poverty, disease, even natural death: can any individual truly claim control over their life circumstances? Inevitably, the Devil's true nature circles back to the concept of free will.

In Islam, Shaytan was granted by Allah very limited power over the world of men, the ability to whisper evil ideas into their ears and hearts. To some, the Devil is a physical, exterior force, like a hurricane or a tornado. He might curse an individual with bad luck, or send a messenger to cause harm in the form of a black cat, or a witch. But the Islamic theology suggests that the Devil is merely provoking a force that is already in place within mankind himself.

How else could it have occurred to man to divide the cosmos, on the analogy of day and night, summer and winter, into a bright day-world and a dark night-world peopled with fabulous monsters, unless he had the prototype of such a division in himself, in the polarity between the conscious and the invisible and unknowable unconscious? (Carl Jung, CW 9i, para. 187)

As such, the Devil's character has often served as a kind of talking point; a convenient and accessible symbol for the worst of human flaws. It's no surprise then that the Prince of Darkness has made an appearance in many critiques of society and government, from political cartoons to Bulgakov's aforementioned critique of Stalinism, Master and Margarita. Carlos Ruiz Zafon's Shadow of the Wind, set in post Civil War Barcelona, also follows a mysterious man claiming to be the Devil, a character who seems almost benign when contrasted with the fascists in control of the city.

But there is more to the story of Lucifer than just his role as a symbolic means of exploiting societal ills. Explored in surprising depth by Milton in Paradise Lost, the fallen rebel angel is a fascinating character on his own. Having just been stripped of all power and beauty, then cast into Hell, Milton's Lucifer soldiers on quite optimistically. In fact, his character is so magnetic, literary critic William Empson once made the (albeit rather unpopular) argument that Milton was accidentally soliciting sympathy for the Devil by casting God as a foil:

[Milton] is struggling to make his God appear less wicked...and does succeed in making him noticeably less wicked than the traditional Christian one; though, after all, owing to his loyalty to the sacred text and the penetration with which he make its story real to us, his modern critics still feel, in a puzzled way, that there is something badly wrong about it all. That this searching goes on in Paradise Lost, I submit, is the chief source of its fascination and poignancy... (Milton's God (1965), p. 11)

Unfortunately—or fortunately, depending on your opinion—Empson's once contentious book, Milton's God, is no longer in print. But there are plenty of other titles to explore this Halloween season if you're in a Devilish frame of mine, and not all of them are as serious Paradise Lost or Faust. Both Chuck Palahniuk's Damned and the Neil Gaiman/Terry Pratchett collaboration, Good Omens, offer a more blackly humorous perspective on the King of Hell and his disciples. And remember the good advice of Martin Luther this October: "Whenever the devil harasses you, seek the company of men or drink more, or joke and talk nonsense, or do some other merry thing...We are conquered if we try too conscientiously not to sin at all. So when the devil says to you: do not drink, answer him: I will drink, and right freely, just because you tell me not to.”

I will Martin Luther, I will.