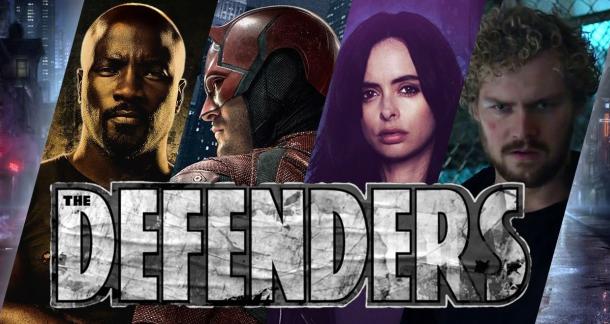 The Defenders, Marvel’s epic crossover between its (mostly) beloved Netflix series, finally landed on the internet to a mixed response. While many fans greatly enjoyed watching their favorite heroes interact with each other (much like they did in The Avengers five years ago), others found their fun tempered by serious flaws in the storytelling. The show gets off to a promising start, but by the end it has squandered its potential by making all of the same mistakes as its predecessors, all while adding a slew of new ones. Although not nearly as disastrous as Iron Fist, and infinitely easier to watch, The Defenders is one of the weaker entries in Marvel’s Netflix catalogue due to its uneven narrative and often sloppy writing.

A Plot Full of Holes

The first time Danny Rand and Luke Cage meet, they of course fight each other in the grand tradition of superhero crossovers. In that scene it is established that Danny is completely unable to harm or even move Luke until he uses the awesome power of the Iron Fist. Later on when they encounter White Hat, one of the Hand’s leaders, the villain is able to hurt the unbreakable man using a special technique that targets pressure points or possibly nerves. But after White Hat is decapitated, suddenly every faceless ninja and black-tied thug is able to punch and kick Cage around like a normal person. That is only the smallest oversight in the script. It gets so much worse.

The Defenders suffers from the same problems that currently beset Marvel’s comics. Their recent abundance of massive, ongoing crossovers that stretch out a thin layer of story across dozens of titles have given fans “event fatigue.”

The clan of evil ninjas known as the Hand return to play the big bad for this series. Despite being the main antagonist, the Hand remains as mysterious and vague as when they first appeared in the shadows of Daredevil. We learn very little about them that we did not know already—they are deadly, invisible, and undying. The source of their immortality is revealed to be a rare and precious resource referred to only as “the substance.” It stretches believability that this ancient order has never given their most holy sacrament a more prestigious or at least symbolic name, especially since they insist on calling Elektra the “Black Sky” without ever explaining what that means or why it's important.

But it doesn’t stop there; the longer you look at the Hand, the less their nefarious scheme makes sense. And it's not because it's so brilliantly complicated—the parts simply don’t add up. The Hand’s leadership asserts that New York must fall to achieve their goal, which you could be forgiven for thinking was somehow tied to the mysterious earthquakes at the beginning of the season. But when Elektra finally gains access to the cave full of dragon fossils that the ninjas covet, nothing happens. New York does not fall. The wanton destruction is actually perpetrated by the heroes, who decide that blowing up the building is the only to stop the Hand. When the smoke clears, we still know nothing about what the Hand’s mission to “serve life itself” meant beyond cheating death with some mystic drug. Although they have been a looming presence across four seasons of television, we still know nothing about them when they are finally defeated, which leaves the heroes’ victory ringing hollow.

Even if you buy the Hand’s prophecy of doom, there is very little evidence of it beyond the first few episodes. Other than the kid Luke Cage was trying to help in the beginning, the city of New York and its citizens are never shown to be in peril. Our heroes punch through a few waves of ninjas or other stuntmen when they aren’t quipping or fighting amongst themselves, but only Elektra and Madame Gao ever seem capable of challenging the Defenders at fisticuffs. Some of the other “fingers” of the Hand, like Murakami, are introduced with monologues about their badassery and then fail to ever threaten the protagonists before being summarily terminated. The tension is also absent from a showdown between Colleen Wing and Bakuto, her former sensei and a foe she had already killed once before.

Once shit starts to get real, all of the heroes’ family and friends are secured in a police station and they are not threatened again until they decide to leave on their own. Since the enemy’s goal is never clearly defined, you’re never sure if the heroes are actually making any impact beyond the faces they punch. Most of the action doesn’t provide any meaningful context since it never feels like our heroes or the city they protect are in any real danger. Are they edging closer to victory or narrowly avoiding defeat? Who knows! Before the big final battle scene, Daredevil informs Jessica and Luke that there are at least thirty armed guards waiting for them, and while they react as if that is a large number, the three of them dispatch the henchmen in under a minute. Then Gao appears to taunt them and the goons they defeated get up and fight them again, the only difference being that the soundtrack changes to Wu-Tang Clan. It’s hard to get excited about our heroes fighting people they just knocked out three minutes ago. But stakes weren’t all that was missing from The Defenders.

A Lack of Character

Time has passed since we last saw our heroes, but only Jessica and Matt seem to be at all affected by it. The former has gone into a depressive spiral after her harrowing confrontation with Kilgrave, and the latter is trying to move on from his vigilante days and just be a normal lawyer. The others haven’t changed since the credits rolled on their own series: a prison stint has done nothing to dampen Luke’s righteous confidence or hamper his ability to wander the streets of Harlem beating up bad guys, while Danny is still a whiny, petulant child who won’t listen to anyone more reasonable than himself, which is nearly everyone. White Hat calls him the dumbest Iron Fist ever, and it’s hard to argue with him. Once Danny discovers that he is actually the key the Hand seeks, instead of keeping it hidden from them he decides to charge headlong into battle. The rest of the team points out what a bad idea that is, so Danny fights with them and ends up tied to a chair, effectively downgraded from character to a MacGuffin. When Elektra finally captures him, she doesn’t even have to trick him into doing what she wants. She ridicules him and that makes Danny so angry that he uses the Iron Fist, even though he is fully aware that is exactly what the villain needs him to do. Even in captivity, he still could have delayed the evil scheme by simply not using his superpower, but I guess Danny figured it would all be worth it for the chance to punch Elektra really hard.

But the lack of depth or change is not confined solely to the principal cast. Although we finally meet the leadership of the Hand, their meetings remain frustratingly vague and reveal little of significance. Sigourney Weaver’s much lauded performance as Alexandra actually conceals a paper-thin sketch of a character that would be utterly forgettable in the hands of a less-capable actress. While Alexandra comes off as powerful, stately and wise, it is Weaver’s craft that imbues the character with these things more than anything in the script. Most of her villainous monologues are fairly boilerplate, and it is only when she’s scolding subordinates that we get a peek of the real woman behind the fearless leader’s mask. Even though she is the lead antagonist, neither we nor the heroes learn any more than a few basic biographical details about her before she is stabbed in the back right on time for Netflix Marvel’s patented third act villain swap. Elektra has nothing even close to Alexandra’s sense of gravitas, but she is already a more compelling villain because we actually know things about her—who she is, where she came from, what she wants. This also made her heel turn more dramatic since there was actually a baseline for comparison—you could see how she changed and in what ways she stayed the same. Even though I really enjoyed Weaver’s portrayal of Alexandra, her sudden death failed to move me—I was incapable of caring about the fate of a villain I had met only hours ago and learned almost nothing about beyond her penchant for white capes and classical music.

In some ways, The Defenders suffers from the same problems that currently beset Marvel’s comics. Their recent abundance of massive, ongoing crossovers that stretch out a thin layer of story across dozens of titles have given fans “event fatigue.” There is always so much going on that it is impossible for fans to keep on top of it all, and it is rarely worth it to try. Both Civil War II and Secret Empire were two exhaustively long events back to back in which very little actually happened and the status quo barely changed. Even if it did, hardly six months would go by before the next universe-shattering event shook it all up again. That’s not to say that big crossover events are always bad and shouldn’t happen—when done right, it’s an epic, unforgettable adventure. But when it’s forced, and four issues of story is stretched across dozens of titles, you’re left with something that is much less than the sum of its parts. Even though The Defenders was supposed to be this perfect synthesis of four (well, three) successful shows, the end result was a few charming conversations punctuated by choppy fight scenes. It’s certainly not a terrible show, but it had the potential to be so much more.