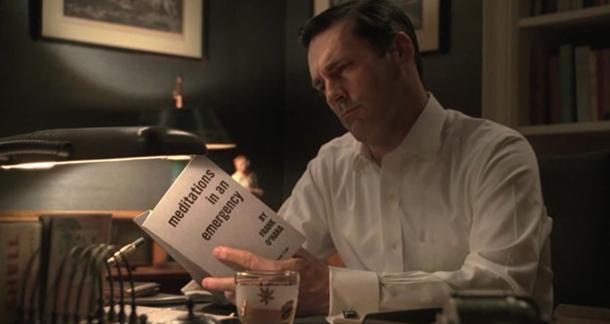 Mad Men finished its run on May 17. I'm super bummed out, man.

One of the things that made the show shine was its attention to detail. From the wardrobe to the set design, everything felt real, as if it had just jumped out of a 60s magazine. Like the show's characters, the creators sold the 60s to us pretty well. I'd love for someone to do some research on how many people started smoking since the show came on the air.

One of my favorite details is the various books they have characters read. While blogs and fans tried to read into them, predicting character arcs and future plot events, I don't believe they had any significance outside of the theme for that particular episode or the show itself.

So you're not gonna get some kind of exploration of Mad Men through the books from me. But I'd like to talk about the books anyway.

The book Don reads when he's flying for the Mohawk Airlines meeting, with Ted flying the tiny plane. The Last Picture Show, by Pulitzer-winning author Larry McMurtry, is a poignant story about youth and getting out of a small, nowhere town alive. Thalia is a piece of shit small town, mean down to its core. The book deals with Sonny and his buddy Dwayne, high school kids who spend their time chasing sex amidst the decay and loneliness of Thalia. 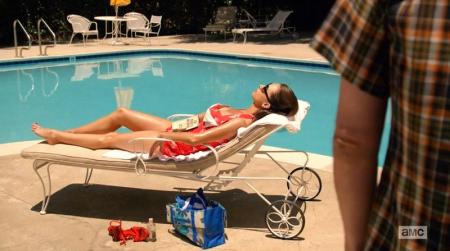 'The Woman of Rome' by Alberto Moravia

In the second-to-last episode, while Don is running away from his new job at McCANN, he sees a woman sunbathing at the motel pool. She's reading The Woman of Rome. Written in 1947, the novel deals with the intersecting lives of a prostitute, an intellectual, and a secret police officer in Rome under Mussolini. One of the classics to come out of Italy in the twentieth century, it's worth a read for the harsh cynicism that permeates it, the characters that Moravia plays against each other, and for a peek at life under fascism.

I wonder if Don would identify with the prostitute, who sleeps with men she despises but takes pride in being the best at what she does, or sees himself as the young intellectual—principled, but ultimately weak.

'Valley of the Dolls' by Jacqueline Susann

One of the books on Don's shelves (fans have eagle eyes), it was probably thrown there because of the similarities to the show's themes. Dealing with the life of three women in show business, it became a bestseller when it came out in 1966. The novel offers a realistic portrayal of the treatment of women in the industry at the time. It begins with the three protagonists all working on the same Broadway show and chronicles the next two decades of their lives as they struggle with work, friendship and men.

The title refers both to the women themselves and the prescription pills they consume (dubbed ''dolls'' in the book) in order to keep up.

'Confessions of An Advertising Man' by David Ogilvy

"It's called Confessions of an Ad Man. Please. It's the book everybody writes, only he got it published. It should be called 1,000 Reasons I'm So Great." Roger Sterling quips at Don.

The Ogilvy book he's talking about is a handbook to the world of advertising and executives. Written by ''The Father of Advertising,'' David Ogilvy, an advertising executive whose career spanned essentially the same decades covered by the show.

A book for all the prospective Don Drapers out there, you'll probably learn something from it even if you don't work in advertising. It is still being taught in advertising classes in the US. 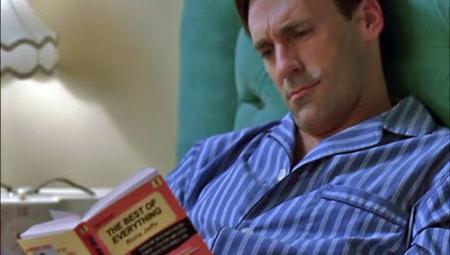 'The Best of Everything' by Rona Jaffe

Some light bed-time reading for Don as he lies next to Betty. An iconic novel about the lives of five women who work at a publishing company. Kind of a trashy novel, but it offers a rare glimpse into both cheap paperbacks of the 50s and the life of women working in NYC at the time. It was made into a movie (like a lot of the books in this article) that's pretty decent.

Makes sense that Don would pick it up, probably for the same reason he does anything—to get into the minds of the people he's trying to sell stuff to.

'From Those Wonderful Folks Who Gave You Pearl Harbor: Front-Line Dispatches from the Advertising War' by Jerry Della Femina

Quite possibly the most Mad Men book of the bunch, this is a memoir of real life ad man Jerry Della Femina. Published in 1970, it was repackaged after the success of the show. It even has a blurb that references it more than it does the book.

If you're into Mad Men for the wacky shenanigans, the drinking and the sex, this is probably a book you should check out. It doesn't pull any punches.

'The Crying of Lot 49' by Thomas Pynchon

Pete Campbell, probably feeling a bit like the book's protagonist, reads this on his train ride to work. A postmodern novel by Thomas Pynchon, it deals with Oedipa Maas, a woman who inherits the fortune of an ex-lover and as she attempts to settle the estate, stumbling onto what might be a great conspiracy involving the secret war of two postal delivery services. Yeah, it's weird. But great.

'Meditations in an Emergency' by Frank O'Hara

Who knew Don was a poetry man? After reading it in season two, he mails the book to Anna Draper with the inscription ''Thinking of you, -D.''

I don't know how to write about poetry. I'll leave you with this.

Each time my heart is broken it makes me feel more adventurous (and how the same names keep recurring on that interminable list!), but one of these days there’ll be nothing left with which to venture forth.

I left out some classics, like Dante's Inferno and Kerouac's On the Road because well, who doesn't know about those. Have you read any of these books? What did you think?