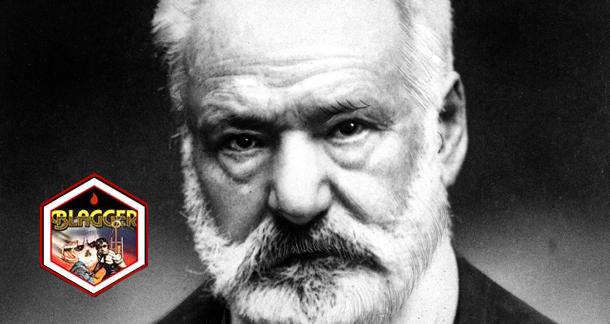 Wait! The guy who wrote Les Mis was called Ewgo, not Hugo.

And this is why the Blagger’s Guide is the best and only way to avoid literary embarrassment. Hugo was French and that’s how you pronounce his name in his native tongue.

Oh. Just the facts then, ma’am.

Victor Hugo was born on 26 February 1802 in Besançon, France. His father, Joseph-Léopold-Sigisbert Hugo, who despite his expensive name was himself the son of a carpenter, rose through the ranks to serve as a general in Napoleon’s army. The young Victor travelled most of Europe as his father moved from posting to posting, ending up in Paris at the insistence of his mother, who promptly started an affair with her husband’s commanding officer. This arrangement was tolerated in a very French way by the participants, with Mme Hugo’s lover becoming something of a father figure to her three sons.

Those adulterous Frenchies! Did Hugo follow in his mother’s footsteps?

Indeed. Hugo grew up to be an inveterate ladies’ man. Although married, he also indulged in a lifelong affair with the actress Juliette Drouet, who starred in many of his plays. Hugo’s relationship with Drouet was of such longevity that she eventually became accepted as a member of the family, but Victor continued to chase skirts on the side. One particularly energetic pursuit at the age of 76 resulted in a stroke. After that, we can assume that Victor settled down to a more sedate existence.

Did his active love life leave him time for any writing?

Bien sur. Hugo began his literary career as a poet, publishing his first volume – Odes et Ballades – at the tender age of 20. Never one to play it safe, Hugo made his Royalist sentiments clear in his verse, thereby earning himself a pension from Louis XVIII (briefly not in exile at the time) and a place in the public heart. Hugo followed this up with another volume of poetry four years later and then turned his attention to writing prose.

Was that Les Misérables?

Nope, you’re getting ahead of yourself. Hugo’s first effort was a cheery little piece about a man’s thoughts and experiences on the day before his execution. He followed this up with something longer and even less cheery, namely The Hunchback of Notre Dame.

Ewgo wrote that? I thought it was Walt Disney.

You aren’t taking this seriously.

Well all right. So Hugo’s first full length novel was a massive success, not least because it exorcised some of France’s lingering cultural guilt about the Revolution. Hugo’s story contains many parallels with what was then recent history: tension between the ruling class and the ordinary citizens of Paris, false accusations, summary executions, a corrupt religious hierarchy and hysterical mob violence. The public lapped it up, literary tourists turning up at Notre Dame in such numbers that the authorities were shamed into performing much needed repairs on the building.

What about Les Mis? Did he write that next?

Yes, if you discount the 30 years of other stuff he produced in between. Hugo continued to mostly write poetry and plays, but also began work on another full length prose piece, using his first novel (about the condemned man’s last day) as a starting point. Although France had stopped carting aristos off for their appointments with Mme Guillotine, the country was still convulsed with the effort of becoming a modern state. The resulting social inequality and injustice gave Hugo plenty of material. Eventually, Les Misérables reached completion. By then, Hugo had chosen to live in exile, first in Belgium and then in Guernsey.

No, not for tax reasons. Hugo left France when Louis-Napoléon (nephew of that Napoléon) dissolved the General Assembly and seized power. An inveterate Royalist (weirdly as his books are all about the wretched lives of those at the bottom of the social scale), Hugo gathered up his ball and left. This bout of pique did set the scene for one excellent fable. Because of his exile, Hugo had to communicate with his publisher by telegram. Anxious to learn about the reaction to his epic, it is claimed Hugo (always a thrifty soul) sent a terse ‘?’ by telegram to his publisher, who replied with a single ‘!’. Critics hated Les Misérables as much as the public loved it, which just goes to show you that nothing has changed in the world of literature.

But how could Les Misérables be a blockbuster if it’s all about sad people?

Les Misérables means ‘the wretched’ in French. Hugo’s story isn’t about the terminally depressed (If that’s what you’re looking for try Brett Easton Ellis), it’s about the French underclass. The story is long and convoluted, but for blagging purposes what you need to know is that it concerns the attempts of a former convict, Jean Valjean, to go straight. He tries to help a single mother, Fantine, who dies, and ends up adopting her orphaned daughter Cosette (the little girl featured in the movie poster). Through all his efforts to lead a good life, Valjean is pursued relentlessly by fanatical policeman, Javert, who wants Valjean banged up because of a parole violation. There’s a revolution, storming of the barricades, a dissolute family of thieves and a kindly priest, but the thrust of the story is that morality is more complex than following the rules.

#1 As well as writing two massive bestsellers and making a living out of poetry, Hugo produced some excellent quotes. Here’s a small sample:

#2 In maturity, Hugo dumped his ardent King-worship in favour of a very modern belief in a united Europe, spouting rhetoric about “glorious individuality [merging closely into] a superior unit [of] European brotherhood,” like some 19th century version of Angela Merkel.

#3 On his deathbed, Hugo asked for a pauper’s funeral. Attentive to his request, the authorities arranged an all-night vigil for his coffin under the Arc de Triomphe followed by a six hour funeral procession through the streets of Paris.