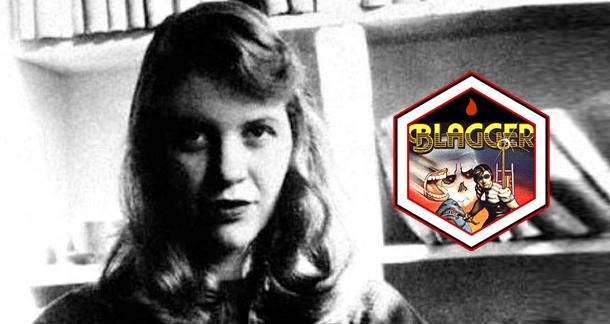 Sylvia Plath was born in Boston on October 27, 1932, and was raised in Winthrop, Massachussets, with her mother, Aurelia; German-American father Otto; and younger brother, Warren. Plath’s maternal grandparents lived a short distance from her family home and the young Sylvia spent much time in their house, built so close to the sea that she once remarked how after storms they would find the bodies of dead sharks washed up in the garden.

Obviously she had an eye for an interesting detail

Sylvia showed promise as a writer from a very early age, publishing her first poem in the Boston Herald at the age of eight. This was also the year her father Otto died, from, it could fairly be said, stubbornness. He developed diabetes, but self-diagnosed the symptoms as lung cancer and decided not to seek treatment. His death was highly traumatic to the young Sylvia. Her mother said that when told of his death, her daughter – who had prayed for her father’s recovery - responded, ‘I’ll never talk to God again.’

Careful now. Plath’s supporters are very touchy about their idol. Almost as sensitive as the Austenites…

Why is she an idol?

Plath’s supporters are very touchy about their idol. Almost as sensitive as the Austenites…

We’ll get to that in a moment. First a little more background. Plath excelled as a student, winning scholarships to both Wellesley and Smith colleges. She chose to study at the latter and by her third year was writing for Seventeen and Harper’s magazine. That summer Mademoiselle magazine (for which she had earlier won a story competition) awarded her a guest editorship. Plath moved to New York for a month and it was at this point that her mental health began to break down. This episode became the basis for Plath’s one novel, The Bell Jar, although its closeness to the events her companions and family reported during the time (down to the details of some of the clothes Plath wore), suggest the book is closer to autobiography than fiction.

So what happened to her in New York?

She suffered mood swings and became obsessed with the impending execution of the Rosenbergs (who had been sentenced to death for treason), which culminated in an episode where she threw all her clothes out of a hotel window. Upon her return home she was given ECT and sleeping pills. Sylvia broke the lock on the cabinet where her mother kept the pills, took an overdose and hid in a basement crawlspace. The ensuing hunt for her made the papers. She was found after three days, still alive. Her first words to her mother when Aurelia visited Sylvia in hospital were, ‘It was my last act of love.’

Somehow I don’t think it ended well for her…

You would be right about that. Yet Plath appeared to make a full recovery from her breakdown. Her mother had received a letter from Otto’s family with news that several of his female relatives had suffered from depression, but chose not to tell her daughter. Plath believed she was cured. She completed her studies at Smith and received a Fulbright scholarship to Cambridge. This is where she met the poet Ted Hughes.

In poetry terms this was like Joan Baez getting hitched to John Lennon. In 1956, the times they were a’changing, and under the influence of psychoanalysis and other mind-altering substances poetry was releasing itself from the charming if literal clutches of Auden and Betjeman, to become something much darker and more muscular. Hughes was the poster-boy for this process of liberalization, plus was also tall, dark and handsome and (according to contemporary reports) surrounded by a clutch of poetry groupies.

Plath beat off the groupies, married Hughes and settled down to a life of poetry superstardom. At first the union seemed to work. Her output increased, she ‘found her voice’ (which is in poetry terms similar to a band getting past that difficult second album stage) and her first volume of poems: The Colossus and other poems was published in 1960 by Heinemann, followed by The Bell Jar, which appeared in print in 1963.

So what went wrong?

The truth about what lay behind Plath’s suicide will never be completely clear... The safest conclusion is that it was a combination of her fragile mental state and the breakdown of her marriage.

That’s the big question and the point at which the Plath camps sharply divide. There are two versions about what happened to cause Plath’s death by suicide in February 1963.

Version 1) Plath’s mental instability and erratic behavior broke up her marriage with Hughes, who left her for a copywriter and family friend, Assia Wevill. Plath continued to deteriorate mentally, attempted suicide during the break up and followed it up by ending her life a few months later.

Version 2) Ted Hughes’ abusive treatment of Plath, which culminated in his deserting her and their two small children for Wevill, drove her to a mental breakdown and suicide.

It doesn’t matter which of these two versions you choose, voice either of them and you’re in trouble. It’s slightly more acceptable to align yourself with Version 1 than in the years immediately following Plath’s death. Her second volume of poems, Ariel, published posthumously by Hughes in 1965, became a huge hit. The subject matter was, like The Bell Jar, intensely biographical, with poems such as Tulips and Daddy explicitly referencing life events – her time in a mental institution and the death of her father respectively. This confessional tone and the circumstances of Plath’s death (alone with two small kids) collided hard with the emergent women’s movement, which was just at the point of requiring a good figurehead. Plath became that figurehead and for some time the feminist party-line was Version 2: that Plath had been done to death by the dark forces of the patriarchy, specifically Hughes, whose position was not helped by Assia Wevill’s suicide in 1969 (she, like Plath, gassed herself. Unlike Plath, Wevill also killed her and Hughes’ two-year-old daughter Shura at the same time).

Cripes! Not a happy story

No it isn’t. The truth about what lay behind Plath’s suicide will never be completely clear – many of those involved at the time, including Hughes, are now dead. The safest conclusion is that it was a combination of her fragile mental state and the breakdown of her marriage.

But was she any good?

Ah, that’s another very touchy subject. Because of her early death Plath’s output represents just a fraction of what other poets produced. Add to that her lionization by 1970s feminists and it’s hard to get a dispassionate view of her contribution, because for a long time criticism of her work was answered with accusations of sexism (not helped by the fact that most poetry critics were male). But as we approach the 50th anniversary of her death, perhaps it’s now possible to douse the rhetoric and assess Plath with clearer heads.

Some of Plath’s work is undoubtedly very fine and poems like Lady Lazarus and The Moon and the Yew Tree fully merit her place in the anthologies. The ‘confessional’ element to Plath’s work is what lets her down: it’s hard not to occasionally want to shake her hard by the shoulders when she starts going on about ‘Daddy’ yet again. The Bell Jar, beloved of adolescent girls, can be very hard to take as an adult. And remember, Plath was no baby when she wrote it. Her only novel came out when she was thirty years old, by which age she should have known better than to put her scars on display (an act of which she was also fond of in real life).

The Resurrection of Sylvia Plath's "Ariel"

Good article, and with a nice dose of wit in there.  I always felt a little unsure of Plath's genius.  Don't get me wrong, there are moments of brilliance and she absolutely deserves recognition solely as a poet without the trappings of the feminist movement that were attached to her.  But there are moments where she just seems to, well, labour the point a bit too much.  "Daddy" is a good example; there's real beauty in:

Marble-heavy, a bag full of God,

Ghastly statue with one gray toe

Big as a Frisco seal

And a head in the freakish Atlantic

Where it pours bean green over blue

In the waters off beautiful Nauset

A Jew to Auschwitz, Dachau, Belsen*

I think I may well be a Jew.

*I think that's the right order - I doing this from memory

It became a little tiresome and, maybe I'm misreading, but felt it was generally patronising and frankly naive-sounding.  Again, she goes for the Nazi/Jewish analogy in Lady Lazarus as well; still a fine piece of poetry, but a laboured point (probably worth pointing out that as far I remember Plath wasn't Jewish).

Enjoyed reading this though and will have me looking up her work again.

My junior year of high school, I got to pick a poet and write a research paper about him or her. I chose Plath. She was one of the few female poets on the list we were given and I was determined to break away from all the male writers in American Literature. We'd study nothing aside from male authors the entire year! In my research, I found that I only appreciated a small portion of her poetry. Her history, though very tragic, was much more interesting to me. The one thing I remember thinking was, "I hope I don't end up like her". Morbid, right? After getting my degree to teach English, I realized that Elizabeth Bishop is, in fact, a much better female poet ;)

I love your posts on here.