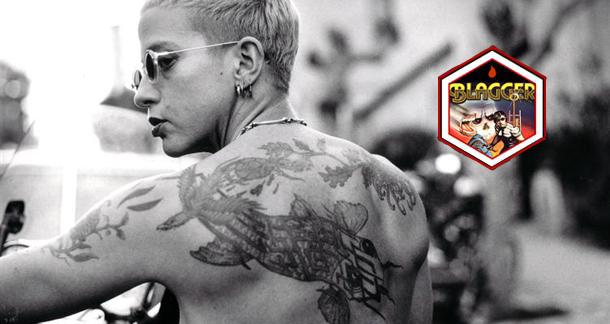 It says something about Acker that even the facts are hard to pin down. Depending on whom you believe Acker was born in 1944, 1947 or 1948. There’s more consensus about her family background which was affluent, New York and Jewish. Her father, Donald Lehman, deserted her mother while she was pregnant. Karen (as she was then called) grew up in material comfort but emotional poverty (or so she claimed) in New York’s Upper East Side.

From nice Jewish girl to punk princess and literary terrorist. How did that happen?

By meeting all the wrong people. Young Karen Lehman started hanging out with underground film makers and experimental poets. This was in the early 1960s, just at the point when Warhol founded The Factory and Allen Ginsberg was beginning to think about taking off his clothes. The scent of cultural rebellion was everywhere. By age nineteen, Karen had become Kathy, had married and divorced – which is where she picked up the surname Acker – and was studying at Brandeis under renowned New Marxist, Herbert Marcuse.

When Marcuse departed Boston for San Francisco, Acker went with him as his teaching assistant, continuing to study and eventually graduating with a degree in Classics. San Francisco put the finishing touches on what New York had begun. Acker became involved in the nascent feminist movement and learned about conceptualism from the poet David Antin.

Whoa cowboy! What on earth is conceptualism?

A good question. For blagging purposes, what you need to know is that conceptualism is not about using art to represent a version of the world. It’s about using art to evoke an emotional response, preferably by combining a variety of techniques and/or disciplines.

Are we talking about multimedia installations here?

We certainly are. And performance art, experimental music and ‘anti-art’ networks such as the Fluxus movement.

Oh oh. Not exactly living the dream then?

More like gathering material. Acker scented hypocrisy in the hippie movement, which promoted the idea of free love, but could be highly maiden auntish about issues like prostitution and homosexuality. Her way of exploring conceptualism was to become highly interested in sex, or more specifically, the intersection between sex, language and politics.

That’s the point of blagging – you don’t have to.

Small presses started to pick up on her work and the burgeoning punk scene required literary expression. Acker developed a reputation, won a Pushcart Prize for one of her short stories and decided to see what would happen if she appropriated not just a few passages from other writers but a whole work of literature.

With her tattoos, shaved head and piercings, Acker fit right in to punk’s image of itself. She moved to London, capital of punk, where the media was busy convulsing itself over images of Our Dear Queen Elizabeth with a safety pin through her nose. Acker had now hit her stride. In 1984 she managed to secure a deal for her next work with Picador, a main-stream publisher.

But what is it about? I need to know in case someone asks…

Acker’s books are never really ‘about’ anything, but she did try to help the reader by focusing the narrative on the sexual adventures of a ten year old girl. There’s a bakery, a Persian slave trader and a trip to Alexandria with Jean Genet. Some of the material is probably autobiographical and because Janey, the protagonist, has an incestuous relationship with her father, commentators were for a while all in a froth about whether Acker herself was abused, which helped to further enhance the book’s prurient appeal.

Blood and Guts in High School catapulted Acker from the sidelines to the mainstream. Feminists pounced on it as support for the then-popular ‘all penetrative sex is rape’ manifesto. Intellectuals pontificated about post-structuralism. Radicals saw it as biting social commentary.

Acker, to her credit, refused to capitalize, although the opportunity to become the received wisdom on all matters countercultural did present itself. She just carried on being Acker, parrying questions about her work with references to her weird Jewish sense of humor. She continued to explore, never seeming to be too bothered about whether people liked/appreciated/understood what she did.

She was – one of the very few authors not to buy into her own hype. She did take advantage of the commissions which inevitably came her way (including an interview with the Spice Girls for the Guardian newspaper) and took on various visiting professorships, but never alighted in one place long enough to become a fixture. She died from breast cancer in 1997 at the age of 54/50/49.

I didn't know that, but I'd beleive it.

The fun part about reading her stuff, is that it's so deeply mired in subconcious regurgitation, the WEIRDEST stuff permanently sticks out.  You read an entire book about vagina, but can't get the second hand sweater purchase scene out of your head.