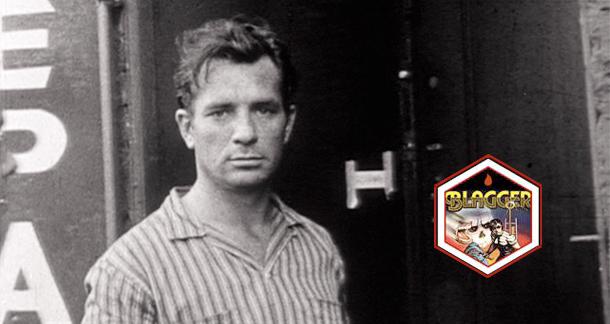 Jean Louis Kerouac was born in Lowell, Massachusetts on 12 March 1922. His family was originally French-Canadian, from Quebec, one of the many which emigrated from Canada to New England to work in the mills there. Like many migrants, the Quebecois formed enclaves in their new home towns and legend has it that Kerouac grew up speaking French.

He was. His mother, Gabrielle, clung to her heritage, but his father Leo – a printer – encouraged his son to fit in and succeeded, at least for a while. Kerouac became a High School football star and received offers of scholarships from both Boston College and Columbia. Maman wanted Jack to go to Columbia, Papa wanted Boston College. Jack chose Columbia.

Kerouac did confess that his mother was the only woman he ever really loved. Anyway, the choice of Columbia was fateful, because this is where it all went wrong. It’s hard to pin down exactly what, but Kerouac suffered a leg injury, failed to make the team, failed a Chemistry course and then on his return to Columbia for his sophomore year, left after a few weeks. He had vague plans at this point to enlist (this was 1941 and the US had just joined the war), but instead drifted through a couple of jobs, including one writing for the local paper. Then in the kind of impulsive decision which would become characteristic, Kerouac enlisted as a Marine and a Coast Guard on the same day. Then he ran away to sea.

After a six month trip to Greenland as part of a convoy, Kerouac returned to college. Then he left again, because he was benched for the first game of the season. Then he joined the Navy.

The Navy put up with Kerouac for a few weeks before sending him off to a psychiatric hospital for observation. Then they discharged him.

He wasn’t a model son. But during all this time, Kerouac was writing. By the time he met William Burroughs in 1944, he claimed to have written the million words prescribed by Ray Bradbury as the writer’s minimum initial investment in the craft.

Everything important that happened to Kerouac happened in the ten year period after his discharge from the Navy. Early on, he met Burroughs and Alan Ginsberg and became a fixture in their loosely configured group of artists, musicians and writers. His father died in 1946 and Maman quietly let her son live at home for a couple of years, working on a novel – The Town and the City. During this time Kerouac also met Neil Cassady and one of the world’s greatest bromances was born.

This friendship proved to be a massive stroke of luck for Kerouac. The Town and the City, despite being carefully modeled on the work of Thomas Wolfe, which Kerouac believed guaranteed literary success, really wasn’t very good. But it did firmly establish that Kerouac’s creative talent as a writer was limited to lightly fictionalized autobiography: the only way he could write good stories was to live them.

Enter Cassady – reform school alumni, hard drinker, charmer, metrosexual and general force of nature. He even looked like Kerouac. It was a match made in heaven. After a whirlwind romance  in New York, during which Cassady seduced Allen Ginsberg and ensnared Kerouac by asking Jack to teach him how to write, Cassady got bored and headed west. He sent love letters to Kerouac from Denver, who, having finished his Great Novel – this was now the summer of 1947 - decided to demonstrate his commitment by hitchhiking from New York to Colorado.

It took several tries. No one would give him a ride. It rained. He got wet. He went home. But Kerouac was made of sterner stuff. He made another attempt and eventually made it to Denver. This trip and his subsequent adventures with Cassady formed the basis of On the Road.

And the rest is history?

Pretty much. Although Kerouac found a publisher for The Town and the City, getting On the Road into print took more time – about five years from its completion in 1952. The content was explicit (for the time) and Viking, who took it on, suffered from fits of nerves about being sued for obscenity. The delay did give Kerouac the opportunity to embroider his myth, of which the highlights are his practice of creating huge rolls of paper to feed into his typewriter so he could write without a break, his invention of the phrase ‘The Beat Generation’, and most especially his ménage a trois with Neal and Carolyn Cassady (a story which got Hollywood tight enough in the man-panties to lead to a truly terrible movie, with the massively miscast John Heard as Kerouac).

But once published, On the Road became a massive success and has stayed a massive success. Its story of free spirits, journeys of the soul and the search for life’s meaning struck a chord with the post war generation and graces the shelves of many a student bedsit to this day.

But what is it about?

Sex, drugs and driving around America. Sal Paradise (Kerouac) whose life is in a rut, meets the freewheeling Dean Moriarty (Cassady). The pair get laid, smoke pot, get drunk, dodge the law and eventually wind up in Mexico where Sal gets sick and Dean dumps him. The main thrust of the story is Sal's gradual disillusionment with Dean, as the charm wears off to reveal the irresponsibility underneath. The story is essentially an account of Kerouac's five years hanging out with Cassady, with the names and some of the details changed.

The success of On the Road guaranteed everything else Kerouac wrote got published (even, most recently, The Sea is My Brother, produced during his time with the convoy and which he himself described as ‘a crock of shit’), but none of his other books resounded with the public the same way. Always an enthusiastic drinker, Kerouac gradually and quietly descended to the bottom of a bottle of whisky. This seems to have been a deliberate strategy: he once told the poet Fran Landesman that as a devout Catholic he couldn’t commit suicide, but instead planned to drink himself to death.

The plan worked. On the evening of October 21 1969, deep into a bottle of his preferred liquor, he began to vomit blood. After an emergency operation he failed to recover consciousness and died. He was 47 years old.