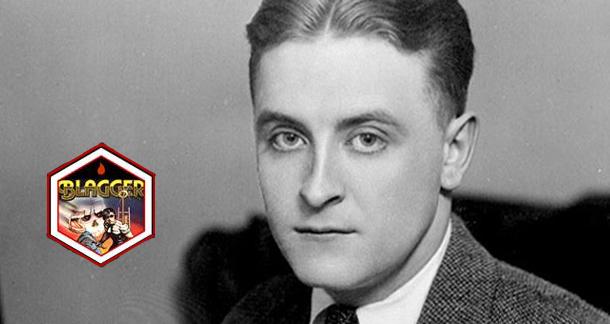 Do I get a blag-point for already knowing Fitzgerald was a lush and had a mad wife called Zelda?

No. Everyone knows that about Fitzgerald. Null blag-points.

Francis Scott Key Fitzgerald was born on 24 September 1896 to a well to do family of Irish-Catholic descent (who clearly believed three names were better than one). Fitzgerald’s mother came from money, his father did not and also failed at business, meaning the family mostly lived off his wife’s fortune. This sense of failure and the erratic behavior of Fitzgerald’s mother formed the basis for his particular take on life.

Was Mrs. Fitzgerald also mad then?

Not as mad as Zelda. But we’ll get to her in a moment. Fitzgerald zipped through school and Princeton without leaving much of an imprint, except on the local bars. The alcohol habit came early and so did success. In a fit of patriotism, Fitzgerald enlisted in 1917, then realized he might die without ever being published. He therefore penned a novel (aptly called The Romantic Egoist) and frantically subbed it. This was rejected, but got him enough interest to make him think he could make writing work.

He didn’t die either.

No. WWI ended before he could be deployed, but his military career was fateful in another way, because it was during his time at Camp Sheridan in Alabama that he met Zelda. This was the second boost to his writing career. Like the mater, Zelda came from money. She refused to marry Fitzgerald unless he could keep her in silk stockings and champagne. Nose pressed firmly to the grindstone, Fitzgerald revised The Romantic Egoist (now renamed This Side of Paradise) and sent it on the rounds again. This time it was picked up by Scribner.

How did it do?

Very well. This Side of Paradise was a lightly fictionalized account of Fitzgerald’s exploits at Princeton. Descriptions of young people guzzling booze and – the horror! – kissing made sure the book was a massive, Fifty Shades of Grey-ish, success. The first run of 3,000 sold out within days and while Fitzgerald did well from these sales, the short story market proved even more lucrative. Soon he was able to command $4,000 per story.

Which he carefully put away in a savings account for his retirement?

Not exactly. Scott and Zelda behaved pretty much like you’d imagine Justin Bieber would if he slipped his minders and got together with Lindsay Lohan, creating a myth which was eagerly lapped up by their fans. Fitzgerald coined the phrase ‘The Jazz Age’ which he then went on to live, very much in public. The birth of their only daughter, Scotty, caused only a fractional pause in the partying. Fitzgerald rapidly got into the position of writing to clear debts. The lucrative short stories helped, as did good if less spectacular sales for his second novel, The Beautiful and Damned, another story about dissolute (if slightly older) youth. Then in 1925, after a three year pause to gather material, Fitzgerald brought out his third novel, The Great Gatsby, and waited for the royalty checks to roll in.

Correct. In comparison to his previous work, Gatsby was a flop. The story moves from outrageous youth to married couples, the themes darker and more complex. Gatsby is a former racketeer, now turned socialite, who is spending the summer on Long Island and passes the time by throwing elaborate parties. Gatsby, we soon discover, is a man who has invented himself: his friends are purchased, his most trusted companions his lawyers and accountants. There’s only one thing which animates Gatsby and that is his love for former sweetheart Daisy, now married to the abusive and casual womanizer Tom Buchanan.

Sales for Gatsby were respectable, but nothing like the stellar performance of This Side of Paradise. Worse, the reviews were lukewarm. Fitzgerald was crushed and even more crushed when Zelda broke their unspoken compact and had an affair with a French aviator.

Oh la la!  What happened then?

It all went pear-shaped. Between 1925 and 1937, Fitzgerald did very little writing and lots of drinking, much of it in Paris in the company of that other famed literary lush, Ernest Hemingway. Zelda decided to try and become a ballet dancer during this time and ended up having a nervous breakdown. She spent the rest of her life moving between various sanatoriums, being eventually diagnosed as a schizophrenic. By 1937, Zelda was permanently hospitalized and Fitzgerald was broke. He did the only sensible thing under the circumstances. He moved to Hollywood.

He made good money – MGM hired him at $1000 a week – but almost nothing of what he produced saw the light of day. Fitzgerald took up with the journalist Sheila Graham, did some uncredited work on Gone With the Wind, attempted to substitute Coca Cola for hard liquor with limited success, and died of a heart attack in 1940. He was buried in Maryland. Zelda was too sick to travel to his funeral. She died in 1948 when the hospital where she was a patient burned down. She was buried beside him.

But if Gatsby  was a flop, how come it’s so famous now?

Fitzgerald is a perfect example of a writer whose career rested on the wrong books. Imagine Dan Brown going literary and the reaction that would ensue. Fitzgerald made his name writing brittle, clever, slightly shocking stories. When he turned his considerable talents to deeper subjects, his fanbase recoiled. It was only after his death that a new generation of readers and critics could reevaluate his work.

Patton Oswalt's Night Café, 'The Great Gatsby' and How Guided Reading Can Reinvigorate a Classic

He went to Hollywood, yet he never stepped in front of a camera. There's a few bits of silent newsreel and that's it.