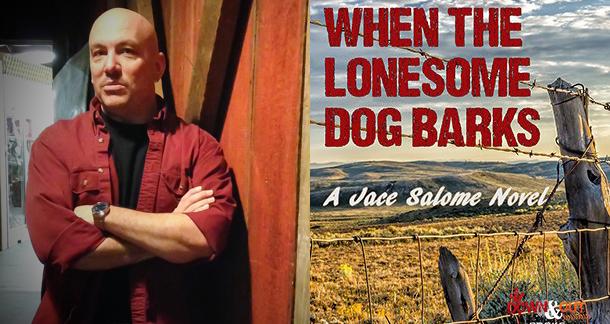 …[Jace]…looked at the cells. Fifty cells on the bottom tier, fifty cells on the top tier. Most nights handfuls of inmates watched the guards. Men and women who couldn’t sleep, who couldn’t stand a silence punctured by the awful dreams and night moans of others, who hated the near-constant whack of the electric locks, who worked themselves into a quiet storm over being locked up.

But tonight, with all that had gone on, there was only one man staring out at her.

The inmate she’d laughed at.

When she nodded in acknowledgement, he never moved, his expression fixed and furious.

—From When the Lonesome Dog Barks

A harsh mistake; one that Jace Salome promised herself, in the first novel, Slow Bleed, she’d never make. Another correctional officer had laughed at an inmate and Jace had thought it horrible. Yet here she is, in the newest Jace Salome novel, doing the exact same thing.

Yet long before Jace made that mistake, I did. An inmate in my jail, a bully, anti-social, low-end man who got his rocks off by exploiting everyone around him managed to get crosswise with a newbie inmate who was bigger, stronger, and smarter, and who’d been picked on by bullies most of his life. By the time I made it into the cell block to stop the fight, it was over and the bully had been invited to cogitate on his life-mistakes.

So how did my rookie mistake become an on-going theme? Funny you should ask…

How did my rookie mistake become an on-going theme? Funny you should ask…

A 2006 reading, me and two other writers. I was shilling 2,000 Miles to Open Road, the first of my Barefield trio, but I was tossing around a new thing in my head. It was still amorphous, the boundaries undefined, the cosmic flavor basically dark matter.

A reader asked about character creation and one of the writers, who might have been male or female, told a story about having done a metric ton of market research, having talked to readers, having pried open editors’ heads, etc., etc. Ultimately, this writer told the crowd s/he chose a female protagonist and the crowd oooohed and aaaahed over the brilliance in approach to market forces and reaching as wide an audience as possible.

Great story. Uplifting and inspiring and—

The reality of that writer’s new series was vastly different. Yet in spite of that author’s invented version of the story, they had hit upon a truth that lodged somewhere deep inside my own dark matter: women do buy most of the books, but most of the writers in our genre, until recently, have tended to be men writing male characters.

(Please don’t email me screaming that I’ve missed an entire sex of writers…Laura Lippman, Val McDermid, Tana French, Natsuo Kirino.  These women, and tons more, are muscling their way to the top of the Hit Parade and they are stunningly tough and not only writing outside the box, but actually setting the box on fire. And yes, they’ve been writing for years, but at the time of these events, they weren’t yet quite popping up on the radar.)

I had written all kinds of viewpoints before—men, women, children, monsters, ghosts and apparitions, black, white, straight, any degree of LGBT—so I was comfortable slipping out of my male skin and into a skin-suit belonging to a woman. Donning an X chromosome in trade for my Y was not what made me uncomfortable. What made me uncomfortable, which for me always translates into oddly excited, was that I might set this female protagonist down in a world peppered predominantly with men; men who bulged with maleness and refused to stop spraying their eau de testosterone everywhere.

The added bonus is that she would be a woman at the start of her career rather than the top of her career, as so much police procedural crime fiction does. This way, the audience and I would travel with her and see it all first hand.

Here’s part of what I wrote in the afterward to my 2009 collection Remembrance and Regrets:

This was an interesting story to reread for this collection. While I remember writing it in 2003, I hadn’t realized until I reread it that it is a prototype story…a first run draft…of a much larger project written in 2008 that I hope you will see soon.

Usually, when I write, I am happily lost on location and plot. That’s how I like to write, the journey of discovery being my engine. But with Slow Bleed, I realized I was only lost in plot, not location. The why was in the story "Behind the Bars": I had strolled those hallways filled with angry inmates and cops and their life and death issues years earlier, giving myself a partial roadmap without even realizing it.

In that story, the female cop was the jail administrator rather than working a shift in the jail, and I wrote that story before I started working in law enforcement. In other words, my brain was already working on Jace years before I put metaphoric pen to paper. The interests that would bring me to Jace’s threshold were already in place and I, as a writer, was simply tasting different aspects of them before I found the one that worked best for me.

Ugh. Maybe that’s not the most elegant analogy. I can see the headline now: Writer/Deputy Compares Writing to Being a Serial Killer.

Great. That’ll do wonders for my next promotion.

Trey R. Barker is the author of the Jace Salome novels, the Barefield series, as well as other novels, collections, non-fiction, and hundreds of short stories. He spent seventeen years, off and on, as a journalist before moving into law enforcement. Currently, he is a sergeant with the Bureau County Sheriff's Office, the crisis negotiator for the regional special-response team, and a member of the Illinois State Attorney General's Internet Crimes Against Children Task Force. He lives in northern Illinois with three Canine-Americans, though he was born and bred in west Texas.