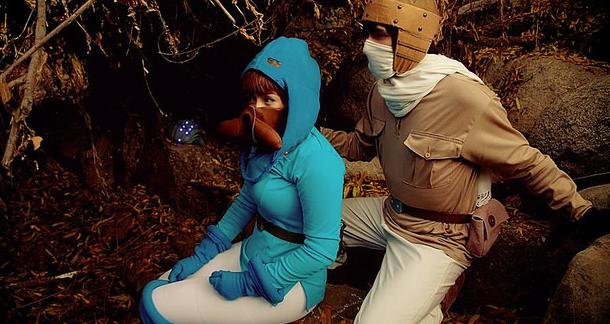 Revered Japanese storyteller and director, Hayao Miyazaki, recently announced that he is retiring. His last feature film, The Wind Rises, debuted in American theaters in February to critical acclaim and an Oscar nomination.

Over the past four decades, Miyazaki’s stories have inspired writers, artists, and filmmakers across the globe, including Tom Hammock and Megan Hutchinson of Will O'the Wisp. On the other side of the coin, Miyazaki’s films have also drawn inspiration from writers. Howl’s Moving Castle was an adaptation of fantasy author Diana Wynne Jones’ novel of the same name, and the filmmaker has voiced his love of Roald Dahl in past interviews.

After watching The Wind Rises, a story about an ambitious young airplane engineer, I began to think about the strong similarities between Miyazaki’s films. Although they are all very distinct stories, many themes (such as flight) and character archetypes reappear in nearly every one of his productions.

Swiss psychologist Carl Jung postulated that archetypes are “primordial images,” or figures that developed early in the human experience and have remained in the collective unconscious ever since. Archetypes appear in an understandable, crystallized form in mythology and literature that spans time and cultural divisions. By tapping into these ancient themes and characters, Miyazaki has created a body of work with strong universal appeal. What makes the films worthy of study for writers is that they draw so skillfully from a well of inspiration any human being can access.

Miyazaki has created a body of work with strong universal appeal. What makes the films worthy of study for writers is that they draw so skillfully from a well of inspiration any human being can access.

Great storytellers often return again and again to explore the same ideas. Each subsequent interpretation brings subtle nuances and a more mature understanding of deceptively complex subjects. The following are just a few of the archetypal themes and characters present in Miyazaki’s past films.

The trio actually consists of three archetypes: an innocent, a caregiver, and a witch. Nearly every Miyazaki movie includes a young virginal girl, a “dark” independent or misguided woman, and a wise, benevolent older woman. Howl’s Moving Castle, for example, plays with this dynamic quite a bit. Sophie, a quiet girl who places other’s desires before her own, is transformed into a crone by a sorceress who sees her as a romantic rival. It’s only as an old woman that Sophie learns to appreciate her youth. In this movie, one character represents both the innocent and the caregiver.

Nausicaa, the main character of Nausicaa of the Valley of the Wind, is an ideal personification of the mythic hero. Through self-sacrifice and physical pain, she fulfills an ancient prophesy and saves her kingdom. Ashitaka of Princess Mononoke also embodies many classically heroic traits; once again obtaining a kind of salvation through suffering and trial.

Adolescence and the transition into adulthood is another motif explored in most Miyazaki films. In Spirited Away, the story doesn’t really begin until the protagonist, Chihiro, is separated from her parents. In the space between being cared for completely as a young child and growing to self-sufficiency, most people feel like orphans at some point, which may be why stories about orphans carry so much resonance (Harry Potter, anyone?). Kiki's Delivery Service is about a 13-year-old going off into the world alone, and both main characters of Castle in the Sky are parentless.

One of Miyazaki’s signature themes is flight. Porco Rosso, Castle in the Sky, Kiki’s Delivery Service, and now The Wind Rises all focus significant attention on flight or aeronautics. Flight serves as a kind of liberation or freedom. Especially in The Wind Rises, the air becomes a place where the laws of being earthbound need not apply, and dreams can be born into reality.

Destruction of the land and forests is a cause for tension in numerous Miyazaki movies. Even the gentle My Neighbor Totoro, although largely free of conflict, embraces a sense of naturalism. Films that more candidly oppose pollution include Princess Mononoke, Ponyo, and Nausicaa.