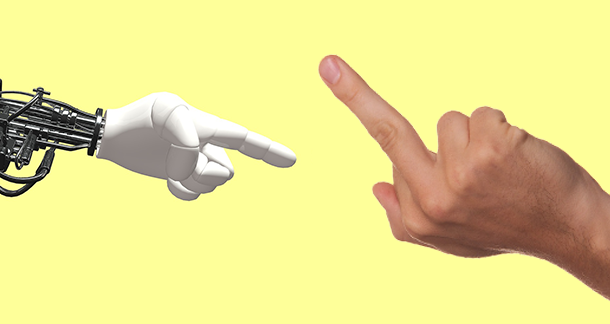 Compared to Judgment Day, during which intelligent machines will bomb humanity down to a pile of charred skeletons, I guess an AI writing a novel seems like a pretty benign thing.

I mean, what if I have an ugly skeleton? I have no idea what my skeleton looks like, and maybe it looks all weird and all the surviving robots will make fun of it.

Unlike Judgment Day, the AI-written novel is coming. Much like the intro to this column, the AI novel will be confusing, silly, and utterly without purpose.

AI, as we’re discussing it here, is not Johnny 5. It’s not Wall-E. It’s not even Arnold in Terminator 2, capable of being a better father than any human man in John Connor’s very specific circumstances (a harsh indictment on fatherhood that went mostly unnoticed, probably because that movie also has a liquid metal robot police officer).

The AI that would write a novel is a collection of data processed in a specific way. There is no consciousness there. It’s no more aware than a sifter, a machine with a series of vibrating trays that sorts bolts by size. It’s doing a more complicated task, but it’s got no desires, no agency.

The AI novelist is not the hero we were promised by movies. It's a passionless, thoughtless machine.

And reading the AI novel is not connecting us to a single human soul, which is one of the rare pleasures of books. It's not someone letting us into their head, just for a little while.

Is it too early in this column to talk about souls?

Let’s talk about something more practical.

Why Are We Turning Over the Fun Part of Being Alive?

Say you manage a rapidly-expanding business, and you hire help.

Do you hire someone to go home to your family, eat your meals, watch your Netflix queue, and live your life?

You know, the fun stuff?

Hell, no. You hire that person to answer emails, manage your company's social media, and probably do some nonsense with spreadsheets.

Give me the AI spreadsheet that can build and fill itself. The crap work. The boring stuff. The stuff we do in order to make just enough money that we have time to write.

But, What If These AI Novels Are Good?

Let me ask you something: Have you run out of good books to read? I don’t know why I even asked that, because of course you haven’t.

We enjoy better access to a larger number of books than any humans in history, not to mention TV and movies and podcasts. We are so far from The Great Narrative Shortage right now, a shortage that will never occur unless humanity has collapsed completely, in which case we'll have much bigger problems than finding a cozy mystery.

There is no dearth of shit to read. This is not a task we need to turn over to machines for the sake of production.

The weird thing about an AI novel will be its existence, not its contents.

The weird thing about an AI novel will be its existence, not its contents.

Because the goal of an AI novel is to “pass” as being written by humans, the AI novel will most likely be…pretty boring. If it ended up super strange, people would point to that as proof it’s not written by a human, and it would fail in its attempt to be mistaken for a manmade story.

Which, again, we've got plenty of already.

Twitter AI has given us what we want: conflict.

And we have, in turn, given the Twitter AI what it wants: more of us using Twitter more often.

Let's not get into the ways social media AI is designed to push our buttons, release chemicals in our brains, all that shit. Let's not discuss the evil of marketing, which sees your dreams as their next frontier. Let's instead consider that the AI novel will remove books as a possible refuge from that sort of AI interference.

The AI novel isn't a story, it's a manipulation. It's a calculated attempt to create in humans certain feelings, not for the sake of experiencing the range of human emotion, but for the sake of selling more books. Or Pepsi. Or whatever.

What is the point of removing our oasis of books? Of purposely tearing down one of the few media spaces where we can relax and enjoy in peace?

I know there’s very little love out here for the big A of online commerce.

Let me ask you, if an AI can write a novel, who is going to own it? Some artist collective, or will it be Amazon?

Amazon, the company with more data on readers and reading than any other? The company that knows everything about everyone’s reading habits, including which page they quit on, how quickly they read through certain books, and which books they buy and never actually get around to?

Is there anything Amazon would love more than the ability to generate novels automatically, sell them on Kindle, and completely cut out the need to share any profits?

Is there anything desirable about this Amazon-centric outcome?

Is there any prayer of avoiding it?

Alright, I wasn’t going to get all cosmic on you. But let’s get cosmic.

There’s a theory of magic that says magic used to exist, but what happened is that as people discovered it and codified it, tested and figured and then wrote down the rules of magic, magic faded away. Because magic defies definition, and when you define it, it’ll change or move away from your definition.

By creating AI novels, we’re creating rules for commercially successful writing through the use of big data.

From a magical standpoint, AI novels are a destructive process. Yes, the AI brings forth a novel. But it has to tear down a whole lot of magic to do it.

Get The Age of Spiritual Machines: When Computers Exceed Human Intelligence by Ray Kurzweil at Bookshop or Amazon

Get The Myth of Artificial Intelligence: Why Computers Can’t Think the Way We Do by Erik J. Larsen at Bookshop or Amazon