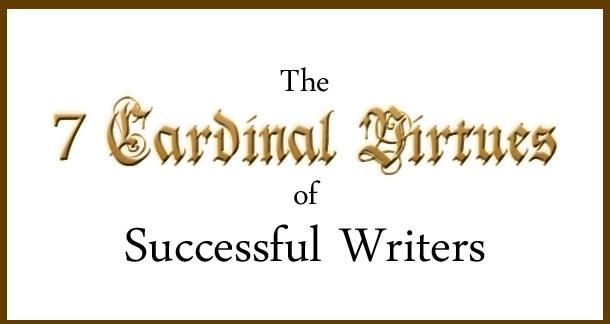 While the seven deadly sins are generally agreed upon, there are many lists of life's most important virtues. Today I will bring you another such list: Here are the seven cardinal virtues of successful writers.

I've said it before and I will keep saying it until it gets stuck on loop in your own head: To be a writer, what you have to do is write. Everything else you need to know can be picked up along the way.

A daily writing routine will move you far closer to your writing goals than any reading project or theoretical study ever could. For many would-be writers, failure happens due to a sin of omission: The work they've written can't be bad because it's failed to exist. Let's make it clear that unwritten work is worse than a badly-written piece. What's more, you will have to churn out many bad pages before you write anything decent. If you're not diligent, you'll never even reach the point of mediocrity.

Those who fear failure will be defeated by it while those who befriend it will thrive. The inherently random nature of creativity means that we, as writers, are engaged in constant experimentation. Some of those experiments are downright weird, but so what? No scientist who fears the possibility of an incorrect hypothesis can discover anything new; no writer who fears a creative leap can ever soar. Failure is not the opposite of success; it is the gateway.

Michael Jordan said, "I’ve failed over and over again in my life, and that is why I succeed." Thomas Edison said, "I failed my way to success." If you want to succeed as a writer, you'll have to get comfortable working, sleeping, and breathing in the realm of failure.

The most important gift many talented writers were born with is the gift of delusion. They start out with an unfounded confidence in their ability, certain that their writing is fantastic and their voice needs to be heard. Because of this, they are willing to stretch themselves, put in the necessary work, invest in education (academic and otherwise), and—at the end of the day—accept the heavy identity of "writer."

If you already think you're great, hold on to that belief (even though you are probably wrong). If you lack confidence, be willing to delude yourself. Believe you're fantastic and important. Only accepting this false belief allows it to become true.

4) HUMILITY to check your ego at the door

Despite the need for self-delusion, writers also need to be willing to set that inflated ego aside. When it comes to getting feedback or revising a piece, I've seen too many would-be writers shoving aside any critical feedback. Remember: It's a workshop, not a wankshop. You have to be ready to do the hard work despite the discomfort.

Yes, it's crucial to believe in yourself and your abilities—but you have to care more about the story than you do about your ego. Successful writers need the ability to accept feedback, be open to criticism, and otherwise allow themselves to be broken down so they can be built back up again.

Getting rejected is part of the gig, but it's not just some collection of words the publisher is turning down. It's us, as writers. Writing is simultaneously a public and a deeply personal act. It's a form of exhibitionism, but instead of scaring strangers on the late train, this sort of self-exposure leads to people shaking their heads calmly and saying, "No, we don't like what you've shown us. It just doesn't have the qualities we're looking for." (Imagine the exhibitionist walking from the train with eyes down-cast.)

It would be nice if the development of "thick skin," the de-personalization of the work, the constant reminders that this is a "numbers game," and every other strategy and excuse we use—it would be nice if those actually made rejection easy. It may get easier, but it's still rough. What's required is not the ability to bypass the pain of rejection. What's required is the ability to face it down over and over again.

6) PATIENCE to keep going despite that rejection

You will fail. You will be rejected. You will learn a little. You will get slightly better. Eventually, you will be able to look back and say, "Two years ago I thought I was great, but I was rubbish. Now I'm really good." Then you will realize that this probably isn't true: You're probably just an idiot who needs another two years to realize just how bad you currently are.

Rinse. Repeat. Get better by tiny increments. Give it a few years and you may achieve mediocrity. Give it a decade or two and you might even get good. This is not a lifestyle for those who lack endurance. Patience, more than anything, is mandatory for mastering the craft.

I said I'd tell you the seven virtues for successful writers. I never said they would all be virtues I possess. Still, in my time as a freelance editor and a writing-community organizer, I've been reassured—and concerned—by how often I've seen other writers demonstrate a similar shortcoming. As a group, this is probably our biggest problem.

We get a great idea and we feel juiced, ready to jump in, eager to plow forward. A few pages or chapters in we lose that energy. We abandon the work we've done. Every so often we finish a project, but the net result is a giant stack of incomplete work. Committing to regular writing helps a great deal, but sometimes you'll need more than that. Sometimes you'll need the simple, harsh self-control to finish your current work, even at the expense of your "next great idea." Learning to follow through will make the difference between a life of accomplishment and a life of loose ends.

Like so many virtues, the cardinal strengths of successful writers may not all come naturally to you. Adopting these virtues will require practice and persistence. However, by focusing on these strengths and being aware of your shortcomings, you can improve your personal satisfaction, your average output, and your capabilities as a writer.

EricWojo from Livonia, Michigan is reading The Brothers Karamazov June 19, 2013 - 9:45am

"No scientist who fears the possibility of an incorrect hypothesis can discover anything new; no writer who fears a creative leap can ever soar."

As a cheerleader for Dawkins et al and as a writer, this is my new mantra.

Thanks again for another encouraging essay.  When I read this piece it reminded me of what a professor in Art school told a group of as we neared graduation.  He said, "Being an artist is a tough job because no one makes you do it."  Thesame can, and should, be said for writing.

"Remember: It's a workshop not a wankshop" should be the opening introduction to all workshops.

The "no one makes you do it" comment Tom1960 left part really is the hardest for me. I'm really good at 1 and 3. Working on the rest. Diligently. Well, actually, I have no choice. This is the only job I've got. Nobody else will have me.

Failure is not the opposite of success; it is the gateway.

Patience is especially true with me.  I look at the first long story that I wrote and cringe.  When I finished it five years ago I thought it was the greatest thing ever.  Since then I have decided to put it on hiatus, but will be rewriting sometime this year.

It's a workshop, not a wankshop.

So much truth. I laughed, and laughed.

Another good one. Thanks for this, Rob.

Excellent- I needed to read this thank you.

I shall print this out and tape it to my desk!

I love the way this post made me laugh at myself, nodding my head in agreement with every number.   I've never been much of a self motivated finisher, but damn can I start a lot of projects!  This list is a great one to post close to my computer to remember to finish what I started instead of chasing that next big idea.

LadyWordslinger from Lower Sasnak is reading If I tell you what I'm reading, I'll have to change it every time I finish one book and start another. September 17, 2013 - 11:39am

'Being an artist is a tough job because no one makes you do it."  Thesame can, and should, be said for writing.'