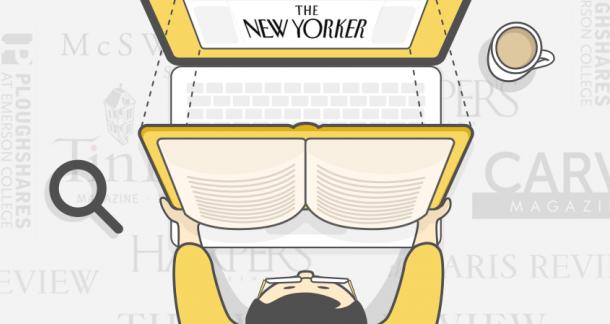 While many sources have been heralding the decline of literary reading and short stories as a medium, the strange truth is that there have never been as many great places to find quality short fiction. College-based reviews continue to thrive, in some part due to their prestige and institutional funding. Also, the internet has made it possible to access a global audience, and as a result many online literary magazines have popped up in recent years.

If you’re looking to treat yourself to great short fiction, the question isn’t where can you find it but where should you start? Reedsy recently dove into the world of literary magazines and from our directory of over 100 publications, I’ve picked ten of my favorites. Some of these magazines can be found on the shelves of large bookstores, some may require a subscription, and a few can be accessed freely online.

Perhaps the most prestigious, popular literary magazine in the world, The New Yorker is known more for its obtuse cartoons than possibly anything else. However, it is also a publisher of fine short fiction. If you were paying attention, you would have read the viral short story “Cat Person” from The New Yorker’s recent December issue.

For a taste, web visitors can check out a free story from each issue.

Initially co-founded in France by author George Plimpton, despite what the name suggests this quarterly journal is now based out of New York City. In the sixty-so years since its inception, it has championed a number of emerging writers like Philip Roth and Jeffrey Eugenides, whose early works were featured in its pages.

You can find copies at larger bookstores, but annual subscriptions can be purchased for under $50 online — which also includes access to its archive of short stories dating back to the 1950s.

If you enjoy reading short fiction, make sure you play your part in keeping this corner of the publishing world alive.

If you’re just in it for the short fiction, you might be disappointed by the fact that there’s usually only one entry in each issue. However, a subscription lets you read thousands of issues and stories. Since its inception in 1850, the list of contributors to Harper’s reads like a Who’s Who of American literature.

Perhaps the most honored literary rag after The New Yorker, the Emerson College-based publication has attracted a murderer’s row of talent over the years (David Foster Wallace, Annie Proulx, Joyce Carol Oates, and Haruki Murakami, to name a few). More often than not, their issues are guest edited by a well-known writer which, over the years, have included Raymond Carver and Seamus Heaney.

They’ve recently introduced Ploughshare Solos, which are one-off, digital-first publications of slightly longer stories and essays. If you want to know where the rising stars of literature are to be found, look no further.

Published four times a year, McSweeney’s Quarterly Concern not only pushes the envelope when it comes to humor writing, but also in publishing craft. Designed with great invention, no two issues look alike: if you’re the sort of person who loves their coffee table, then at the very least, McSweeney’s makes for a great table accessory. Plus, did we mention it’s really funny?

Also check out McSweeney’s Internet Tendencies: an online portal which features a unique bank of content separate from the magazines.

Another relatively young magazine (they’ve only been going since 1998), Tin House has quickly risen to become one of the most recognisable lit journals in America. Balancing works from established and emerging writers, they were founded as an antidote to the literary establishment, “for the many passionate readers who are not necessarily literary academics or publishing professionals.”

As a lovely bonus, you can can read many of their stories online for free.

This London-based magazine is a lovingly-produced piece of work published by a young team. Each issue is a beauty to behold, but if that’s not your thing, a lot of their content can be found on their site, including a fair chunk of web-only content.

Narrative doesn’t call itself a magazine. They prefer the term “online library,” which thankfully means that they let you read a lot of short stories for free. Some of the stories are new or recent prize-winners, but a lot of them are reprints of all-time classics from authors like Vonnegut and Saul Bellow.

Check out the free archive right here and, if you dig it, please donate.

Named after one of America’s great short-form authors, this magazine pays homage to the minimalist spirit of Raymond Carver by championing short fiction that is “both concise and generous.”

They run the annual Raymond Carver Short Story Contest, and as a part of their ongoing mission to promote the medium, all of the short fiction they’ve published since 2000 is available to read for free on their site.

Free is always great, but do support the cause and subscribe, won’t ya?

While almost everything above here has been curated by editors and are somewhat arch and literary, Wattpad is the polar opposite. It’s a platform that allows writers to publish and serialise their own works online. To get the most out of it, you will have to dig through a lot of stuff you don’t like before you find a real gem.

Wattpad readers are some of the most vocal fans out there, and have helped to launch the careers of people like Anna Todd, whose novel After has now sold millions of copies.

I know I’ve said it a few times, but many of these literary magazine rely on subscriptions and donations to keep on going. If you enjoy reading short fiction, make sure you play your part in keeping this corner of the publishing world alive.

These all places are really hard to find but I feel myself lucky to find them all under one article. So much great information is being shared which I think is perfect for a person like me because I am a researcher and to find such kind of content is my full time job. whatsapp funny video download I really like your services so will definitely consider you for my upcoming research projects.