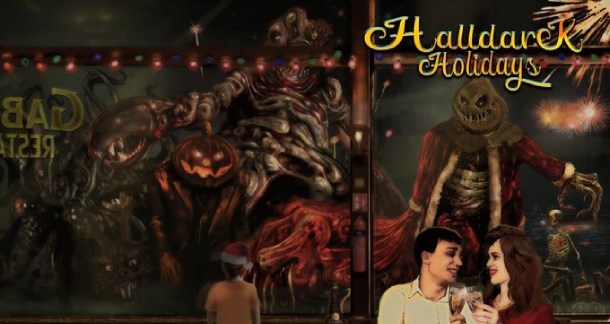 As the end of 2020 approached, I started thinking about how Hallmark movies are such a big deal. I mean, it's one of those things almost no one I know watches, but everyone knows they exist and exactly what they are. Their white, wealthy, romantic, suburban bliss bullshit aesthetic is part of American culture by now. The cute puppy and the snow and the good looking couple and the dad jokes and the fact that everything works out in the end is an awful mix of tropes, but every year we get a dozen more movies to add to the pile.

In any case, I wanted to ruin those movies. I wanted to ruin them with monsters. To be precise, I wanted to edit an anthology of stories that had the cutesy, romantic, perfect, Hallmark aesthetic and also monsters. So I tweeted about it. A bunch of writers told me they'd send in a story. That got me thinking about it seriously. Then Brian Keene said he'd write a story for it. Here's one thing you need to know about Keene: he doesn't fuck around when it comes to writing. If he says he can't do something, he really can't. If he says he will do something, he will. I decided to take him up on his offer. In the six hours that followed, I received four offers from publishers. Cemetery Gates Media won. They offered .05 cents per word, agreed to the ridiculously fast turnaround time I wanted, and they know the importance of layout, editing, and great covers. I put the call out. I gave writers two weeks. Hah. I wanted this thing out before Christmas. Writers did their thing. Once the submission period closed, I was facing 700 submission. Seven. Hundred. Fucking. Stories. A couple weeks later, Halldark Holidays came out. Here are ten things I learned while putting it together (some I already knew, but this is the perfect opportunity to talk about them).

Sending out an acceptance feels like you've won a prize. You're telling someone they created something awesome and you want to give them money for it

1. Writers will send you whatever they have

By the end of the first day (yes, the first day), I already had about 40 stories. Now, I was clear in the submission call: I wanted holiday stories (any holiday) that had the funny/cute/perfect couple/small town Hallmark movie aesthetic... and then everything gets ruined. Pretty specific, right? Well, some folks sent in crime stories. They sent stories that had nothing to do with a small town or monsters or horror or any holiday. Some were honest and said "I had this here and I'm sending it in in case it kinda fits..." Others weren't as honest and sent me stuff they couldn't place elsewhere. It's something some writers just do. Vampire antho? Here's a werewolf story. Noir anthology? My romance makes me sad, so I'm sending it. Your submission call is only open to LGBTQ+ writers? I think one of my cousins is bi, so here's a story.

You say max word count is 5k because that's what you and the publisher agreed on and you want more writers to get paid, right? Whatever, some folks will send you 15k word novelettes and 10k word stories and not even mention they went a little over the word count. In other cases, I would send out a rejection and they'd reply that they didn't think they were going to get in anyway because they hadn't read the submission call...

Two weeks. That's all I gave them. That got me 700 stories. Now, as a writer, I like more time, but I also like deadlines because they force me to stop thinking about writing and start writing. This anthology was a perfect example of how writers will get shit done if the idea appeals to them. Build your idea, and they will come.

I've edited a few anthologies before. I've edited magazines and special events. I love it. I love reading stories no one else has read and finding those gems you want to share with the world. It's a beautiful thing.

6. Personal rejections are the best thing

Listen, I know that some folks work as full-time editors and have a bunch of projects going on at the same time. I also get that, as a few folks have mentioned, there are some "big names" that don't like getting feedback if they get a rejection. Here's the thing: I read every story and I wrote a short, personalized rejection for every single one I didn't accept. The reaction was amazing. People posted about their rejections like they were good things. Some writers took the feedback, used it, and placed their stories elsewhere. I love that. Was it hard? You know it. Was it time consuming? You know I'm always honest, so I'll tell you this: at one point I was putting in 8-10 hours of reading/writing emails a day for this anthology...and hustling to keep up with everything else I have going on. That said, knowing that the personal response meant so much to some made me promise myself that's the only way I'm doing things from now on. Oh, and if you're a famous author and don't want feedback, don't submit to my anthology.

7. Writing rejections sucks and sending out acceptances feels like you've won something

Writing rejections sucks. I don't know if those who only edit feel the same way, but I'm a writer first and foremost, so I know how rejection can sting when you've worked hard on something. On the other hand, sending out an acceptance feels like you've won a prize. You're telling someone they created something awesome and you want to give them money for it. Acceptances are everything that's great about publishing in one simple email. 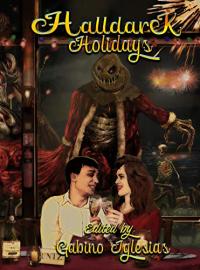 Here's the thing: I had to send rejections to big names, writers whose work I've read and love, writers with books with Big Four publishers, and bestselling writers. In the back of my head, a little voice was saying, "Adding this name would be awesome" or sometimes "This name in the TOC will help sell more copies, you idiot," but I didn't give in. On the other hand, I published, for example, a young writer named Magnolia Strock. She's in high school and this was her first publication, but the story was a perfect fit. Yeah, staying true to your vision often means doing something that the little voices tell you isn't the best move, but that you know is the right move, the one that aligns with what you really want to accomplish.

9. Diversity is a naturally occurring phenomenon

I've heard all the excuses editors give when they put out an anthology that's whiter that the slopes at a skiing resort in the middle of winter. "I only picked the best stories," they say. "Diversity is not my job," they claim. "I only care about quality," they explain. Ah, fuck all of you. I got 700 stories. Of course not all of them were by straight white dudes. I picked the best ones. That means straight white dudes...and straight white women, and women of color, and members of the LGBTQ+ community. There's no way in hell you could get 700 stories and all the best ones would come from a single demographic. I picked the best of the best (yeah, there were a LOT of great stories, and that's why I had to create a second anthology that will come out this year, but that's another essay), and that meant diversity and different approaches, voices, and points of view. Diversity happens naturally because the world is diverse. If everything an editor has done lacks diversity, I assure you they've worked to make it so. Again, fuck their excuses.

10. Putting a great anthology together in a month is totally doable

I know it's crazy and it's a ton of work, but you can take an idea, inject it with a lot of energy, and make it happen. If I can put an anthology together so quickly, so can you. Hell, Nick Kolakowski and Steve Weddle did it with Lockdown. I hope you do it, and I hope you get writers paid in the process. Going from idea to finding a publisher to submission call in a day was awesome. Seeing a cool cover a few days later (shoutout to Toe Keen!) and watching the stories come in just added to the experience. I have to work on my own writing, but I will do crazy stuff like this from time to time. Why? Because it's fun, because I love getting writers paid, because sharing great stories with readers is a superb feeling, and because turning an idea into a thing people can read is awesome. Now I'll go work on the next one. Oh, and I refuse to publish my own work in an anthology I'm editing, so please invite me to yours or let me know what y'all are submitting to. No back to hustling.

Get Halldark Holidays at Bookshop or Amazon