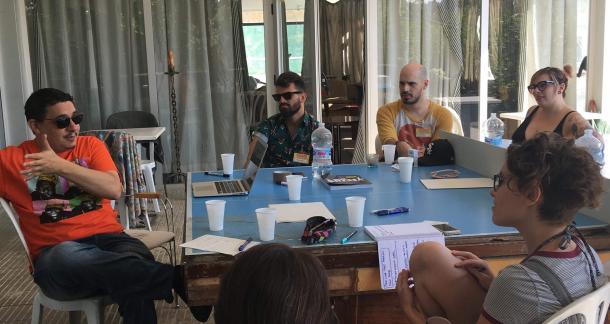 There was a time when I thought I would never teach a writing class. It was about 7 years ago, and I had just finished my MA in creative writing. I was nowhere near close to having my manuscript ready for publication and feared I'd gotten a useless degree. I told myself that if I wasn't able to get my own work published I wouldn't be able to help anyone else with theirs.

But learning to write isn’t just sitting in a classroom or joining an online group; sometimes it can be hanging out at a diner with another writer.

Though it looked like my writing goals might never be achieved, I lucked out in getting a well-paying job that helped me move to NYC. I kept writing without much luck, but things changed when I saw a guy sitting at a counter going over notes for a script—Right away I knew I needed to talk to him. The guy ended up being writer and documentary filmmaker, Stephen Mitchell. We hit it off and started meeting at the Odessa Diner in the East Village on Saturday’s to talk storytelling craft.

Through all this, I stopped thinking about teaching. But when I signed up for a literary conference in Barcelona, I got excited about the idea again. The biggest reason why I agreed to run a class in Barcelona was because I felt like I had something to teach. It had been 7 years since that first meeting in Odessa, and I was ready to give something back to the writing world.

When I arrived at the con, I was a little nervous about the class. Not only was it my first time teaching, but English was everyone’s second language. But once the class started, the cliché of clichés held true—storytelling is a universal language. The class had writers of all levels and I shared with them how to build a book from the ground up. 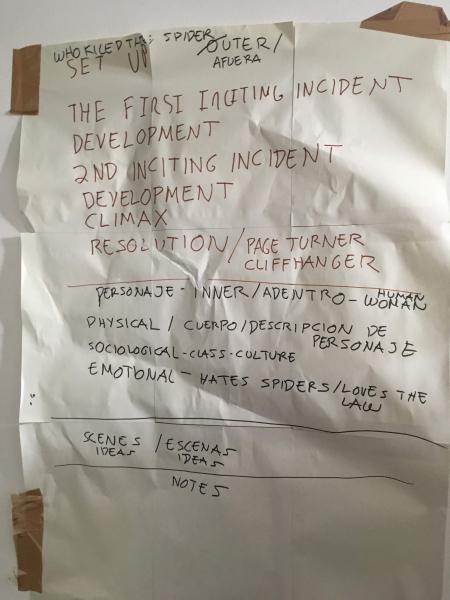 All the craft books I nerded out on with Stephen came into play, and I mixed that knowledge with my own writing and editing experiences. I shared how to outline, why character is and always will be more important than plot, and how to make your inner and outer stories compliment each other—resulting in fun and fulfilling fiction for both reader and writer.

The authors were having a great time. I was really enjoying myself as well, because I felt like I knew what I was talking about. I think in some way I was reticent to teach because I wanted to make sure what I said had value to a new writer. It was as gratifying to see them absorb storytelling craft as it is sending an edited final draft back to a more experienced writer.

After we went over character development, how to plot and outline a book, and making changes that focus on the mixture of the two, we put everything into practice. As a class, we outlined a book and came up with the main characters. I worried a little that a group of writers trying to collaborate on a single outline would be a disaster. My goal was to duplicate the experience of a writer working out different story options in their head, i.e.: the creative process exteriorized.

Now I am back home, playing catch up on editing and my own writing. I am staying in contact with the students and friends I made in Barcelona. It feels great getting back into the groove of editing and writing, but I am missing the experience of teaching a class. While it would be difficult to conduct a class where I live, in rural New Hampshire, I feel what I did would be easy to recreate online. So who knows, if I’m lucky, maybe I’ll get to teach a LitReactor class one of these days.

The tuitions of the girls are playing the important role in delivering the education. They revenue their part in the encouraging of the best essay writing services reviews and do so copious hard work for the recovering studies of the children as well as they help to the mothers who are not able to learn their kid.

I am really impressed by your teaching style. It is so simple yet easy to understand by any student. Through your guidance I can able to write articles to https://www.nerdywriters.co.uk/custom-essay/ blogs after going through your class. I am extremely happy to inform this.

Teaching is a very interesting subject because you get to meet the students with different minds, you are dealing with a lot of thinking process at the same time you are teaching them what they do not want to get, but the Dissertation writing service UK can make it more easy for them, you can just visit and check the new discounted offers on their site.

Another element that is vital to online teaching is the use of visuals to visually display the lessons, instructions, or content. Online learning is about visualizing a product or solution - https://www.labroots.com/trending/health-and-medicine/18914/improve-online-teaching-pandemic , and using this to teach your students can make the entire classroom experience much more engaging. The use of colorful pictures, animations, video clips, and diagrams can provide a much better way to teach and engage than text-based lessons ever could. If you are using eBooks and other online resources, be sure that they are properly formatted and provide clear and effective directions and instruction. The graphics and images on the Internet can be an effective and inexpensive way to improve your classroom, especially if used effectively and creatively.

i am in love with this game_  friday night funkin