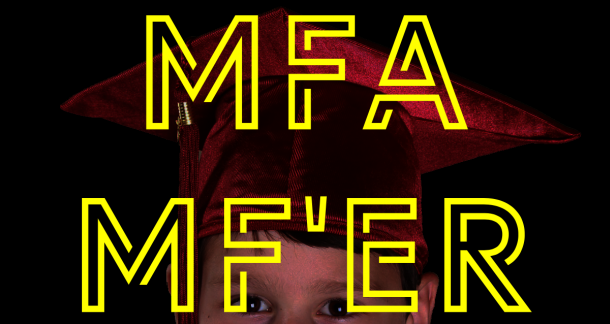 I wanted to do it. This was like, shit, 15 years ago. I’d finished my bachelor’s, took a year to work and not be in school. During this time, I was working in a library, a job that was more than tolerable after a few years spread across a phone center, Wal-Mart, making pizzas, etc. So, the plan was to apply to some MFA programs, see if I got in, and if I didn’t, I’d apply to the less-choosy world of library schools, get a library science degree, and then get a big boy job.

I’m employed at the library today. You can fill in the rest.

Still, every so often I get the bug. I think about applying to MFA programs again.

And I talk myself out of it.

By now I’ve gotten pretty good at my yearly, “Fuck that shit” talk, as I’ve delicately dubbed it. So good that I pitched it as a TED talk. It turns out that TED talks are usually motivational, not de-motivational. But I figure it might benefit some of you who are also trying to talk yourselves out of another round of MFA applications.

Get Together A Packet of Garbage

Colleges want a bunch of extra documents that nobody needs. Letters of recommendation? In a paper envelope? Can’t you just give my friends a quick phone call, like any other job? Transcripts? Do you really care that I got a B in biology? Statement of purpose? Do you really need me to cradle your balls for a few pages, telling you how enriched I’ll be as a human?

When will these programs get their act together and figure out that nobody cares about this garbage? 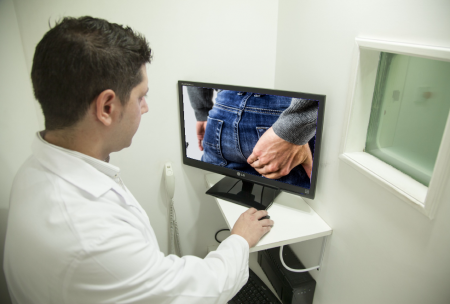 Some programs require a GRE test. That’s the Graduate Rectal Exam. Just kidding. I’ve had more than one rectal exam, and they’re a much better time. Plus, no studying.

The GRE is like the SAT, but with different letters. That’s the only difference as far as I can tell.

You buy a study book for like a hundred bucks, then you pay to sit in front of a computer in a terrible strip mall and take the test, then you wait about 17 years to get the results, and then you turn in your scores with no real concept of why an MFA in creative writing made you take a math test.

You’re constantly, CONSTANTLY told not to pay to enter contests for the chance at publication. Constantly. And yet, nobody bats an eye at paying to apply to an MFA program.

Before we talk free college, maybe we should talk about where we can cut some of the costs. Vanderbilt’s application fee is $95! To apply! Wyoming is a “reasonable” $50. I’ve paid some contest fees in my day, but nothing even remotely like $50.

In 2017, the estimated number of MFA applicants was 20,000. Which comes out to an even million bucks in application fees! How have we been so tricked? Broke-ass students, no, broke-ass POTENTIAL students, pumped a million bucks into the MFA system, and 98% of them got nothing in return.

If I could make a request, I’d like to ask that when I get rejected from these programs, I get part of my application fee back. At least toss a fiver in the envelope so I can buy a beer. Ya’ll can settle for $900,000 next year, right?

The idea behind student loans is that you use them to get an education, then you use that education to get a job and pay off those loans. The problem is, I don’t know if anyone told the schools or banks that an MFA program isn’t really a career-oriented endeavor.

I did the student debt thing once and payed it off over a long, painful decade. Not looking to jump on that ride again.

Plenty of Heroes Without

When I look at my favorite authors, there’s a mix.

Tom Spanbauer has one. Chuck Palahniuk doesn’t. Stephen King says you don’t need one, and that’s certainly true for him.

Let’s not belabor this one: You don’t NEED an MFA to write, to be a good writer, and/or to be successful. Plenty of people have proven that. We could stack up names on both sides of the fence all day. It’s pointless. My takeaway? It’s not a necessity.

MFA programs provide writers a lot of time to write, an environment that encourages writing, and some instant feedback jammed into a couple years. Maybe it’s like human growth hormone for your writing. But I’m natural, baby, and I tend to think that strength built naturally is longer lasting, more useful in the real world, and more resilient.

I really do think doing the same amount of writing in 5 years instead of 2 brings a different value to it.

You’re Not a Kid

I’m sliding into that “nontraditional student” status. Which is the nice way for colleges to deal with students like me who are so out of it we don’t realize you can’t smoke in class anymore.

I don’t think I’d be uncomfortable because of my age, but I do think age has changed my preferences in fiction, taught me some things about writing, and has left me a low amount of patience when it comes to fellow students experimenting. Style over substance isn’t going to be interesting to me anymore. Someone not having their pages ready for class would piss me off today in a way it wouldn’t when I was younger.

This isn’t an old man complaining about young whippersnappers. It’s an old man recognizing that maybe he shouldn’t throw himself into a situation that’s designed with younger, less experienced writers in mind. I've had my experiences, and they need a chance to have them, too. I'd just prefer they do it with each other. Not me.

Getting up at 6 am to put in a solid writing hour for the next 2 years would probably give me a near-equivalent number of writing hours that I’d get in an MFA program. Not to mention I’d learn to build a writing habit on my own. I might learn certain things from an MFA, but by NOT going, I'll learn how to do the long run stuff on my own.

Can Writing Be Taught?

Yes, it can. Anyone who says it can’t is probably a crappy teacher, a student who refuses to listen, or a writer who is so precious about what they do that they fear the hard-working writers of the world will expose that anyone with enough time, energy, and drive can do what they do.

I also tend to think that while writing can be taught, it’s like sports. Some people are gifted, some people get good with hard work, and most of us are a combo of some kind.

I think I’m somewhere in the middle. Some talent, some really great coaching.

And it’s middle-of-the-road-ers who probably benefit least from an MFA.

The talented ones? They benefit from someone holding their nose to the grindstone, not so much from the specific lessons.

The hard workers? They benefit from the lessons learned, which they can apply with their work ethic.

The middlers? We get something out of it, but it’s less clear, and it’s less measurable.

I think it can be tremendously refreshing if a creator of literature has something on his mind other than the history of literature so far. Literature should not disappear up its own asshole, so to speak.

Wouldn’t it be a better use of my time and money to learn something else? With that amount of work, I could become...I don’t know, an accountant? And work a steady 9-5 with benefits, which would allow me plenty of time to write? Or I could learn to code, and with that I could work from home, probably fewer hours per week, and again, write more?

And wouldn’t learning something besides writing give me more things to write about? Might I have more interesting stories that come out of exercise science or vet school?

Is creative writing the worst thing I could study?

One thing about getting an MFA is that you’ll end up with a solid network. We’ve all seen how this works. One writer publishes a thing, helps another writer out. A writer puts together an anthology that’s a mixture of great writers and friends (sometimes these are the same people, sometimes not). A writer gets a book published, and they help put a friend’s manuscript in front of publishers.

I hate networking. I suck at it. And while I’ve made some good friends through workshops, I think the whole networking thing is kinda gross. To put it another way, being a writer is something I want to do precisely because networking doesn't have to be part of the equation. I recognize that it’d help me a lot, but I’m willing to sacrifice some traditional success. Because to me, success looks like not having to network.

Any MFA MF'ers out there willing to prove me wrong?

The Problems and Virtues of a University Creative Writing Education

Interesting article, I like your opinion regarding the writing. That anyone can learn to write is a fact. It’s just easier for someone, but harder for other. Of course, some very talented people write really especially, but the rest will be able to achieve good results with their work. I'm working on improving my writing skills and already have positive changes. I used essay help service all the time before, but now I can cope with many tasks on my own.