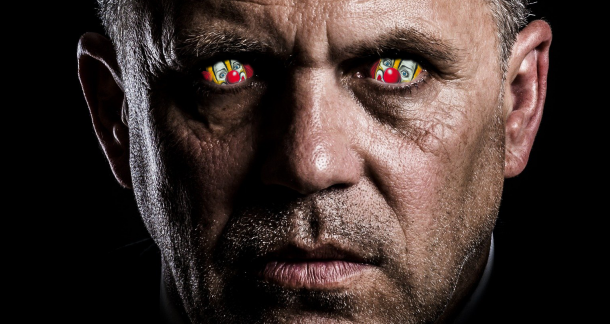 Here’s the best advice I’ve ever received from someone who starred in Robocop 3:

Take what you do seriously, but don’t take yourself seriously.

These are the wise words of Jeff Garlin, who you might know from Curb Your Enthusiasm or The Goldbergs or from his role as “Donut Jerk” in Robocop 3 (Garlin's description of the movie's place in the trilogy: “Y’know, the good one.”).

Why am I bringing this up here?

Because writers could really use a better understanding of the difference between taking what you do seriously and taking yourself seriously. Might be a big quality of life improvement for some of us. And it's a DEFINITE quality of work improvement.

Let me show you what I mean.

Roxane Gay writes pretty serious books. She reviewed her own book, Bad Feminist, on Goodreads, like this:

This writer certainly has a LOT OF OPINIONS. I mean…

She reviewed An Untamed State on Goodreads, too:

Gay writes serious shit, she works hard, she writes A LOT. She takes what she does seriously. And obviously doesn’t take herself too seriously.

People treat Roxane Gay respectfully, and they take her work seriously. That’s the point. The work determines how other people treat her, not her level of self-seriousness.

It’s working for her. It can work for you, too.

Self-seriousness is a tool mediocre writers reach for too fast and too often. If you failed to take your work seriously and cranked out a mediocre story, why not just take yourself seriously instead? Maybe some of that seriousness will transfer to the story, right?

Go ahead! We have many great personas to choose from:

If you find yourself reaching for a serious persona to bump up the seriousness of your latest book, I get it, we all screw up. But maybe next time put that effort into the work instead. Please? Your uber-serious tweets are making me eyeroll so hard and so often that it's starting to be an opthalmological concern.

Keep giving me new reasons to read your stuff.

Don’t write for your ego. Don’t write to reinforce your own seriousness.

Be an amateur sometimes. Try something new. Keep growing. Keep giving me new reasons to read your stuff. If you don’t take yourself too seriously, you’ve got nothing to lose.

Taking yourself seriously feels like control, but it’s not.

The closest thing you have to control is writing an undeniable book. Focus on that.

Hey, take yourself as seriously as you want. You do you.

Me? I’m a goofy bastard. There’s no denying it. I walk funny, I giggle when I’m delighted. I’m just not cool, and if I took myself seriously, I’d be the first and last person to do so.

My plan? Write stuff so good, so undeniable, that even my goofball self can’t wreck it for readers. I’m not there yet, I wouldn’t say the one about the ghost detective who fights a blob hit the mark, and the one about the heist that involved precision defecation wasn’t quite there, either. There’s a lot to overcome here.

I’ll get there. And I’m having fun along the way.

I’m not going to yell at any authors to smile in their author photos. I won’t print up whoopee cushions with your overly serious quotes on them (although now that I’ve thought of it, it’s very tempting). If the very suggestion that you take yourself less seriously made you furious, don’t worry, I’m not talking to you. You’re already too far gone.

But if you want to join me, me and the clown brigade welcome you with open arms (with a bunch of scarves and shit shoved up the sleeves, but still, open). Um, and apologies to those of you who are afraid of clowns. That and the pictures probably makes my invitation sound like a threat. It's not. Probably.

Get My Footprint: Carrying the Weight of the World by Jeff Garlin at Amazon

Get Robocop: The Definitive History by Calum Waddell at Bookshop or Amazon

Thanks for sharing, Peter!
I really liked your point of view that when writers take themselves too seriously, they stop growing... I've never thought about it before. I work as a freelance writer at https://assignmentbro.com/ca/homework-help website and I must be serious as I work mostly with academic papers... Your post inspired me to try new ways and be more creative! Thanks!