Taking Creative Control: How to Make Time for Writing in a Busy Schedule 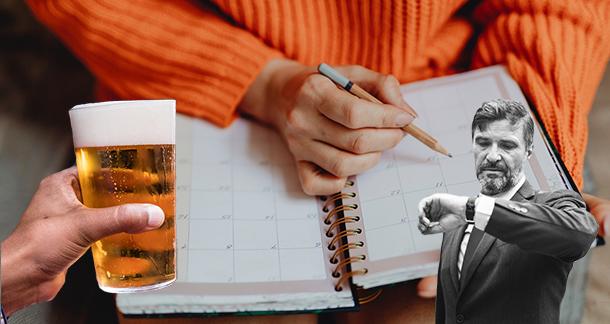 Between time getting ready for work, commute time, and time at work itself, I spend close to 58 hours every week in some way dedicating myself to my job.

Which is great! I’m paid to do it and because of that, I can pay for things like, you know, rent. And groceries. The electricity bill. Even eating out with friends when I feel like it.

But speaking of eating out with friends: I, as an extrovert with an intense need to be social who also, by happenstance, works the graveyard shift in a pretty non-social job, make it a priority to spend as much time as possible every week with friends.

All of these are good things! Socializing, working, paying the bills — sure, it’d be nice if there was a world where I never had to do anything I didn’t want to and still got paid for it, but that’s not the reality we live in. But when it comes to reality, it’s not a bad deal I’ve got.

But there’s one last thing I try to add to my weekly schedule of busyness: writing.

I write essays; I write blog posts (which can be as simple as ruminations on my mental health or as in-depth as author features or reflections on books I’ve read); I write novels; I write poems.

Find somewhere that you dedicate to writing, and which you tell: “You belong to writing. And nothing else.”

There are a few tools I’ve picked up lately, a few time management skills I’ve developed and mental habits I’ve managed to slip into that have made it worlds easier to get writing down — and when I say writing, I of course mean not just the act of typing words onto a page, but of reading books, magazines, online articles, of critiquing my fellow writers’ work, and of spending time in creative thought and in spaces that rejuvenate me and remind me: Yes, I am a writer. I can do this.

The first thing I did, which I’ll say to get out of the way because it isn’t an option for everyone and in fact, wouldn’t have been an option for me earlier than about two months ago, is I found a co-working space. I, personally, am a member of Paragraph NY, which is geared specifically and solely towards writers, and there are myriad spaces available.

And if you can’t or don’t want to commit to one space, there is an app called Croissant, which allows you to choose a monthly option and gives you an allotment of hours based on that option, and from there you can go wherever has spots available on the day you need it.

If that’s not something you’re interested in, one piece of advice is this: carve out a space for writing. It can even be your kitchen table, or a corner of the couch if you don’t have a table (I didn’t, for a long time), or, on sunny days, a table or bench in a park, or at the local library if you have one, or — really, just find somewhere that you dedicate to writing, and which you tell: “You belong to writing. And nothing else.”

And by all means possible, don’t let other worries crowd your writing space. When you’re there, you are Writer first. Emergencies can happen, but as much as possible, try not to worry about the day job, about relationship problems, about anything but what it will take to improve your writing.

Something else that has been invaluable is community and accountability. I had several friends who wrote, who kept me accountable (mostly by screaming FINISH YOUR BOOK or WRITE THAT ESSAY at me until I buckled down and did the thing), but it wasn’t until I joined a community and forged one of my own that things have started to change.

The 88 Cups of Tea community has been incredibly amazing for me. If you don’t know what that is, Yin Chang is the host of a podcast where she interviews storytellers (predominantly YA authors, but others as well) about, well…their process; their lives; how they find hope in the middle of darkness.

I was introduced to it through her episode with V.E. Schwab, and have been listening for almost three years now. And the community Yin has formed around it has been encouraging, fun, and inspirational in a million ways.

It’s because of that group that I created my own writing group, finding a group of about 7-8 other women in New York who write in my age category and wanted to get together every week and write with each other. We’re just getting started, but I’m already feeling fired up and ready to go.

Another thing I love, that has helped me a lot? Lists.

I have two days off per week, and because of my overnight schedule, it basically means that between 10 pm (or, depending on my friends’ availability, sometimes 2 am) and 8 am, I can dedicate myself entirely to my creative pursuits. And really, unless I want to nap or watch TV, there’s…not much else I’m interested in.

So I use the Notes app on my phone and computer, and I list out all the things I need to get done, and then I allot myself 30-45 minutes per task. 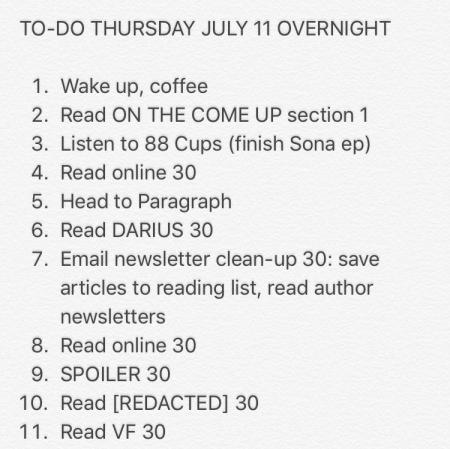 I like to keep all my old lists so I can scroll through and look at what I’ve accomplished. It makes me feel good and productive, and on the days when I don’t cross out a lot? I give myself grace.

Which is another thing I’ve had to learn (the hard way): you can plot and plan and have lists and dedicated spaces and groups, but eventually, you’re going to fail.

And I’m not talking the rejection “your book/essay/poem/idea wasn’t quite right for me, keep trying” kind of failure.

I’m talking the “I didn’t even write the book/essay/poem/idea because I was tired and there were bills and the dog got sick and the landlord won’t turn the gas back on and my boss is putting the pressure on and — and — and —“ kind.

There’s something to be said for how it’s not failure after all, but it feels like failure to plan to write and not do so.

And I just want to say: that’s okay, too. It happens. Life happens. No one can write all the time, first of all because I think you’d run out of steam exceedingly fast, but also because everyone has responsibilities.

And sometimes…sometimes just taking a break and getting a drink with friends is the creative refresh you need.

My Resolution to Write Less

Thank you for the words of wisdom. At this point being so new to writing I think anything gives me the help I am looking for. I have a lot of ideas, I have a lot of fresh stories as I am new but having some sort of time to put the puzzle pieces together can be a challenge. Also being new I am not quite sure what methods work best for me. I appreciate you giving us a little bit of your time to help us fellow writers.

I like writing and think that it is an amazing way to get distracted from work. It is totally worth the time in your schedule. I always find time for this inspirational process. However, I am not good at grammar, so I always turn to https://edubirdie.com/proofreading-services resource for the help with proofreading. The professional Edubirdie experts do an amazing work all polish all my writings. I am sure that writing a unique paper shows real creativity and talent.