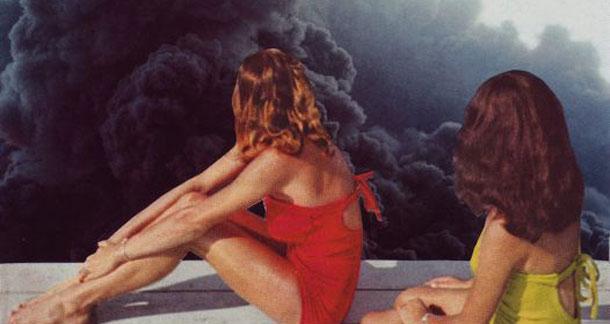 I am crap at a lot of things. Figure skating, remembering birthdays, anything to do with machinery, reading maps, and failing to make eye contact with drunks are just a few items on the long list of activities at which I spectacularly fail. But if I had to single out one thing at which I am especially crap, it would be choosing which book to take on holiday.

I first realized my weakness in this area when I spent two weeks on an island near Stockholm with nothing but the stories of H P Lovecraft for company. By day three of my trip, my nighttime visits to the traditional Swedish ‘utedo’ became stumbling journeys of sheer terror during which I fully expected Cthulhu and all his minions to appear from behind the nearest pine tree and snatch me away to another dimension. But I didn't learn. A trip to Florence two years ago was not improved by taking Philip Henchman’s A Northern Clemency along with me. Reading about Yorkshire during the miner’s strike in between visits to the Uffizi was like trying to eat a gelato with a side helping of black pudding. But my worst ever reading/vacation combination has to be grabbing a copy of Atlas Shrugged from the airport bookstore last year. Our destination? Disneyworld in Orlando. The contrast between days full of singing teapots and articulate clownfish and evenings filled with Rand’s crackpot vision of a world where people like Donald Trump actually matter put me in that delicate state of mind where I was ready to launch myself at the nearest person in a mouse suit and attempt to strangle them with their own tail.

Which is why I know that selecting the right reading material for your holiday can’t be left to chance. You have to match the book to the holiday. Like this:

My nighttime visits to the traditional Swedish ‘utedo’ became stumbling journeys of sheer terror during which I fully expected Cthulhu and all his minions to appear from behind the nearest pine tree and snatch me away to another dimension.

Once the preserve of 20-somethings anxious to experience Life before they turned 30 and became too old to enjoy themselves, backpacking is now a popular vacation option across the age spectrum.  But which book should you tuck into your rucksack before you head off to tramp the Pyrenees or wander the hand craft stalls of Goa in search of the ultimate pair of flip flops?

In the summer of 1936 the 19 year old Laurie Lee packed his violin in a blanket and left the tiny Gloucestershire village of Slad on foot, bound for London, one hundred miles away, and once he arrived, he just kept going. Lee caught a boat for Vigo in Spain and spent a year walking a country which was desperately poor, ripe with tension, and on the cusp of revolution. He recorded the journey in As I Walked Out One Midsummer Morning in which he captures the terror, the exhilaration and the physical hardships of life on the road. But for the ultimate story of voyage, the book to take with you when wanderlust strikes is The Odyssey, the epic story of Odysseus’ seven year attempt to return home after the Trojan War. This is the ur-legend, the one upon which all others draw. Characters so potent - Sirens, Cyclops, Mentor – that their names have entered into our vocabulary all originated here.

If instead of paella and bullfights, mention of Spain conjures up lightsticks, mood-altering pharmaceuticals and the anthems of David Guetta, then come holiday time you may well be heading for Magaluf, Ibiza or Ayia Napa for a fortnight of getting off your face and (hopefully) out of your kit. Reading might not be top of your entertainment schedule, but when finding the other leg of your trousers presents your shriveled brain cells with an insuperable mental challenge and the thought of being chatted up by yet another German in search of the ideal flogging partner starts to pale, then you might want eschew the clubs in favor of spending a quiet night in with a book.

The wise clubber will make sure to have packed literature which is absorbing but not too demanding and the author of choice here has to be Robert B Parker, whose stripped down yet elegant prose has spawned a thousand inferior imitations. Each of his Spenser mysteries can be consumed in an evening or two, and as Parker wrote forty novels featuring the private detective, you have plenty to choose from. If a Bostonian PI sounds too masculine, Sara Paretsky’s V I Warschawski series does pretty much the same job, in similar zingy, gritty style. Or if you can stomach the thought of a cautionary tale when you’re not so much visiting Sodom and Gomorrah as lying face down in its sweaty lap, Irvine Welsh’s seminal junky story Trainspotting might be the right book with which to while away the hours between drinking sessions.

Not everyone has the desire for round the clock partying, or, let’s be honest, the ox-like constitution required to make it fun. Those travelers who prefer to spend their annual leave sating their minds instead of their libido require a complementary type of literature. Once you’ve returned to your boutique hotel, feet gently throbbing after a day spent absorbing the glories of ancient cultures, what kind of literary digestif would restore you for the next day’s schedule of museums and art galleries?

If you’re up for a challenge, you could crack open Louis Aragon’s surrealist masterpiece Paris Peasant , a swirling prose version of the ultimate city of culture, or Berlin Alexanderplatz,by Alfred Döblen, a Joycean stream of consciousness about the tribulations of a recently released prisoner in 1920’s Berlin. Those travelers who prefer something lighter (for which read: comprehensible) might prefer A Room With a View, E M Forster’s chaste exploration of true love, set against a backdrop of Florence and Rome, while William Boyd’s Waiting for Sunrise is a sly, witty take on the spy story set in the psychoanalytic milieu of pre-war Vienna.

Books for getting away from it all

Remoteness is another way to recharge your batteries. You don’t have to be a hermit to appreciate the benefits of isolation, especially if you’re looking at two weeks of Solitude and not (with apologies to Gabriel Garcia Marquez) a Hundred Years of it. Birds wheeling in empty skies. Rolling sheets of sea. A boulder for company. Reading is an integral part of that kind of vacation and that’s why choosing carefully is even more important than usual.

Don’t pick Lovecraft. Unless you want to see Cthulhu (may his name be forever sacred) hidden behind every rock. Keep the mood right with Jane Smiley’s classic The Greenlanders, an epic rendition of the doomed fourteenth century attempt by Norway to settle the outer edge of the world. The Atlas of Remote Islands by Judith Schalansky doesn’t so much deal with isolation as sail away into it, eyes fixed on the horizon. Schalansky grew up in landlocked East Germany, locked behind the iron curtain, where the closest she got to travel was leafing through the pages of the family atlas. A graphic artist, this book which she illustrated herself, is a hymn to all those distant parts of the world she has never visited and (according to the subtitle) never will. Reading it will make the loneliest place seem comfortingly populous.

Books for the Traditional Beach Holiday

This is where most of us are going to end up come vacation time. On a lounger, slowly turning the same shade as a well boiled shrimp and wondering how the Germans get all the shady spots. In between regretting last night’s ingestion of the local specialty which was advertised as beef, but which you are now pretty sure was horse, and rescuing your kids from the hotel entertainer, who shows every sign of plotting to sell his charges to the nearest band of gypsies, you’re bound to need the sanity-saving properties of a good book.

In keeping with the observation that Hell is other people, beach holidays require reading matter which acknowledges that other people are not just Hell, but Hell with bells on. Relieve your feelings about the crassness of the rest of the human race by diving into H E Bates’ series about the sublimely awful Larkin family. The Darling Buds of May is the first and probably the finest of the bunch. The Commitments and The Barrytown Trilogy by Roddy Doyle does for Dublin what Bates did for England and Money by Martin Amis unleashes the brash and unbearable John Self on a hapless Manhattan. If reading about Self’s attempts to land a film deal by spinning his life story to a producer while at the same time sousing himself with booze and mistreating everyone else he brushes shoulders with doesn’t make you feel better about the Russians who keep pushing in front of you in the queue for lunch or the teenagers who act like living proof that humans can successfully be raised by orangutans, then nothing will.

This summer three generations of Murphy will be heading for a villa in Provence, followed by a few days in Paris. It's the full immersion French experience and this year I'm prepared, with copies of Pagnol's L'Eau des Collines and Victor Hugo's classic Les Misérables both on order (along with the fervent secret hope that reading them both in French will turn me into Emmanuelle Béart). And having shared my holiday reading disasters, I want to know what worked for you, or didn't. What were your most memorable holiday reads?

Writers, Get Those Summer Vibes

I read Lolita on a beach in Jamaica while the people next to me read Stephen King and Stephanie Plum novels.

I felt so highbrow.

I carry a copy of Jaws with me when I go to the beach.  I just leave it open on the sand near me and watch people walk by and then not go near the water.  Their day at the beach, ruined.

Just kidding.  I can't go near sunlight.  I burst into flames.

I liked everything about this article except how Dave Guetta was your reference to the club scene...shudder.