In one of my classes last night we were discussing a few stories out of The Best Horror of the Year anthology—one was zombies and the other was vampires. And one of the things that made those stories really pop and stand out to me, as well as the class, was the way that the authors worked to make these stories unique, personal, and compelling in the face of SO MANY zombie and vampire stories over the years. How did they do that? They applied their own personal touches to the stories, and made them their own. That’s what we are going to talk about today—what makes your stories uniquely you. (The stories were “Cleaver, Meat, and Block” by Maria Haskins, and “A Hotel in Germany” by Catriona Ward, FYI.)

So yes, there have been hundreds, maybe thousands, of stories written about vampires, zombies, werewolves, haunted houses, demons, etc. One thing that makes your stories uniquely you is how you tell that story—your style. Think about what you do best, think about what your peers respond to in workshops, what your public thinks when they read your work. If you read one of my stories, you probably know that you are going to get a few things. You know that I’m a maximalist, so my stories tend to be dense, heavy setting, lots of sensory details, visceral, and immersive. You know that I may write a horror story, but I don’t use traditional tropes. There is often an unreliable narrator, and surreal moments that may make you question the reality of the story. And sometimes my formatting and structure may be different—choruses, a hard shift in POV, epistolary tales, and other oddities. Red Moon by Benjanmin Percy is not the same as Mongrels by Stephen Graham Jones, but I loved them both. Figure out who you are as an author, and then make sure that your style is fully embraced.

If we are just talking about horror, that one genre alone might contain a range of sub-genres—quiet, splatterpunk, gothic, supernatural, Lovecraftian, psychological, cosmic, classic, you name it. So, if you are only writing in one genre, figure out if you are going to focus on one sub-genre as well, or address several different sets of expectations. There are rules to horror, and so of course there are rules to each sub-genre as well. If you write hybrid fiction, try to figure out what your combination is, and then lean into it. I often call my writing neo-noir, speculative fiction with a literary bent. I write fantasy, SF, horror, magical realism, thrillers, transgressive, neo-noir, new-weird, and literary fiction. So my unique combination is what I do. There is a unique combination that works for you as well.

Another aspect of your fiction is the life you have lived leading up to that next story. If you spent 25 years in advertising, or 10 years on the police force, or 5 years as a mortician—all of that can go into your writing. All of your past relationships—good and bad—inform your writing and dictate how you feel about so many issues. Your jobs, your education, your family life, your education, where you have lived, your orientation, your culture, your city, your religion. All of that goes into your work. So take a moment for self-evaluation and see what you have done, who you are, and how that might make your stories different.

Similar to your history, is your authority. Now, the difference here is that just because you saw something weird in the sky out in a cornfield one LSD-induced evening, it doesn't make you an astronomer. What do you consider yourself an expert on, what have done for a long time, what is important to you, and what do you do now? I don’t really think of myself as an expert in much of anything, but here are a few things I have used to my benefit. Living in Chicago, the winters here are pretty rough. So when I wrote my recent arctic horror, sin-eater novel, Incarnate, that cold, the snow, the ice, the temperatures—I could relate and speak to all of those things. It came up in my novel Disintegration, as well. Living in Chicago for 24 years, I know the city and suburbs pretty well. So I was able to set multiple stories in different parts of the city. I dated quite a few women in my time, so I have been able to tap into my experience with them—emotions, sex, success, failure, drugs, pain, enlightenment, peace—you name it. I spent 25 years in advertising, so I’ve been able to weave that world into a few stories here and there. I’m not a chef, but I love cooking, so with the intense meals that were part of the sin-eater rituals in Incarnate, I was able to tap into my love of food, and knowledge, to show these dishes (which I have cooked many times) in great detail. Think about what you can use in your writing.

Think about where you live in the world, and what that means to you. Think about your city, your community, your daily life, the way that country or location works, as well as religion, politics, and work. If I were to assign a vampire or zombie story to a class of mine, if they lived in Poland, China, Australia, New York, Moscow, or Sweden—I’d expect those to be vastly different stories. Think about the difference between Let the Right One In and A Girl Walks Home Alone at Night and The Girl With All the Gifts and Dracula and Nosferatu. One of the things I love about the Akashic noir series is that while they did tap into quite a few cities that are classically noir—New York, San Francisco, Chicago, Los Angeles—they also have included quite a few places that I didn’t think could be noir, but definitely were. Whether it was a rural location, someplace remote, or the seedy underbelly of a large city, why not set your noir anthology in Baltimore, Berlin, Cape Cod, Haiti, Prague, Rio, or Venice?

The last thing I want to mention is your perspective, your POV. What you have to say is important to your work as well. Are you working hard to fight against misogyny in fiction, creating empowered female characters that are independent, smart, layered, and unique? I totally want to see that. Whether it’s Priya Sharma and “Fabulous Beasts” or Kelly Robson and “A Human Stain” or the Gretchen Lowell female serial killer series by Chelsea Cain—those are powerful narratives. Do you want to write eco-horror or cli-fi, tapping into issues with the environment that matter to you? Are you an author of color who is looking to show the range of depth and emotion in characters that are usually pushed to the side—secondary, or minority elements? Are you weaving in politics or trans rights or some other element into your fiction? One thing I’ve done lately is work on putting more hope into my dark fiction, to show that there is a light at the end of the tunnel—revealing that it’s not a train bearing down on us. I want to show that change is possible, even while the horror circles around us. I want to show that mankind can evolve, we can learn, we can change, and make things better. 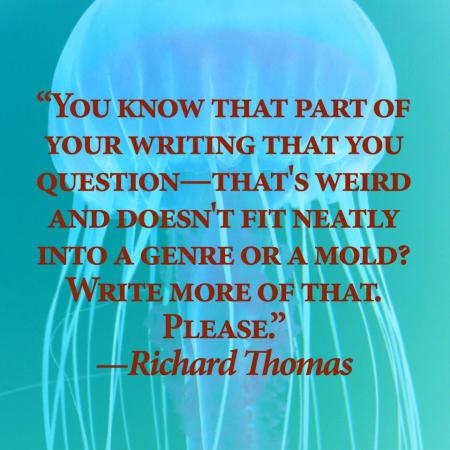 What makes your work uniquely you? You do, brother. Whatever your combination, there is nobody in the world that is exactly you. You ARE that shimmering snowflake—and I mean that as a compliment, LOL. Your childhood, your education, your friends, your job, your city, your country, your orientation, your culture, your religion, your mind, body, and soul—all of that is a combination that nobody else in the world has. When you think about your favorite author—whether that is Kelly Link, Toni Morrison, Brian Evenson, Alyssa Wong, Livia Llewellyn, Stephen Graham Jones, Joyce Carol Oates, Jeff VanderMeer, A.C. Wise, Victor LaValle, Stephen King, Usman T. Malik, or China Mieville—think about what they do that is uniquely them. I guarantee they have at least one unique trait that defines and separates them from other writers in their genre (or genres).

There is an image I designed that is the pinned post on my Twitter page, and I’ll include it here. It says, “You know that part of your writing that you question—that’s weird and doesn’t fit neatly into a genre or mold? Write more of that. Please.”

Get The Best Horror of the Year Vol. 13 at Amazon