Have you ever sat down to write a short story (or a novel) and thought about what season you were going to set it in? No? Maybe you should. If you’ve taken my classes or been reading this column for a while you’ve heard me say “all things serve the beam.” This refers to Stephen King’s Dark Tower series. It means your story needs to keep servicing the heart of your story—the internal and external conflicts, the themes, your protagonist, the genre, the plot. And weather, the four seasons, they can do that as well. Not just physically, but the symbolism that comes with each season. Let’s dig in a little bit, shall we?

When you think about winter, you think about the cold—snow, ice, and freezing temperatures. The colors that come to mind for me are white, blue, and gray. The emotions for me are silence, isolation, and loss. The symbolism of winter is an end to things, a death, where people stay inside, trees have bare branches, grass has lost its luster, and plants have withered and given up. It is an end to things, and sometimes out of that ending, comes something positive

I’ve used winter a lot in my writing, since I live in Chicago, and have spent a lot of time in this season. In fact, looking out my window right now it’s cold—26 degrees, with an inch of snow on the ground. My novel, Disintegration, is set in Wicker Park in the winter, because it’s a story about isolation, about sneaking around in the shadows, about one man’s descent into a solitude and grief that is nearly all consuming. The weather and seasons further accentuated the plot, the genre, the protagonist, and the atmosphere. Same thing with my new novel, Incarnate—an arctic horror, sin-eater book inspired by The Thing, The Terror, and The Giver. In that book, not only does winter mean cold, it means danger. In this small town, based on Barrow, Alaska / The Arctic, it’s dangerous, in so many ways, and that is a theme that runs through the book. Below the sin-eater story, and the monsters he births into reality, and his own internal struggles, there is the location, the wild animals, the ways people die out here, the loneliness, and the depression. That all works together. 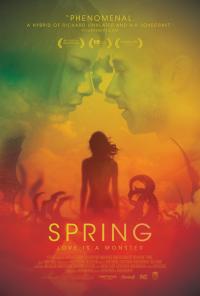 When you think about spring you think about warmth—a thawing of the snow and ice, the sun starting to come out. The colors that come to mind are pastels—pinks and yellows and greens. The emotions for me are hope, love, and optimism. The symbolism is growth, and rebirth, the phoenix rising out of the ashes, flowers and nature coming back, life renewed.

Spring is not a season I have consciously used a lot in my writing, but the idea of rebirth? That is something I’ve visited quite a lot. I did have a story, “Flowers for Jessica,” that spoke to the idea of rebirth, a resurrection, and it used nature and the imagery of flowers, vines, grasses, and buds to bring her back to life. It’s easy to see how you might use this rebirth as metaphor, or simile, using flowers and growth as a symbol for something new, a second chance, a new start. Or, something dormant that comes back to life. Mostly when I think of spring I think of positive emotions, whereas winter is filled with darkness, a bleakness. If you’ve seen the movie Spring, you know that there can be other things woven into nature and rebirth. If you’ve read Annihilation, you can see how nature can be strange, and dangerous, even as it is wondrous, fascinating, and beautiful. Remember the thistle scene? The dominant emotions and symbols in spring are positive, but sometimes they are draped over something else, covering up that decay and stench, with the sweet smell of roses, lavender, or freshly cut grass.

When you think about summer you think about heat—a brightness that cannot be contained, life and action, people outside, children and dogs and sports. The colors that come to mind are yellow and orange and red. The symbolism is freedom, and nostalgia, and family. It’s no school, and traveling, and a ripeness—food and drink and life.

“Golden Sun” is the last “summer” story I crafted, a novelette that was co-written with Damien Angelica Walters, Kristi DeMeester, and Michael Wehunt. It got into Chiral Mad 4, and then The Best Horror of the Year. We purposeful sat down and discussed how we could make this horror story more original. We decided night was typical, so we went with day. We decided that a haunted house, the woods, a graveyard, an asylum were all too common—so we chose a beach. We talked about the seasons and—you know what’s coming—thought winter (death) and fall (dying) were too obvious, passing on spring (rebirth) for summer and its brightness, feeling like this was the least likely to scream horror. In that space we looked how heat can be overwhelming, can lead to exhaustion, to dangerous burns. We looked at the way you might get lost on the dunes, and how that strange man, and that weird bottle might have a message that leads to a disappearing child. We took the screams of the beach, and the fish that live and die, a family on a vacation and turned it this way and that, leaning into the weird, but starting from a place of peace, rest, and relaxation.

When you think about fall you think about dying—the colors of leaves turning, their eventual fall from the branches, the blooms and buds of spring and summer slowly disappearing, as the palette fades to gray. The colors that come to mind are similar to summer—starting with the green, and then turning to yellow and orange and red—eventually finding brown, eventually turning to brown and gray. The symbolism of fall is a decline, dying, change, and failure.

The emotions of this season are right in the word fall—to drop or descend to a lower place through loss or lack of support; to come to a lower position; to become less or lower; a decline. You can literally fall from a height—like the leaves do—or you can fall from a higher status, you can fail, and lose what you have. Spring and that rebirth is far away, winter close at hand, maybe something you can work through, and maybe not. Maybe there are lessons to be learned in this humbling, and maybe you can get back up.

Many of my stories deal with this concept: In “Repent” a bad cop falls from a place of power and status, his choice to make the ultimate sacrifice a redemption that may save his son’s life; “Requital” a purgatory of sorts, as a man with a powerful career pays the price for his transgressions, a looping hell righting the scales of justice; “Undone” a breathy rush across 1,501-words in one sentence, knowing the price he’ll have to pay, but hoping that what he births will save the world.

Weather and the seasons may seem like an obvious aspect of your stories, but don’t sleep on the choices you make when writing that story or novel. These choices need to be purposeful, they need to serve your story, supporting and enhancing your setting, your protagonist, your genre, and your plot. Look for the symbolism, the emotions, the colors and then make it your own.

Get Spontaneous Combustion at Bookshop or Amazon