Storyville: The DOs and DONTs of Running a Successful Kickstarter Campaign

So you’ve probably heard about the Kickstarter I ran this past February, raising over $55,000 to launch a new online magazine of neo-noir, speculative fiction with a literary bent—Gamut. Here are some of the lessons I learned during this rollercoaster of a month.

DO care about what you’re doing. It has to matter to you. A lot.

DO plan for months before you start. There are so many different variables, make sure you have all of your ducks lined up in a row.

DON’T forget that Kickstarter takes out 8-10% of what you get.

DO plan on getting up early, working all day, and staying up late. I put in many, many 17-hour days.

DON’T spam. There were a lot of posts shared on Facebook and Twitter over the month of February, but I typically only posted myself once or twice a day. I posted in groups once at the beginning and once at the end.

DO send individual messages to as many people as possible. I probably reached out to hundreds, maybe thousands of people, over the course of the month. I was shocked that so many people had no idea that I was in the middle of a Kickstarter.

DO spend money on Facebook ads. I found that being strategic, you can really get some excellent exposure, netting thousands of eyeballs for $5-10 per post. I think I maybe spent $100-150 over the entire month. 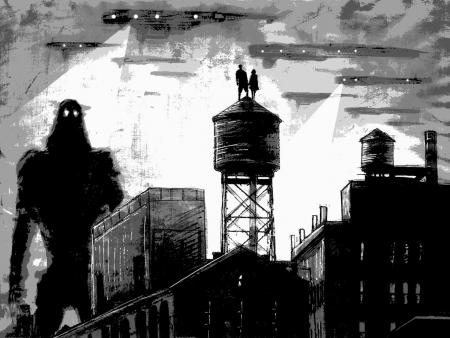 DO use images when you post. I find that people respond to art more than just words and the same old link. I spent a lot of time getting original drawings, and putting together original graphics for the campaign, so people wouldn’t get sick of the same old art.

DO use videos. We used them on the actual Kickstarter and across social media as well. You never know what will convince somebody to jump in, but videos are a personal way to reach out.

DON’T count on your friends to spend their money. It would be nice if they did, and many will, but don’t count on it.

DON’T let it get you down.

Conversely, DON’T be surprised if other people, sometimes family and friends, sometimes total strangers, step up and donate generously.

DO work as a group. I was lucky to have a talented staff in Mercedes, Heather, Dino, Casey and Whittney to help me get the word out. I also had a lot of people step up to donate items, which was truly inspiring—too many to even name.

DO use all of the social media you have—Facebook, Twitter, blogs, newsletters, websites, interviews, podcasts, and the Kickstarter tools as well.

DON’T be rigid. Go with the flow, change and edit, try new things, do what you have to do in order for the Kickstarter to be a success.

DO ask your authors for help. I tried not to bother my authors too much during the campaign, but I did drop them a few notes during the month.

DO get endorsements. I think it carries a lot of weight, and I not only reached out to authors, but publishers and editors as well.

DO write a press release. This was something I forgot about until right before we launched, and luckily I got some help from a professional. I think it's a great tool for media, and shows you’re serious and have your act together.

DON’T be too proud to ask for help. At first, I turned people away, but as the month went on, I realized I needed all the help I could get, so I accepted most of it.

DO clear your schedule and try to be available most of the time.

DON’T be impersonal. I found that any mass emails or notes I sent out got the worst response. Take the time to reach out one at a time, even if it means hours, instead of minutes.

DO remain excited and optimistic.

DON’T give up. Ever. We hit a slow spell in the middle, as most campaigns do, but had a great surge at the end. I had several people reach out to say they’d help cover it if we came up a little short. It was inspiring.

DO go after your dreams.