Today we’re going to discuss how to leave room for the reader, when it comes to your writing—flash fiction, short stories, novelettes, novellas, and novels.

So when I say that you need to “leave room for the reader,” what exactly am I talking about? Well, let me try to explain. When somebody is reading your fiction, you need to tell them things, show them things, and paint a picture, right? You are worried about hooking them, building up a world, adding tension as you increase the stakes, showing setting as you go from place to place. Also, developing characters that are layered, easy to differentiate between, filled with motivations, emotions, and depth. You’re doing quite a few things all at the same time. But one of the most important things you need to do is leave room for the reader to insert their own views, beliefs, interpretations, and thoughts.

Let me elaborate. One way that you do NOT leave room for the reader, is to tell them what something is. This comes up when we talk about show vs. tell. When you TELL the reader that the man is evil, when you say that the succubus is beautiful, when you describe a house as haunted—that’s rendering judgment, that’s a finality that leaves no room for interpretation. So that leaves no room for the reader. It’s definitive, it’s said and done, it’s carved in stone—these are FACTS. And you don’t always want do to that.

Instead, you want to show that man doing something bad, you want to dress him in a manner that reveals he is falling apart, he has done bad things, he is somebody to be avoided. What might that look like? A scar on his cheek, a limp, a horrible smell about him, something wrong with his eyeballs, bad breath, gnarled hands and knuckles, weapons on his person, actions that get you to hate him, or fear him, language and dialogue that makes you angry or fearful. Do you show him hurting others, raping and killing, doing dark deeds? Do you have him say things that are hateful, especially to those that are vulnerable, and does he relish the way that people avoid him, move away, cower in fear? In your book, what would have to happen for him to be evil, or cursed, or dangerous?

When it comes to show vs. tell—show us, and then let us decide.

When you describe a house as haunted—that’s rendering judgment, that’s a finality that leaves no room for interpretation.

Leaving room for the reader to interpret. What exactly does that mean? You may show a symbol throughout your story—what does the color blue mean—is it loss, sadness, or freedom? What does a cross represent, a lightning bolt, strange hieroglyphics? What about the animals in your story? There is a big difference between a rabbit and a bear and a tentacled beast. The creature you see in the woods, in the basement, in the ocean—that can lead you into fantasy and magic, nature and realism, or the horrific and unsettling. So when you present your case to an audience, leave some things open to interpretation. Make them ask questions, help them to figure things out, discovering answers, resolving conflicts, solving mysteries. You want them to ask questions, and then work hard to get the answers. That might look like this:

You want your readership to question things, and to look for clues about what’s really going on. When their “Spidey-Sense” is tingling, that means they are their toes, looking for a problem. They are suspicious. So give them something to chase.

In addition to interpreting things, readers want to solve things. So if you leave room for them to figure things out, then you can take them down certain paths. This is where a more advanced author can really manipulate a reader. The reader looks at a character and thinks thief, demon, angel, liar, beast. They look at the plot and think, “Oh, I know where this is going. I’ve got this all figured out.” They look at expectations, at promises made, at the genre (or genres) you are writing and say, “This is what’s going to happen.” And then you find a way to both give that to them, and then take it beyond that. Let me explain.

You want the reader to have ownership. And when they can see something coming, when they can figure out a plot point ahead of the reveal, when they can see through the lies to the dark truth buried beneath it—that’s a satisfying feeling. They want to feel smart, they want to understand so they can react appropriately, they want to prepare themselves for whatever is coming—good or bad. Give them ten tiny breadcrumb clues that add up to a piece of knowledge that one or two or five can’t do alone.

And then find a way to twist that reveal.

You want to surprise them, but you want to give them what you promised. Yes, the father and son will get out of the woods, they will survive because of the magical rabbit and some dark deeds, which may (or may not) shock and surprise you, but the aftermath is what you might not see coming. You solved this puzzle, yes, but you didn’t see the impact, the emotion, the fallout. Yes, the cop and father is a bad man, and you’ve grown to hate him, but when it comes time to save the boy, did you think he’d go this far? And that final price he pays, you knew there was going to be a cost, but did you think you’d be moved by his sacrifice, by his total erasure? Yes, the girl has turned out to be a robot, artificial intelligence, and maybe you saw that coming, but did you fully understand what was happening in this laboratory, and why this man had to be a bad person, how that was the essential catalyst that would lead to change—this evolutionary leap, this collective subconscious? And what comes after that, does it resonate even more, now? If you’ve read these stories you know what I’m talking about. If you haven’t, hopefully you can see how they might resonate anyway. 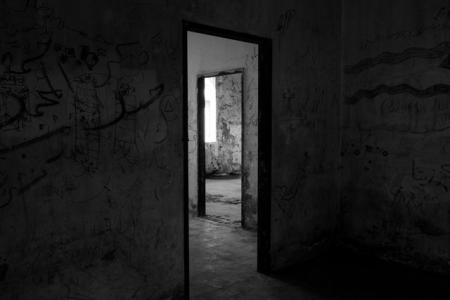 Whether your framework is a metal shelving unit, a bony skeleton, or a coatrack birthed from magic, you need something to hang the meat on, in order to tell your stories. You want to sketch in the rooms, the houses, the woods, and the UFOs so that your audience can fill in the spaces you leave with their own experiences—from real life, from books, and from films. You want to leave room for them to judge, instead of you telling them what to think and feel. You want to leave things open to interpretation—be ambiguous now and then—maybe even finishing with an open-ended climax, so that they can make that leap, and tell us what has happened. It’s a ghost, it’s a familiar, it’s a monster under the bed, it’s an emotion made manifest. You want to string them along and have them solve the mysteries one by one as they work their way to the climax—a few surprises still up your sleeve. If only the father had waited in the mist for a few more minutes. If only the villagers had gone outside the walls, then they’d really know what was going on. If only that old boy hadn’t done what he did, then the pain and suffering wouldn’t be so twisted, deep, and shocking. If you know what I mean, then you know what I mean. If you can leave room for the readers, as you write a powerful, layered story, waving a hand to distract, as you work your magic over here in the shadows—then you have a chance at creating something special. It can be both earned and surprising, both expected and different, both unsettling and inspiring. It’s not easy, but with practice, you can do it every time. Good luck!