Storykiller: Get Thee Back To Kickstarter! 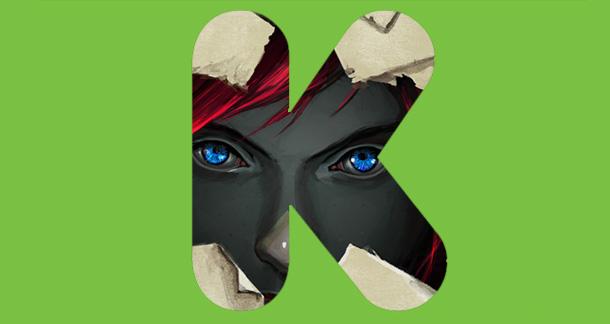 I’m headed back to Kickstarter (today, actually) with my new novel. The "why" is both incredibly simple and incredibly complex.

The simple is: because “traditional publishing” still won’t have me, or at least it won’t have me so far as my agent can tell from a reasonable effort in 2013. This new book was out to a handful of publishers for about six months. We did get an interesting bite about five months in that resulted in what was essentially a request to “revise and resubmit” with an exclusive (for a few weeks) to look at that revision. I did the r&r, and when the exclusive was up we sent out the revision to a few new publishers. We gave it another couple months.

In the scope of how long publishing takes and what a slow process it is, it’s possible if I had given it more time, we still could have sold. But after the success I saw on Kickstarter in 2012 and with self-publishing post my campaign, I admit that my patience was a bit thin. I felt I had other options and they gnawed at me as we waited. I told my agent I was putting a December 1st deadline on selling. If we hadn’t sold by then, or didn’t have significant interest, I wanted to pull the novel and just do it myself. In my mind, that would have been about eight months on sub, and more than enough time. As most of us know, eight months is actually not "enough time." It’s an incredibly short amount of time in the scheme of publishing. But I’m no spring chicken, and I have grown tired of waiting for other people to decide what I can and can’t do. I couldn't help but do the math in my head. If a publisher bought my novel TODAY I was looking at between 12 and 24 months before it would be published. If I did it myself, I knew I could have it out within six months. Traditional publishing never had a chance. I bear traditional publishing no ill will, and I still hope one day that they will take me into their warm embrace and I'll get to find out firsthand if it's something for me or not, but this is a brave new world, and one in which I don’t have to wait for someone else to decide.

Perhaps even more honestly, the siren song of self-publishing was calling to me, and I sort of couldn’t wait to crash on those rocks again.

I yearned for the chance to get my work back out there, to get my hands dirty in process and collaboration, to work with incredible artists and editors to bring something I believed in to life (or at least life that others could see, since it had been alive for me since 2011). I was excited to know that nobody could veto my title (which I am admittedly unreasonably attached to), and that I could use the best illustrator for the job and not have a cover designed by committee. My last cover by the same artist — Stephanie Hans — brought me far more attention than I ever deserved, and I knew given the opportunity she could do that for me again. I thrilled at the idea of no arbitrary page counts, of letting my characters swear (even the big boy words) when they wanted to despite the book being YA, and I ached for that grass roots community feeling of connecting directly with my readers.

Sounds like a slam dunk, right? Why would I ever even consider doing it another way?

Because then I remembered the OTHER things. The not so pleasant things.

That’s right, my gmail file for the last Kickstarter campaign has 1869 CONVERSATIONS. Not emails, CONVERSATIONS. Holy hell in a goddamn hand basket. And you know what? That’s not even the only Kickstarter related file. The next largest has 402 conversations. After that they slim down to at least the double digits, but JEEZ.

You know what else I almost forgot about? My New York apartment looking like this not long after book delivery: 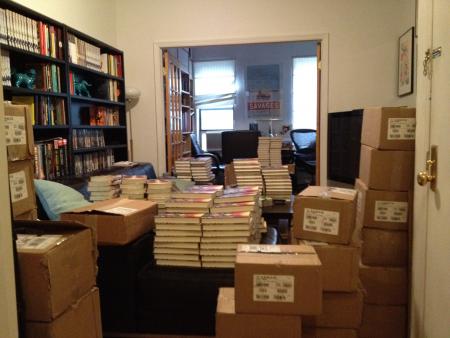 And as these things came back to me, I definitely remembered how nearly half my boxes arrived in this condition, meaning over a hundred of my books were damaged (thanks UPS!): 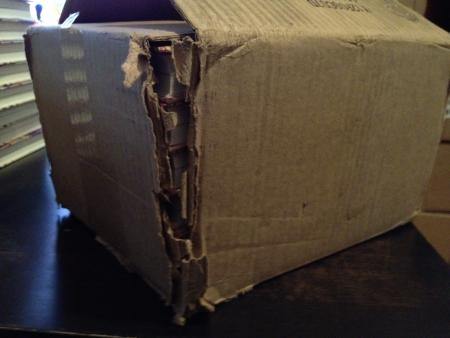 And that helped me remember my most hated part of a successful Kickstarter campaign to self publish: the mailing. Oh, the dreaded mailing. Days and days of living like this (actually, more like weeks): 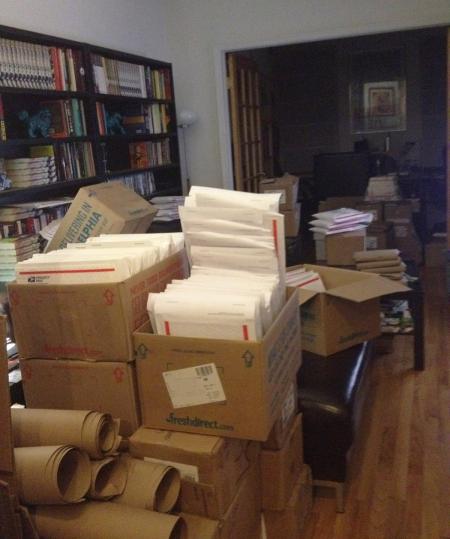 Though I think (hope?!) I've come up with a way to mitigate most of the space and mailing issues, that was such a small part of the horror. The most significant horror was the fact that at the end of all rewards being shipped, I was actually in the red. Not to an extreme degree, but enough that it was a legitimate concern. However, even though I had lost money, I had product to sell: a digital edition that was doing well online and, most importantly, a printed book that people were actually ordering from me (as well as POD paperback versions people could buy online).

And because I had done the Kickstarter, rather than just publishing quietly to Amazon, I had really raised my profile. I had 700+ immediate sales via the Kickstarter and that was translating to a significant number of fast reviews on Amazon and Goodreads. Some small review blogs starting noticing the book and doing reviews, and word of mouth was far better and broader than I expected. A huge high profile review about three months after I’d finished shipping all my Kickstarter product launched my book into Kindle Best Seller status and swarmed me with orders for the expensive print version as well as helped get me a manager.

Had I not done the Kickstarter, had I not opted to self-publish, would that book just be sitting on my computer and in my filing cabinet somewhere gathering dust? It boggles the mind to even think about. So when it was time to think about trunking my new novel and moving on to the next project or to Kickstart/self-publish, I don’t even think it was a real question. How could I deny the good that had come from taking the risk and doing all that hard work? It had paid off in ways I had never even imagined.

A friend that must have heard me complaining a lot about how tough it had all been (or maybe he’d just seen the nightmare photos) asked me why I would even consider doing Kickstarter again and the answer was simple: I hadn't worked a full-time “straight” job since I published in the winter of 2012. Self-publishing hasn’t made me rich. Far from it. In fact, money has never been tighter, and I still may have to go back to a “straight job” this year (or the next, or the year after that). But for 2013 I was a full time writer, which was all I’ve ever wanted (well, that and a swimming pool). I had to hustle like crazy to get people to see and buy my book, to find new avenues for reviews, to continue doing freelance work for miniscule pay, and to try my damnedest to write the next thing that’s going to pay me enough money to survive for another year. But that ability to call myself a full time writer for the last year was worth its weight in gold.

If I have even a chance of getting another year of that, why wouldn’t I move heaven and earth to get it?

And so here we go with STORYKILLER. Wish me luck! 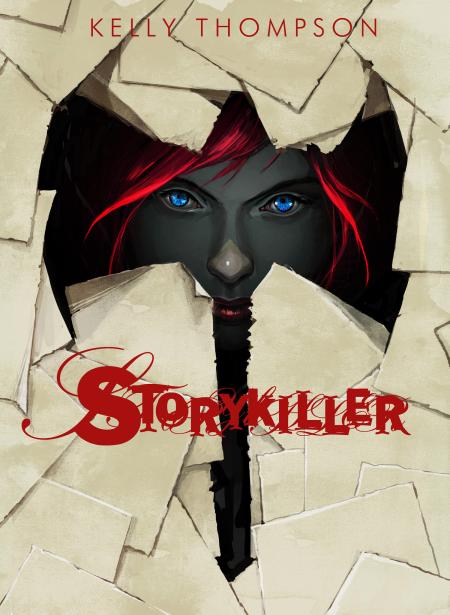 What I Learned From My Kickstarter Campaign
The Long & Winding Road: Part VI - What Happens When Your Book Doesn't Sell

At this moment Kelly & Steph are killing it on Kickstarter. Add that to your time wasting comments.

With all my support,

Joshua Chaplinsky from New York is reading a lot more during the quarantine January 22, 2014 - 11:46am

Tony McMillen from Mostly glorious Tucson Arizona but now I live near Boston. is reading Not, I'm writing January 31, 2014 - 7:33am

Kelly Thompson's articles about her kickstarter have helped me a lot with figuring out my own kickstarter campaign for my book and were a big part of me making that a success last year. All the do's and do-not-do's of crowdfunding and whatnot that she laid out really gave me a clear idea of what to aim for with my own self publishing. This article is thankfully more of the same.  Also I like the title of the new book, neat logo to boot.

I was browsing Litreactor, saw the TGWWBK ad and wondered how that was working out for you since your update last January. Did a little search and up came this column. Looks like Storykiller is mopping up on Kickstarter. Congrats!

It’s also inspiring to hear that you were able to parlay your first novel’s success into a full time writing stint. That sounds like a dream come true. Wishing you continued success. Keep us updated!