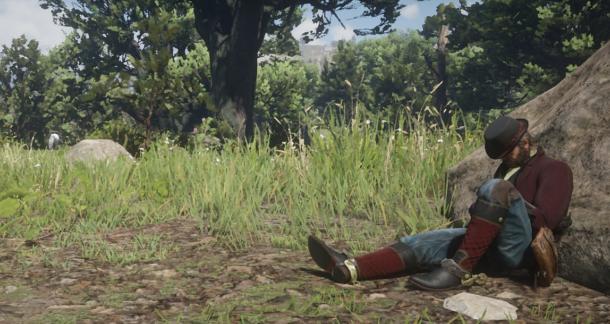 Red Dead Redemption 2 has been out for over a month now, and is quickly on its way to becoming the biggest thing ever. It has become a central pillar of the pop cultural discussion in a way that seldom happens anymore, not just for video games, but all art. Movies, TV shows and even books that everybody is consuming at the same time are increasingly rare. There are fewer guaranteed conversation starters around the water-coolers of the world—it’s increasingly unlikely that co-workers and acquaintances are binging the same entertainment as you. That is, unless it’s Red Dead Redemption 2. Everyone wants to talk about the game, whether they’re playing it or not. YouTube is flooded with videos showing you how to find every unique piece of content in the expansive world, and the creators of South Park have been unable to avoid gushing over it for two episodes. Even my non-gamer girlfriend sat and watched the main missions with rapt attention, and made me replay key story beats if she missed them (which I was always happy to do).

I actually went back and read through [the journal] from the beginning, and discovered it had turned my 80+ hours of play into an entertaining little Western novella...

While part of the reason for its popularity is no doubt the impressive display of technical mastery, Red Dead Redemption 2 is also superior to its predecessor in its narrative. The game features a very grounded, deliberately paced, character-driven drama, with a more interesting protagonist than video games typically get. It’s a slow burn, with the attention to details and gradual development that is common in the very best of prestige television. In the game’s final chapter, you are still learning surprising things that change how you look at a character you’ve already known for fifty hours or more.

The central pillar supporting the story is the character of Arthur Morgan. While he may be less sympathetic than John Marston, the hero of the previous installment, Arthur is much more complex. You know exactly what John is about after your first few missions with him, and he doesn’t really change for better or worse. Arthur is a puzzle you struggle to solve for the entire game, and every time you think you have him pegged, he proves you wrong. He is a man of contradictions, not easily summarized. There is a depth to Mr. Morgan that is shared by few video game protagonists, and that is largely due to the beautiful leather-bound journal he keeps in his satchel.

Throughout his journey, Arthur will fill its pages with his thoughts, and supplement them with some truly excellent pencil sketches. While journals are not uncommon in sprawling story-driven games, they usually function as little more than a quest log. They may be written in the first person or have some flavor text, but they’re usually just a list of things you’ve done and have yet to do. Arthur Morgan’s journal does so much more than just summarize what he has done—it also tells you how he feels about it. Every side quest, odd stranger and bizarre sight he encounters gets a few words and maybe a sketch. After I finished the main campaign, I actually went back and read through it from the beginning, and discovered it had turned my 80+ hours of play into an entertaining little Western novella, like a lost Ralph Compton novel found in a dusty old footlocker. I can’t remember the last time I did that for a video game.

The journal also solves one of the biggest problems in open-world storytelling—ludonarrative dissonance. Basically, the conflict between a game’s story and play mechanics. A classic example is Grand Theft Auto IV, in which protagonist Niko Bellic laments his violent life and wishes he could leave it all behind, but constantly engages in bank heists and murder-for-hire gigs when he’s not indiscriminately slaughtering civilians. Was Niko conflicted, crazy, or just poorly written? GTA V’s answer was the character of Trevor, the chaotic player personified in pixels. Red Dead Redemption 2’s solution is Arthur Morgan’s journal. It provides insight into the character’s interior life that we rarely see outside of novels. Play as a homicidal maniac and the journal entries become quite cynical, fatalistic, and downright depressing. But if you’re more of an honorable thief, Arthur will ponder the morality of his actions and express hope for redemption. He doesn’t just weigh in on the major story events, either. The many beatings and killings of his career are catalogued without remorse, but he feels ashamed to collect on a debt. Arthur reaffirms his undying loyalty to Dutch even as his doubts pile up. Sometimes, he ponders running off to live a decent life with his one true love, before returning to the cold certainty that he will ride or die for the Van der Linde Gang. He chastises himself for even considering he might have a happy ending: “Torn in two by different ideas of who you were, and it turns out you weren’t neither of them.”

Why do Arthur’s words conflict with his actions? The journal tells us. Because he’s an imperfect human being, and sometimes he does things he doesn’t want to do for reasons he doesn’t entirely understand. He knows he’s in a bad situation, but has no idea how to get out of it. In that way, he’s a video game character we can all relate to, and it is the journal that makes it possible. It’s an innovation I hope other games will be copying for generations to come.