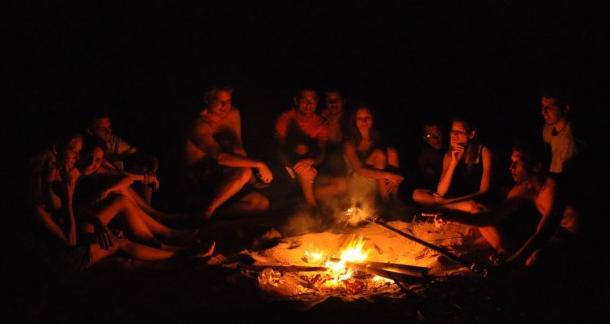 At the time of this writing, it has been less than 24 hours since I watched the pilot episode of The Newsroom. Thanks to the miracle/atrocity that is the Internet, I was, of course, made painfully aware of the general reaction to the show well before I actually sat down and saw a frame of it. I loved it, and soon after tweeted my reaction, adding the sincere question, “Why is everybody panning this again?” Scott Weinberg, film critic, Alien aficionado, and cat-lover extraordinaire, responded, “Because Sorkin sounds like Sorkin, I think.”

Aaron Sorkin does indeed have a record of sounding like Aaron Sorkin, and The Newsroom is no exception. As a writer, Sorkin’s voice is perhaps more clear than any other currently operating within visual media: anyone with a passing familiarity with The West Wing or Sports Night would probably be able to label The Newsroom a Sorkin project even if they’d been locked in a lightless vault for the past several years. The dialogue is rapid-fire, impossibly clever, and moves between turn-on-a-dime witty rejoinders and impassioned, pedantic lectures at a lightning-quick pace. All of this is vintage Sorkin, yet some of the more casual critiques (the show seems to rub many members of the news media the wrong way, which I suppose makes it effective in its own right) seem to hold up the dialogue, the pacing, and the bold, sweeping, ideological pronouncements as their main gripes. It’s not exactly a fair counterargument to ask these people what they were expecting from an Aaron Sorkin project, but it is puzzling when you consider that Sorkin is dipping into the same playbook that has yielded critical if not always commercial results for years.

This brings us back to a question that’s been plaguing me ever since I viewed the incredibly interesting and deeply flawed Prometheus (I apologize for the Hollywood-centric nature of this article to all the book-lovers, but bear with me). Despite all its failings, Ridley Scott’s latest project, written by John Spaihts with (I suspect) intense re-writes from Damon Lindelof, is nothing if not novel, at least when considered within the universe of the previous Alien films, to which the story of Prometheus is only tangentially related. It’s difficult to explain exactly what is wrong with the film without getting deep into spoiler territory (those of you who have seen it can read this article), but most critics, myself included, seem to agree that the script is riddled with mechanical issues: unresolved story arcs, confusing character motivations, jarring pacing, and misuse of ambiguity being chief among them.

Even Sorkin’s most outspoken critics would probably stop short of calling him a bad writer. Sorkin is, in my humble, totally unqualified opinion, an objectively good writer insofar as he understands characters, plot, and pacing to such a degree that he can churn out something that is, at the very least engaging, with masterful ease. Lindelof, on the other hand, seems either unable or unwilling to stick to even the most basic criteria for what makes a script “good” from a functional, Robert McKee-esque standpoint. However, the former has a string of canceled shows and scathing reviews attached to his work, while the latter was deeply involved with one of the most successful television shows of all time (Lost, for all its flaws, was instrumental in bringing television out of the 90s Dark Age), and managed to sharply divide the critical response to a film that should, by all rights, be considered terrible. The question of the day, then, assuming that most people who watch television and movies aren’t idiots with bad taste (like I said, bear with me), is this: is it better to be “good” or “unique”?

If art, at its finest point, exists as a commentary on the world around us, then does art with a feedback loop represent the next evolutionary step?

Let’s get the obvious out of the way: one quality does not necessarily preclude the other. However, the information age has brought about unparalleled access in terms of both contact and feedback. A large number of consumers seem to demand novelty, and the industries built around storytelling have, by and large, risen up to meet that demand, even if means repackaging a familiar story in a way that seems fresh and exciting. Subject matter aside, it’s hard to argue that Prometheus was not original in the way it dealt with the nuts-and-bolts mechanics of writing and story development. A cynical naysayer (like myself) might say that Lindelof basically threw out everything but the kitchen sink, and built a script from the ground up using only vague, ethereal thematic arcs as his outline. As a result, the film built an immediately satisfactory experience that fell apart for those who require cohesive narration. It’s a film that works almost entirely on visuals, world-building, and half-baked gimmicks that add up to little more than a beautiful disaster. And of course, the fact that no Lindelof-hater wants to admit: the themes, vague and half-baked as the are, are interesting and have prompted discussions that are often more engaging than the film itself.

This kind of tinkering and wheel-reinventing can work within the confines of a motion picture, simply because it’s one of the most contained storytelling mediums available. Even if you walked out of Prometheus with nothing but bile in your throat, your overall commitment was around two hours, versus weeks for a novel and possibly years for a television series. That’s why I’m very cautious when it comes to picking up the hot new thing in print or television (I’m only just now reading A Game of Thrones and loving it), yet it takes little more than boredom to get my ass into a theater. Furthermore, the relative simplicity of the printed word somewhat limits authors from branching out into form-experimentation. There are of course, notable exceptions, but unlike film and television, trends in book-buying would suggest that the vast majority of readers prefer their literature clean and simple. For every copy of House of Leaves that is sold, another eighty million Michael Chrichton and George R.R. Martin books fly off the shelves. I’m hard-pressed to say exactly why this is, but it seems like when we sit down in front of a screen, we usually want something new and exciting to wow us, whereas we tend to expect a more traditional experience when putting our noses over a printed page.

The most obvious answer is that film and television are mediums based in constantly evolving technology. Books, until very recently, have always been confined to ink and paper, so the capacity for innovation has been slight. Time will tell if tablets and eReaders yield a demand for more interesting book and story formats (there are currently some incredible things happening in children’s fiction). While bitter traditionalists like myself may shudder at the thought of a world in which the importance of character, dialogue, and narrative arc are superseded by armchair philosophy and pretty eye candy, it’s not hard to imagine bitter traditionalists complaining about the advent of sync-sound and other innovations that are now taken for granted.

Devil's advocates take note: it's entirely valid to suggest that the goals of younger writers working for younger audiences differ entirely from those of yesteryear. One thing both Lost and Prometheus did extraordinarily well was get people thinking critically about the "big questions", usually because the product itself left those big questions completely unanswered. Purists might call this unsatisfying (I certainly do), but maybe there's something to be said for writing that concerns itself more with what it can awaken within the audience than what it says about the author. It's the difference between performance art and interactive art: while one may have a more culturally rich history, the other speaks of a fundamental understanding of (and even the ability to manipulate) human nature. If art, at its finest point, exists as a commentary on the world around us, then does art with a feedback loop represent the next evolutionary step?

If the new generation of audiences crave something that is more interactive and customizable, do they miss out on some fundamental values that inflexible narratives instill? (It’s not always best that we’re given exactly what we want, even as adults, after all.) Is it enough for a work of art, specifically, a story, to only prompt individuals to think on their own in a compelling way, or is the craft of writing and its associated fundamentals king above all else?

Very interesting piece. It is my hope that the future of literature and art lies somewhere in between what you talk about in this article. That is a work that both satisfies both the need for  a strong narrative structure, but also awakens discussion of greater concepts. Since you brought up Ridley Scott, I think an excellent example of a work that does both very well is Blade Runner.

Joshua Chaplinsky from New York is reading a lot more during the quarantine July 17, 2012 - 5:45am

I think I told you this when you pitched this column, John: Sometimes I prefer a flawed book or film that takes chances and does something different over one that is pitch perfect but doesn't have anything new to offer. And sometimes those flaws can be exciting (but not in the case of Prometheus).

I thought Prometheus, warts, and all, was actually a compelling experience only because of its ambition and how completely and utterly it failed in achieving its goals.