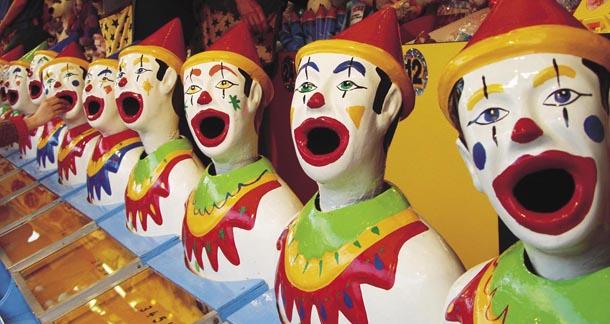 A few weeks ago, a friend I am making up for the purpose of this article was experiencing some problems with a story he was attempting to write. He asked me if I could help him out. I said probably not, but considering he was a figment of my imagination, who the hell else was he going to ask?

"Well, I'm trying to write a short story for this circuspunk anthology, and I am afraid there aren't enough clowns in it. Plus, most of it doesn't even take place at a circus or carnival. Just, like, one scene. Man, I suck at this."

"First off," I said, "what the hell is circuspunk?"

My imaginary friend rolled his eyes. "Circuspunk is a genre for bizarro horror stories that involve circuses and clowns, stuff like that."

"So, horror stories that happen to take place at a circus?"

"Yeah, that's what I said, King of Redundancy."

Don't let stereotypes and fictional guidelines silence your originality...There are no rules here.

"That's not a genre. That's just a setting."

"Nah, man, it's totally a genre. These bizarro people made it up."

"Just because someone says something is a genre, that doesn't mean it's a genre."

"And just because someone says something isn't a genre, that doesn't mean it isn't."

Damn. I had created this person to be too much of a smartass. Way to go, brain. "Look," I said, "in the beginning of Stephen King's The Dead Zone, there is a pivotal scene taking place at a carnival. Does that make the book circuspunk?"

I nodded. "Right, even if the entire book took place at the carnival, it still wouldn't be circuspunk. It's just horror, okay? Horror is an actual emotion, and circuspunk is...I don't even know, that's how much this conversation has hurt my brain so far. But even then, who cares? I could argue that The Dead Zone was also a political thriller—but why? Do you think when King started writing the book, he was stressing over genre boundaries? Or do you think he was more concerned about writing the best book he had in him?"

"You're right. I guess he was more focused on story and character than meeting clown quotas. Now calm down. Stop hitting me."

"Now you're just making these up."

"Definitely. But don't you get what I'm saying? You heard all those genres. They all have their own distinctions. Try limiting your story to one of them and it's going to kill you. Blend them all together if you want to. Shove them into a blender and make a delicious smoothie. Don't take it too seriously, do not let it slow you down. Genre will just get in your way. People create these arbitrary rules for writers and none of them mean a thing."

"Nothing means anything. Time is a flat circle."

"Ugh, I should have never let you watch True Detective."

"We are all genres created by society."

"Okay, stop being weird. I am going to tell you something right here and now that I want you to hold close to your little imaginary heart."

"I really need to learn to create imaginary friends who aren't annoying."

"Hey, it's your own fault. You made me this way. Wait! Maybe we could call this figmentpunk. Congrats, Max! You are the creator of figmentpunk. Don't forget to include this on all your cover letters so publishers know to take you extra seriously."

"Goddammit, shut up. I'm trying to say something here."

"All right, all right. Shutting up."

"Genre exists to limit writers, okay? You gotta break these walls down. Don't let stereotypes and fictional guidelines silence your originality. Too many writers kill their inner desires to write whatever they want in fear of upsetting potential readers because you didn't follow the exact guidelines of your usual genre. These fears want you to die. Chuck them into a fire and be done with them. There are no rules here. Your main characters do not have to end up together happily ever after in your romance story. The scientist does not have to be mad in your science fiction series. Your male protagonist does not have to ruin your female protagonist's face in your latest erotica. Everybody does not have to die in your horror novel. In fact, nobody has to die. There are no rules in fiction. There is only you and the story. Write from your heart and keep the words true, and forget about everything else."

"Wow. That was actually pretty good."

"Thank you. We've gone through multiple drafts now, I would hope it sounded halfway decent."

"Do you honestly think LitReactor is going to publish this article? It's...kind of...uh...bizarro."

And of course, great points :)

That's sort of why I recently chucked genre out the window and decided to focus on how to construct the plot. While that may sound similar at first, bare in mind plots can sometimes cross over various genres.

Like I'm restarting what I used to do, which is thematic enigma plotting. Or having the plot set itself up like a puzzle for the protagonist to solve. Usually something large in scope, like a giant alien planet.

Genre ultmately does mean anything to me.

This "article" is pretty masturbatory. I remember reading something similair written by a young man to himself in my creative writing class...my sophmore year of highschool. Ugh. This is right about that level, just with superior spell check.

Ha, I'd like to see an impressionist try to do a take for each one of those subgenres you  mentioned.

I'm curious, Sanbai, what would have made it better?

Don't criticize without adding possible fixes...this is LitReactor, a writing workshop, after all.

Of course one can't really be surbversive in a genre, if they don't already know what are established in such fiction.

With that said the way genre is treated by genre purists, it really makes me want to tell genre to buzz off to a degree.

Cool article. I like how you did that. And great points too. I've been flip flopping on a story lately because I wasn't sure if I wanted it to be a certain way. So, screw it. I'll leave it as is.

Sanbai, your using the comment section here as an excuse to use the word "masturbatory" was as pleasantly amusing as the article itself.

There's still room for straight genre writing. If you set  out to write a children's mystery, you'd better have some children solving a mystery. If you're a throwback and want to write a Zane Grey-like western, you'd better have a story set in the west and a sheriff and a bad guy and a saloon proprietress with large breasts. There's nothing wrong with genre writing per se.

Is anybody going to say something snarky about my use of the term "per se?" Try it, jerk off.

Your blog is extremely interesting and shows you have done
your researched. I practically like the design template you decided to use and
enjoyed browsing the text in your web site. Keep up the great work, I want to
check back in a few days. You did a great job.