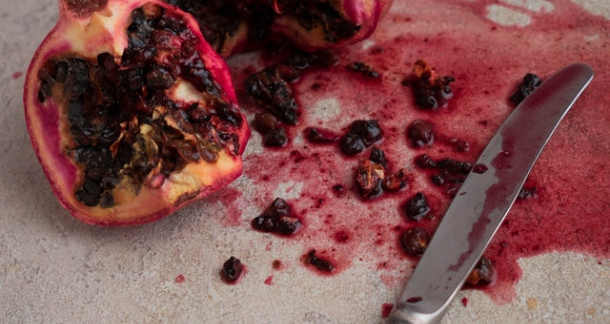 Lately, I’ve been thinking a lot about the line: how it breathes, how it holds itself together, the way it drags us gasping and screaming off the page. At the same time, it’s both vibrant and silent, and yet what’s so fascinating about it is the fact that its importance is so often overlooked because we, as writers and readers, often turn a blind eye to the way it frames the poem, how its skeleton allows us to move and dance and disappear on and off the page. Don’t get me wrong—when I first started out as both a reader and writer of poetry, I was guilty of this, too, but after years of studying and writing, I’ve learned that the line is so much more than a hard enter we push because we want to make the stanzas line up nice and sleek; rather, it’s a moment where we control the voice and tone of the piece, where we can punctuate imagery, give pause to a blood drop, pray for a ghost.

In fact, in a lot of ways, the line is like a stab wound.

Now take a moment and think about your favorite slasher movie. For me, I’m a big fan of the Scream franchise, and in any given moment when Ghostface is threatening to gut someone, or when he’s actually running (and falling) around killing people, there’s this moment when his long, stagnant, white face stares at the person as his knife digs into their chest. Sometimes he’ll even turn it ever so slightly, just to make sure it’s in nice and deep. Ghostface is, after all, nothing less than a dramatic psychopath with a flair for the theatrical. But a truly great example of this is when he first pretends to stab Billy in the original. Right after Sidney loses her virginity (because of course she does), we see Ghostface stab Billy a few times and then stare straight ahead as he wipes the blood—well, ketchup in this case—off the knife with his hand.

This scene, as hokey as it is, stands as a perfect example for how a line functions. See, the stabbing is a repeated, short offense, something that happens quickly, sharply, and carries a lot of shock and horror with it. If we were to see this in a poem, it might look something like this:

Here the words are stacked on top of one another and then surrounded by large gaps of white space on either side. The white space here is a vital accomplice as its presence allows us to concentrate on the word that it’s emphasizing. In this case, we’re homed in on the action, on the act of stabbing, and there’s nothing else around it or beside it to take our focus away from the violence that the line encompasses. Plus, it we look at this abstractly, we can see that having the words stacked like this has given us the horizontal shape of a wound, i.e. the entry point of the knife.

If we continue to write according to the aforementioned stab scene, it’s now time for Ghostface to wipe off his knife. Just as we talked about with the shape of the wound above, we want to mimic the motion of our killer so that the action is represented through the line’s framework. There are a few different ways we can do this:

He wipes off the blood

The first line tells us plain and simple what’s happening in the line, and you could make the argument that much like the act of cleaning a knife, the line ends with the blood coming off and with our eyes looking to the future for the next action. If we turn it up a notch and again think about how visuals affect the tone and pace of the line, the second option is a bit more palpable. By spacing out “blood” and allowing some white space to saturate between the letters, it drags out the word and allows our eyes to sweep through it, a metaphorical cleansing if you will.

Something else that I like to do when it comes to visuals and line play is measure action against word choice. For instance, let’s close our eyes and think of the word drip. Immediately, I’m picturing something falling and eventually exploding against a surface. I also connect it with the word drop, another short, staccato word that plays with both alliteration and onomatopoeia. If we wanted to show the words “drip drops” in the poem, we could draw out the word, quite literally, so our breath and eyes work in tandem with each other until the final word cuts us off and drops off at the end of the poem. For example:

Just as the blood drip drops down the page, so does how we read and speak the poem. I know that when I say this out loud, my words hang on the drip as I slowly enunciate the word only to settle firmly and loudly on the drop at the end of the sentence. Something as subtle as this makes the poem come alive in a way that is both active and present and something that we wouldn’t see or experience if it was all written succinctly in one line.

Remember that the structure of the line is the blueprint to the poem. Sometimes it stands alone, while other times it transitions us, pushes us, forces us into other lines, words, or continuities on the page. What’s important to remember though is that while it’s the bones of the piece, it’s also the air surrounding it, so we need to approach it abstractly just as much as we need to physically see what it’s doing before us. So the next time you sit down with a poem—regardless of whether you’re reading one or writing one—I challenge you to think about how the shape of the poem affects the story that’s being told. Poetry, after all, is a genre that relies heavily on image and emotion, so in that brief snapshot of pain, that quiet moment of suffering, how do we respond to what’s screaming on the page, to what’s leaking off our knife? Do we keep a tidy murder space, or are we more creative, more free-form with our kills? The choice is up to you, of course, just be mindful of the evidence you leave behind.

Get the Scream trilogy at Amazon

It Took Me 10 Years to Publish My Poetry Collection

I want to use this opportunity to tell the whole world on how I become rich and famous. I’m 93 years old. I was passing through difficulty in business and there was no hope of me coming out of my debt.  I borrow  money in my bank to do my business and I run at lost on the business I got frustrated and  decided to be playing lottery to see if I can win and make my business grow and I have played for years now nothing good is coming my way on till I meet someone online talking about Dr Ayoola on the internet. He was taking about how this Dr Ayoola help him to win mega million lottery game. I said to myself if this is true and decide to contact him and told him to help me as well I later read more about this man and see how he has been helping people all over the world. I have faith in him and choose to work with him. After working with him he told me what I need to do for the number to be given to me which I did after he finish working he said I will have a dream and the number will be review to me in the dream. That night has I was sleeping I dream a number immediately he call me and gave me the same number I dream of and ask me to go and play the number. Today I’m here testifying of the good work he did for me I played the number and I won the sum of  1, 000,000 million dollars in a lotto max. You can contact Dr Ayoola for help if you want to win big in lottery game he has the gift of giving right number  contact him today and thank me email him today Via email: drayoolasolutionhome@gmail. com or https://www.facebook.com/Dr-Ayoola-105640401516053/ text or call +14809032128