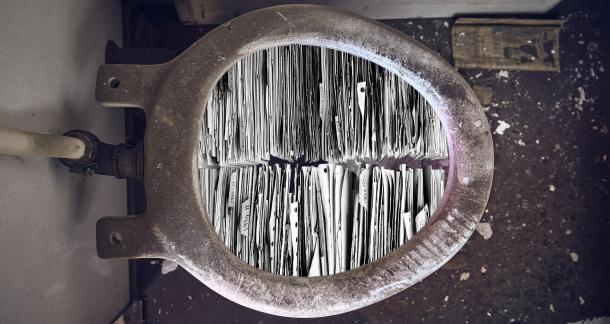 Ah, spring. Nothing like sweating under your coat one day and freezing your junk off the next. Pollen in your nostrils, flu in your eyes. It’s really the perfect preparation for the worst time of year: summer, the suckiest season of all the sucky seasons. Don’t fight me on this.

Most of us tidy in spring. It’s a ritual thing. For whatever reason, this second-worst season is the time we roll up our sleeves and throw out a bunch of crap that we never needed, sell that treadmill/drying rack on Craigslist, and spend about 2 days feeling good before the whole system topples and we’re wallowing in our own filth again.

Spring cleaning doesn’t have to be confined to the garage. It can apply to your writing as well. All the scraps you meant to get to, that unfinished short story, that manuscript that needs a little polish. Admit it, all that crap is piled somewhere, whether it’s digital files or papers on the Junk Mail Plank, a surface some people insist on calling a “dining room table” even though nobody dines on them, ever.

Instead of sweeping the porch (is that necessary? Are you going to eat off it? Because your dining table is covered in crap?), spend this spring cleaning up your work.

All of this applies to both digital and paper.

Some of you are probably like, “Pete, my stuff is digital, so no need to clean!” And while I probably respect something about you, maybe you have good taste in boots, you’re dead wrong about spring cleaning. Digital needs spring cleaning, too.

The limitless space of digital comes with its own problems. Files that have names like, “Draft 002(real draft) (for print) (02-02-2019) - copy.” The mess so tangled that you’ve never bothered to back it up because you’re totally going to organize it first (uh-huh…).

Do yourself a favor, follow one of these methods whether you’re a pen and paper person or a digital devotee.

The easiest way to clean up anything is to straight-up destroy it. Set it aflame and walk away.

If you’re a paper and pen person, any notebook you haven’t cracked in the last year goes in a barrel. Then used kitty litter goes in the barrel. Then fire. Or just shred it or recycle it if you’re not into the drama and don’t own a cat. Also, get a cat.

If you’re digital, it’s less thrilling, but you sort your documents by date, and anything you haven’t modified in the last year is dragged into that recycle bin. You can play some dramatic music while you do this, set the mood.

This method is simple, and it saves you a lot of time you’ll waste shuffling old shit around, tired nonsense you’ll never get to anyway. And it’s a great way to confront the idea that you’ve got a limited quantity of ideas or that your old ideas are the best.

One tip for this method, don’t read through all the old stuff before you destroy it. You won’t be able to go through with it if you get all nostalgic. It’s like smashing a puppy with a hammer. If you look into its eyes first, you’ll never be able to swing.

That was needlessly dark. Oh, well. You read it, not me.

The key to the Kondo Method that most people either hate or ignore is the part where she tells you that organizing isn’t decluttering. It’s not the same. You have to get rid of stuff, not just put it into nice boxes.

Take whatever you’ve got, read a couple lines, and see if it sparks joy.

Maybe joy is the wrong emotion. Does it spark interest on your part? Does it make you want to drop your work in progress and start in on it?

If the answer is No or Kinda or even Maybe Someday, get rid of it. If you’re like, “I wanna start in on this now!’ you keep it.

All your ideas just go in one long document or one paper notebook. Don’t worry about organization or categories. Just put everything in one place where you can go through it all later if you want. Which you probably won’t. Which is why we won’t blow time organizing.

The advantage here is that your ideas are still available to you, but they’re not at your fingertips. You’d have to look through this trash pile to find any good nuggets. Some people sleep better knowing those ideas are tucked away somewhere, and keeping them a hot mess will stop you from dipping back in unless it’s absolutely necessary. Ever onward, chums.

I’ve never seen this one tried. Which is why you should be first.

If organization is your thing, I’d propose a pretty simple system:

Maybe you go by amount of work it’ll take to finish: Idea on a napkin, rough drafts, semi-passable drafts.

Put everything in buckets. Everything. No floating stuff, no exceptions. Make a lot of buckets if you have to.

If you’ve got paper, use large folders or envelopes or the classic 3-ring binder. If you’re digital, you can figure it out.

The advantage here is you put in the work now and create a system for future sortation. If you create a system of buckets, it’s easier to move things around in the future, putting everything in the correct bucket before you get a huge pile of nonsense going.

The other option moving forward— have one “bucket” where all the scraps and ideas go for later sorting. Then you can do a massive sort on a regular basis, moving everything from your scrap bucket into the proper buckets.

The other good thing is you can always do this sorting in front of the TV. It’s mindless work. Netflix has a great variety of trashy dating shows right now.

Take all your ideas, look through them, and put them in order by most to least exciting for you. Then toss everything that’s not in the top 10%.

You’re going to have so many ideas and things you want to write it’ll be a miracle if you get to 10% of them. Do yourself a favor and toss anything that doesn’t blow your balls off.

I’ve never seen this one tried. Which is why you should be first.

Sell all your scraps and ideas. Just sell it as a bunch of unfinished scraps on eBay, all in one lot. Maybe you didn’t form them into novels, but that doesn’t mean you can’t make a couple bucks. And getting a couple bucks takes some of the sting out of it all. Sure, it’s hard to part with your items, but when you’re buying a sixer that same night with the profits, you’ll see the genius here.

Actually simple but useful tips, I have to say. But actual apartment cleaning is also important for my writing inspiration and emop is a great service for that. Sweeping the porch is an important as cleaning up your work.

Sometimes appalling shadows will show up in a pushed photograph. For instance, when taking a depiction motorized photograph there are irritating shadings on the thing's face. I have got lab report writing service uk for help in research paper. The explanation behind such shadings is that the camera checks the including light and sets the presentation as necessities are.