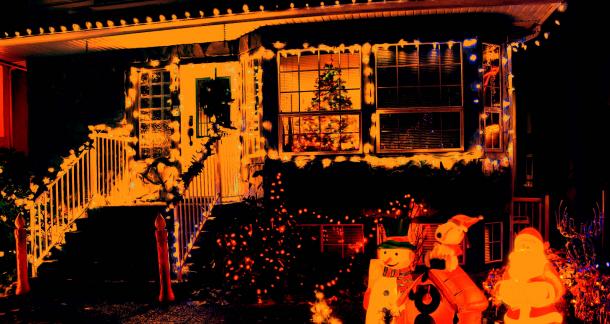 My mom had this artsy friend who did the best holidays.

On Easter, she’d host these massive egg hunts at her house. The eggs were always gorgeous, marbled with layers of waves of color. Usually by the end of the night, she’d be too drunk to remember where she’d stashed all the eggs, her handwritten map disappeared, and dozens of colorful eggs would stay outside until they rotted enough that she could sniff them out.

On 4th of July she’d drive up to Wyoming and load up the trunk with so many fireworks that her car could be classified as an IED.

And on Christmas, we’d grab the newspaper, plot out a path past the houses listed as having the best Christmas decorations, and spend the evening driving. At each house we’d have to rub the fog off the inside of the windows to get a look. My mom’s friend always scouted out the best houses, the brightest displays, and the hidden gems.

This year, I want to play the role of my mom’s artsy friend and take you on a tour of the brightest, best shining lights that are our small presses.

Also, the first time I was ever drunk was at this artsy friend’s house. I was a child. I got into some hot cocoa that tasted funny, and I passed out on the floor. This is your invitation to grab a stiff drink because this is another Christmas-themed list, so you might need it. 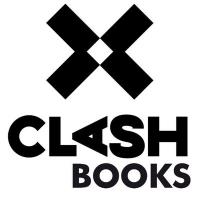 There was this old guy, famous in town because every Christmas he packed his yard with homemade, hand-painted wooden character cutouts from every kid’s movie ever made. I mean EVERY kid’s movie. You’d go the year Toy Story came out, boom, you’ve got Woody and Buzz. You go when Monsters Inc. was new, boom, Mike and Sully. The real beauty was he didn’t get rid of the old ones, just crammed them in next to the new ones until his yard was so bright and full you could spend hours sitting and looking. If there wasn’t a huge line of cars behind you, that is, and there was ALWAYS a line of cars. It was eclectic, but the guy’s personal style and handmade touches brought it all together, not to mention that he had no qualms about grabbing Disney’s copyrighted characters and telling The Mouse to go fuck himself.

Like that old man, Clash has an aesthetic, but it’s not one you can pin down easily. Instead of having a narrow idea of the sorts of books they publish, you’ll see all sorts of different things coming from them, and somehow it all fits. Each year is a new discovery, and alongside everything they’ve published up to now, the catalog is beautiful, defies tidiness, and it’s bursting with energy.

Preorder The Pussy Detective by DuVay Knox. Why? Because Blaxploitation Bizarro sounds can't-miss, and having the word "Pussy" in the title might limit its exposure. But I can say it all I want because LitReactor isn't for total dweebs.

11:11 is publishing short stories and Feral Angels by Peter Christopher in 2022. Call it The Ghost of Small Press Future.

Peter Christopher is a forgotten gem of minimalism, a student of Gordon Lish and close personal friend of Tom Spanbauer (he’s the Pete acknowledged at the beginning of Tom’s novel I Loved You More). His books have been out of print WAY too long.

11:11 is like this house close to my elementary school. They had this big evergreen tree, and they wrapped lights around it perfectly. The lights, those old-school, soft color bulbs, were pushed in deep enough that you weren’t just staring at naked bulbs, and instead you got this glow effect that would be haunting if it wasn’t so pretty. 11:11 Press has a catalog like that. It’s challenging, it’s not the biggest spotlight on the block, but when you take the time to appreciate it, you’re blown away.

Gordon Lish is such an important figure, and his last book, Death and So Forth, put out by Dzanc, kind of came and went without nearly enough fanfare.

Dzanc is like that one house that decorates every year, does an incredible job, and doesn’t get the credit it deserves for hitting solid triples year after year after year. It always looks great, you’ll never catch them with a burned-out bulb, and the track record is undeniable.

Get Death and So Forth at Dzanc Books

The Fainting Game (And Other Stories) is meant to be read and enjoyed with the images it brings to mind, not images on a screen, not with another person. It comes with a prescriptive way to read it, and I like that. I don’t like a book that tells you how to feel, but a book that’s fucking with the way we read is welcome.

There was this house we used to stop by, and they set up a shortwave AM radio station. They’d put up a board with directions on how to tune in, what the playlist was, and how long it took to repeat. It was more than just strings of lights, it was an experience. The Fainting Game is like that. 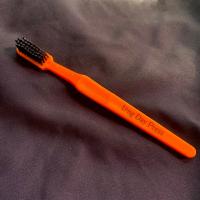 They sell a branded toothbrush. There’s nothing I like more than a “Why the fuck not?" aesthetic. The whole fun of a small press is that you can do things because damn it, you feel like it.

One year somebody walked over the the frozen lake near our house, making tracks in the snow, which ended up being an enormous, lake-length dick, complete with balls. It was the talk of the town, and the real genius of it came later when the city didn't wipe it out or remove it because technically the lake was NOT safe to walk on, the ice being too thin. So it sat out there undisturbed for months.

Never assume that just because it looks chaotic and weird that it doesn't require artistic talent. And the weirdest art requires the heftiest portion of guts.

Tough Poets specializes in shining up underappreciated gems, like the work of Russel Edson.

My mom was a single mom, and one year she put up a string of lights on the house, and she didn't take them down. We sort of forgot about them until I got the idea to turn them on for my brother's birthday. In late June. That second life of those lights was way better than the first. I say we all give our Christmas lights a second whirl sometime this year. Let's call it late June.

Get Ceremonies in Bachelor Space by Russell Edson at Bookshop 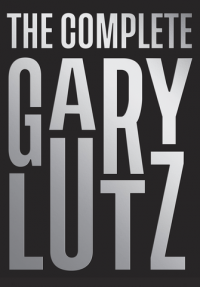 I saw this house this year where they had a full-size German Shepherd statue, wreath around its neck like a collar, Santa hat, the whole bit. Someone had turned the statue, so instead of facing away from the house, the dog was angled mostly towards the house so the people who lived inside could enjoy it. I love the idea that someone decorated that dog, was like, “Why should everyone else get to enjoy this?” and turned it so they could see it from inside.

Get The Complete Gary Lutz by Gary Lutz from Tyrant Books

High & Dry is a book that shouldn’t work. I should hate it. It’s a memoir where a guy mostly recounts his alcohol abuse. If I described it to you, it’d sound like a 70’s I Hope They Serve Beer In Hell. But it’s so much better, it works, it’s funny and it’s sad.

We found this house last year, and they had those light projector things that you stake in the yard. I hate those. But they'd aimed the different lights up at a huge, naked tree, and the projector lit up the different branches with swirling colors and pulsing light and dark. I shouldn't have liked a projector-based display, but somehow, it worked.

Get High & Dry by Stephen M. Park directly from University of Hell Press 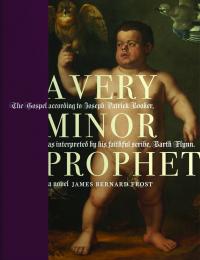 Hawthorne is that house in the fancy, literary neighborhood you feel a little weird about driving past, but you have to because their light display is so elegant. The surprise comes when you drive by on Christmas Eve, and they’re in the driveway handing out styrofoam cups of hot chocolate. Because they're kind, real people.

A Very Minor Prophet is a must-read for everyone, but especially for anyone who misses the Portland of 20 or 30 years ago and maybe feels like they’ll never see it or touch it again.

Get A Very Minor Prophet directly from Hawthorne Books

One of my favorite Christmas light tour stops is this freaky animatronic Santa that’s on some dude’s porch. It’s not too far from my house. Less than one playthrough of “All I Want for Christmas Is You” and you’re watching this full-size Santabot jerking and gyrating so hard that it looks a couple hip swivels away from dancing itself to pieces.

The Santa is set on a covered front porch, and there are no lights on him or around him. He’s this shadow, thrashing non-stop in the darkness. The first time I saw him, I thought he was an actual human dude out there dancing his ass off to music only he could hear. It's just the oddest, most hilarious thing. Why does someone own this? Why do they put it out there in total darkness?

Kennydale feels like that to me. Their offerings are strange and unusual, but they grow into something you look forward to year after year. They've become a personal favorite, the can't-miss publisher. Swartzwelder's dancing to the music only he can hear, and the product of that dancing is some of the funniest shit you'll ever read.

Bookshots: ‘The Guild Of Saint Cooper’ By Shya Scanlon

Bookshots: 'The Suicide of Claire Bishop' by Carmiel Banasky