Six Lessons I Learned Co-Writing A Novella With James Patterson 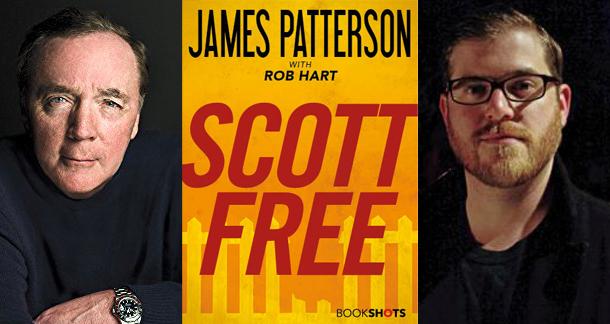 I was very excited when BookShots got a splashy announcement in the New York Times—because it meant I could finally share some news I had been sitting on for months: I was writing one.

Scott Free is out today, as an eBook and an audiobook. It’s very different from my usual work, from the high-profile nature of the gig, to the sheer mechanics. I write in first-person present following one character, whereas this is third-person past following multiple POVs. It was a huge challenge. Bigger than I thought it would be, as you'll soon find out...

Here’s the blurb for the story:

We know you did it--and you won't get away with it.

Accused of murdering three small children, Thomas Scott is released on bail. He faces devastated parents plotting revenge and a fiery detective taking the law into his own hands. But did he do it? The truth will blow you away.

To mark the release, I wanted to share some of the lessons I learned in the course of co-writing Scott Free.

I got this gig because of an editor who works at Patterson’s publishing house. We met at a conference years ago. We’d see each other at events or meet up for the occasional coffee. One day we were catching up and he said, “Hey, we’ve got this project coming up you might be a good fit for…”

Patterson nixed that—he said that analogies like that need to be familiar to the reader, and no one knows what it feels like to get hit with a cannonball.

And of course, like most things, I filed it away as something that sounded great but would probably never happen. But when I followed up, he asked me to send over some material.

This is not to say that my friendship with him was in the interest of getting a write-for-hire gig. He’s a nice guy. But a lot of publishing is networking—getting out in the world, shaking hands, introducing yourself. It’s a good thing to do. You never know where it could lead.

I need an outline to write a novel. I can’t wing it. Hell, sometimes I outline my short stories. But my outlines tend to be messy, and I veer off them a good bit. With Scott Free, I needed to provide a much more precise set of material to get the gig.

My audition, after some initial spitballing about the overall arc of the story, was to put together a synopsis, and a chapter-by-chapter outline of the whole thing, to serve as a starting point. Which was equally difficult (and important) because I was swapping the point-of-view between multiple characters.

Point is: A lot of people complain that a synopsis is a pain in the ass to write. But once you get into the world of pitching, they’re a necessity.

3. Your feelings matter less than the job

I wrote the first chunk of Scott Free and sent it in and gave myself a high-five and proclaimed, “Yeah, I nailed that.” The response I got back was pretty much: “This isn’t working.” I was gutted by that. I thought I did a good job, and probably spent most of that day sulking.

But then I took Patterson’s notes, buckled down, and figured out how to make the whole thing work.

Given a little time, I was able to see it. The cracks in the seams. The stuff that wasn’t working. And I realized that as much as I wanted to pay respect to my own voice and passion, I had been hired to do a job. It forced me to think more in terms of mechanics: How a story is put together. How plot and character interact. I feel like I came out of Scott Free with a shiny new toolbox, and a new appreciation for pacing and structure.

4. Think about your analogies

This is just a great bit of nuts-and-bolts advice: At the opening of the story, I had a character get tackled by someone, and describe it as being hit in the gut with a cannonball. Patterson nixed that—he said that analogies like that need to be familiar to the reader, and no one knows what it feels like to get hit with a cannonball.

It’s not something I ever thought about, but it makes a ton of sense.

It’s one of the hallmarks of Patterson’s prose: Short chapters. I’m not a short chapter guy. I tend to favor longer chapters with a lot of breaks in them, and then working toward a page-turning climax. In fact, I had this habit of wanting all my chapters to be roughly the same size, which would cause me no end of consternation if I found one was too long or too short.

But then I realized: So what? Chapters should only be as long as they need to be. I’m leaning into this with my next Ash McKenna novel, Potter’s Field. There are some shorter chapters, and rather than feeling the need to beef them up, I’m letting them be.

This is all to say: At the end of the day, it’s your book, and you can do whatever you want with it. Co-writing with Patterson taught me to reexamine and reevaluate the choices I make as a writer.

I got spoiled by Polis Books. Since it’s a smaller operation, things tend to move quickly. I’ll be submitting my next novel to them around the end of November, and it’ll hit in July 2018. So that’s roughly eight months later? I submitted my final draft of Scott Free on April 4, 2016. A year and six months. It’s also a third the length of one of my regular novels and there’s no print edition. But those big publishing wheels move slowly. Which is not a bad thing. It's just different.

Now, it's been so long, I’m looking forward to reading the novella again...

So perhaps a more pressing question: what was it like writing for an author that's really two people, with you being a third author?

Also I seem to have the opposite problem you have. I struggle to get chapters beyond four or so pages. I often have to combine chapters in the editing process. So the fact you have enough meat to prune down is nothing to be ashamed about.

(I also never got the appeal of Patterson's work, but that's a topic for another day.)