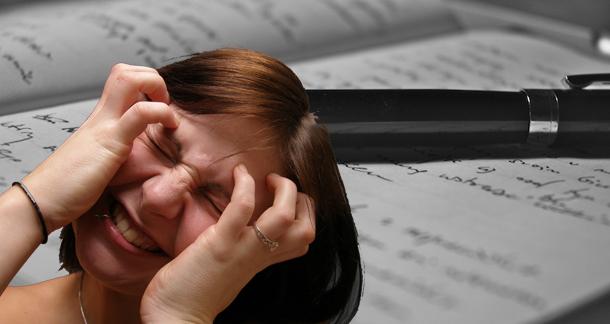 Established by the Academy of American Poets in 1996, NPM features events and programs that encourage the media and the public to pay attention to the art of poetry. So pay attention, for God’s sake! Sign up to get a poem-a-day in your email, carry a poem in your pocket on April 18, play Exquisite Corpse, watch a poetry-related movie, visit a poetry landmark, or try your hand at one of these six types of poems to spur your creativity. If you haven’t written a poem since your high school English class, you might be surprised by how much playing around with words in new ways can inspire your prose. Poetry... good and good for you!

The word “epistle” may sound religious, but it is actually just another term for a letter. An epistolary poem is any poem that takes the form of correspondence. There aren’t any requirements for meter or rhyming schemes, though rhyming couplets are fairly common, and epistles can be as informal as you’d like. They can be directed at a person, a location (for a modern lyrical example, look to LCD Soundsystem’s “New York, I Love You But You’re Bringing Me Down”), the world at large, even an emotion (“Dear Fury…”).

Why you should try it: Because of the personal, intimate nature of letters, writing to one of your characters (from either yourself or from another character), to your setting, or to an object in your story can unleash all sorts of fresh ideas. Entire novels—Dracula for example—have been written as epistles. Besides, when’s the last time you sat down and wrote a letter?

An acrostic poem is a poem in which the first letter of each line spells a word or phrase, often the subject of the work. Like so:

In the more challenging double-acrostic, the last letters of each line also spell either the same word or the second half of a word or phrase.

Why you should try it: Though acrostic poetry has been popular since medieval times, writing an acrostic poem still feels like a third-grade school project that should have macaroni and pipe cleaners glued to it. But that’s what makes it so much fun. Anyone can do it and constraining yourself in this way can help you think of your subject in terms you otherwise might not have considered.

Example: Lewis Carroll’s poem "Through The Looking Glass," in which the first letters of each line spell Alice’s full name: Alice Pleasance Liddell.

This modern form was created by poet Afaa M. Weaver during an African-American poetry organization’s retreat. There aren’t any rules about rhyming, stressed and unstressed syllables or line length. All you need to remember is that there are three stanzas, each one followed by the same refrain. The first, a six-line stanza, presents a problem. The second, an eight-line stanza, gives more details. The third, a six line-stanza, resolves the issue or explains why it wasn't resolved.

Why you should try it: The Bop is not only fun to say, it’s a great exercise to help inspire a solution to a problem facing one of your characters.

“Cento” means “patchwork” in Latin and it is just that, a poem made by stitching together lines from other poems—a poetry collage of sorts. Typically, only one line is taken from any given poem, so if you’re playing along at home, don’t just take “A Dream Within A Dream,” slap on the last line of “The Road Not Taken,” and call it a day. The purpose is to play with words. Try unexpected combinations of styles and phrases to get the most out of it.

A cento is part of a broader form known as “found” poetry, in which poets use any sort of existing text—anything from graffiti, spam messages, and Hamburger Helper ads to letters, poetry, and magazine articles—to create new works by adding, deleting, or reordering words.

Why you should try it: It’s a less daunting format for newbie poets when compared to sonnets, odes, and the like. Plus, reading works in a variety of styles and formats is always inspiring.

Examples: "To A Waterfowl" by John Ashbery is a cento. T.S. Eliot’s "The Waste Land" is a found poem featuring lines and phrases from hundreds of other texts.

The Latin savvy among you have already figured out that this poem has five lines. What goes in those five lines is subject to more rules than a Catholic girls’ school. The number of syllables are, in order, 2, 4, 6, 8, 2. The number of stresses in each line goes 1, 2, 3, 4, 1. That’s the most straightforward way of looking at it. There are various options for rhyming schemes (ababb, abaab, abccb, etc.) and even a series of variations from butterfly cinquain (a nine-line version) to a Garland cinquain (six cinquains in a row where the last one is made up of one line from each of the first five). Let’s keep it simple though. If you want to give this one a try, there is a website that holds your hand through the process. It’ll save you some time. I’ll save you even more time by not sharing the train wreck I created when I tried my hand at it. Yours will be better.

Why you should try it: Starting with an object, describing it and a few actions associated with it is a surprisingly fast, easy way to kick writers block in the face.

If the word “ballad” makes you think of cheesy eighties love songs (“Hello? Is it me you’re looking for?”), you’re not far off. The original ballads were stories put into song form to help medieval Europeans pass on oral histories. Ballads have a repeated refrain (“I can feel it coming in the air tonight, oh lord.”), but unlike today’s radio ballads, which tend to focus on love and sexy times, traditional ballads described political drama, farming trends, social issues, tragic deaths, love stories, or any other occurrence that was worthy of preservation. They’re usually written in four-line stanzas, but the form is less important than the narrative. By the sixteenth century, poets started putting ballads into written form and selling them on broadsheets. By the twentieth century, the form had evolved into “Stairway To Heaven”-style compositions. Progress?

Why you should try it: The ballad’s focus on narrative makes it a useful brainstorming activity for short stories. As a bonus, it is a useful tool to woo hotties if you sing it to a smooth R&B beat.

If you've already got expert mastery of poetic meter, rhythm, and rhyme, you could always kick out a villanelle, sonnet, sestina, or rondeau; any type of word play will jar you out of a rut. But for most of us, these short, simple exercises will do the trick. If you decide to try one or more of these exercises, why not post it in the comments? Did you find that it helped your prose or gave you new ideas? Let us know.

I ran across this article and it could not be more apropos:

Dwayne from Cincinnati, Ohio (suburbs) is reading books that rotate to often to keep this updated April 5, 2013 - 3:20am

I think if you average out the quality of soft pretzels vs. poems, pretzels come out way ahead.

My biggest blocks tend to come from issues in life that I haven't processed. I've found that poetry, even if I'm not planning to do anything with it, can help me see things from a different viewpoint, and sometimes help me break away from whatever rut I've gotten myself into. Thank you for the style suggestions. :)