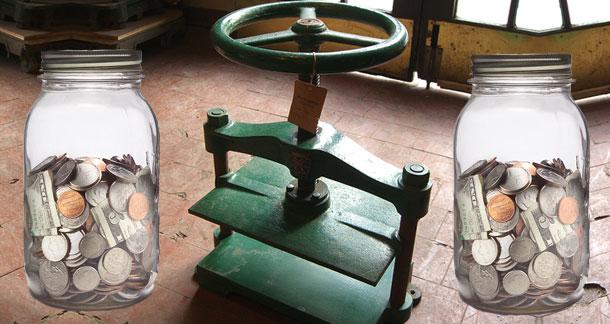 When you complete your novel there are a few directions you can go.  There's the self-publishing route, although more than a few remain firm in their convictions to go "legitimate" in their endeavors.  You can get an agent to query the big publishing houses, but this often proves to be difficult as it yields many rejections.  That's more or less when the idea of the small press comes up.  You don't need an agent since you can contact them directly, however, there are some things you might want to keep in mind while shopping.

You'll Get No Advance

Granted, you're not having to pay anything up front to see your work in print, but you're also not getting anything, either.  That sort of sticks you in the middle ground of things, and you shouldn't be surprised by this.  The stigma of small presses mostly lies in the tiny stature of their bottom line, so unfortunately things like author advances are usually going to be the initial corner that gets cut in the publishing process.  The traditional move here is that they give you a higher royalty rate to offset that.  Still, even a small advance of a few hundred dollars would be a nice act of faith on their end.

Editing on a Budget

Another corner cut.  The big boys like Random House and DoubleDay have the best editors in the biz.  Small presses...eh, not so much.  As you're probably aware, the traditional book edit consists of a content and line edit.  Since small presses don't have much money to work with, don't be surprised if you only get the latter.  A lot of small presses will hire a bargain basement freelance editor to comb through your manuscript, but the regularity with which you see errors in these books is a little bit disconcerting.  A great way to know if a small press has a good line editor or not is to read one of their releases.  If it's full of typos and grammatical flubs, then that's probably what you're going to get.

Cover Art on a Budget

I know we'd like to live in a society where we actually don't judge books by their cover, but the fact of the matter is that we do and it's easy to see which ones were handled on the cheap.  Again, it's another corner cut.  Small presses just don't have a lot of money to throw at an art department, so what you end up with is rinky-dink cover art that sometimes doesn't even relate to the book.  If you're considering querying a particular small press, make sure to browse through their catalogue and see how the other books turned out.

Hope you've got some good contacts because you're going to need 'em.  First of all, if you're hoping to get some name author to personally endorse you with a cover blurb--don't count on the publisher for this.  That's right, it's your responsibility to find one willing vouch for you.  Hope that's not too much of a shocker because it gets better.

Regarding ARCs (advanced reader copies), the publisher will compile their list and ask for a list from you.  They'll send these out along with a cover letter explaining who they are, who you are, what the book is about, etc.  Now here's the problem: places like Bookslut and HTML Giant and any other name reviewer you can list off--they're swamped with this shit, so just because they get it doesn't mean they're going to read it.  Having said that, if they don't know you or the publisher, they're even less likely to look at it.  Again, you need to make some contacts.  A new author on a new/small press is likely to get thrown to the wayside.

Few things are as pleasing as being able to walk into a Barnes & Noble, going to your particular aisle, and seeing your title sitting right alongside all the other pros.  Unfortunately, on a small press, that's probably not in the cards.  There's three factors to consider.

1.) There's only so much space.  The "Big 6" and all their titles--those are getting on the shelves first, then the big indies like Melville House and Hawthorne.  Since small press is nearly the bottom of the barrel, there's simply not enough space for you.

2.) The second part is that your book is probably print-on-demand.  Again, this sort of goes back to how much money the press has to spend on the cost of book printing.  POD is the best option for them because they're only paying to print what they sell, so they're certainly not going to pay a bunch of money just to put your book in stores considering it hasn't sold.  That's too much up-front cost for them.

3.) Lastly, there's the issue of book returnability.  I won't bore you with the details, but this is basically an agreement between the book store and the publisher that if the book doesn't sell, the store can send it back.  This set up costs money though, so again, we're back to that tiny bottom line I've been referring to.

Considering you didn't get an advance, don't count on anything much in the way of a marketing budget.  Oh, there might be some, but it's going to be skimpy.  Again, that damn bottom line is going to relegate you to places like Twitter, Tumblr, and Facebook--yeah, all the places you've been hitting.  Web ads and anything in print (the paper, magazines, etc.), I wouldn't count on it.  There's also no book tour, no release party.  If you want to do these things, it's on your shoulders and your wallet.

What we have here isn't the case of all small presses, but most small presses.  The more you shop, the more variation you're going to see in what they've got to offer.  It's entirely possible that they have a fantastic in-house designer or that the publisher has an in with a New York Times book reviewer.  Hell, you might even get offered a small advance.  The point of the column is for you to be mindful of these things before you sign anything.  A great many authors have been so excited that they were being offered a contract that they didn't consider these issues until it was too late.  Don't be one of them.

If you feel your edit is shoddy, bring this to their attention.  If the typesetting is wrong, say something.  Don't be so quick to get into print that you brush over these glaring issues.  Also remember that a contract isn't final until it's signed.  You, the author, always withhold the right to try and negotiate anything from royalties to author copies.  Never take a person at their word.  It's only binding if it's in print and signed.

Lastly, and probably most importantly, signing with a small press means your work has just begun.  You're not going to be able to kick your feet up and wait for the money to roll in.  You will have to be involved in nearly every step: editing, marketing, promotion, etc.  You'll have to set up your own readings and be responsible for whoring your book out online.  The limitations of the small press, like their budget, are on the short-end of things.  This is your reality check, and yeah, maybe some of this stuff comes off disappointing, but better to have it brought to your attention now than after you've done something you can't undo.

Be smart, authors.  Publishing is a business.  Channel your inner Gordon Gekko and be business-minded.

Which small press did you visit to take a picture of their production line?

Can you pick your own cover art if you have your own artist/photographer? I realize it will be a lot of work because I'm putting together an antho right now but I think its worth the experience to learn how it all works. I don't expect to get rich but creating more publishing credits is important as a writer. Plus the networking and making possible future contacts. Did you have any say over the cover art for your book or did they make you pick from a few choices?

One of the good things about small presses is that they're quite flexible in what they'll let you do.  I personally didn't like the work of the in-house cover artist, so I hired my own people to do it for me.

Caleb J. Ross, one of my labelmates, designed his own cover too.

Can you pick your own cover art if you have your own artist/photographer?

It depends on the publisher. The vast majority will allow it (unless they're unhappy with the art that you choose). I know at least one case with a small press publisher where she disliked the cover art that the press had come up with for her book, provided them with better cover art (and it actually was much better), and they refused to go along with her wishes. Nevertheless, small presses are much more likely to allow the author to choose the cover art than larger presses.

Excuse me while I rant and fart here.

I have to point out that not all of this is accurate:

1.) POD is not a factor when bookstores buy. There are "big 6" publishers using that printing option right now and you would never even know it. Anything under 5, 000 units is not coming from a warehouse, but straight off the line. Especially if the title is a back list one. Folks need to get over the idea of POD as a bad thing. The craftsmanship of the design and writing within should be the big thing to look at and not whether it was printed in batches.

2.) CO-OP money is the biggest factor (besides knowing the buyer--which is huge). Publishers buy spots for their books. They spend a lot of money. This is why there are large numbers of certain books and only a few rag and tag ones in a big box store.

3.) Discounts: A publisher needs to have a discount of 49% or higher for B&N to bite. If a publisher has their books sold through a wholesaler it is nearly the same. A 20% discount is called a short discount and most stores will not even take a look at that item.

EDITING and other shit:

All the "big 6" farm duties out. There are no more departments filled with In-House editors/proofers/copy-editors. Errors happen no matter what name is on the copyright page. We are in an age where publishing as we knew it is changing fast. The rules of old are dried up and turning to dust. Flush it gone and move on.

If you think you're gonna have a smooth ride with a "big 6" publisher you have another thing coming. Unless you are a writer who shits gold, you are nothing but another product to be stamped, injected and moved down the line.

Small Press bleed with each book. They are in the trenches with the writers. It's about passion and not commerce.