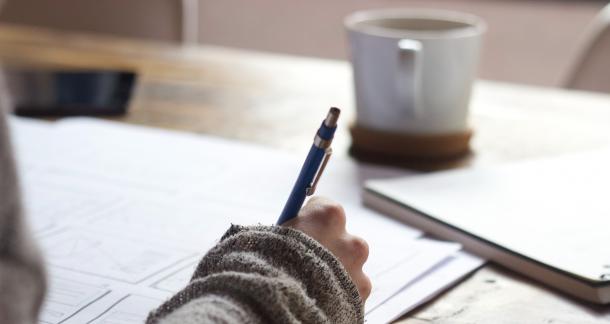 I used to have very little time asked of me. What I mean is that there was not much that bombarded me with demands. When I was younger, there was school, the drama of my parents and friends. But as an only child, I always had time to myself. I spent hours in my room writing or painting or reading. When I hit my teens, I wrote poetry inside of notebooks and brought the poems to school to show my friends. I passed the notebooks around, looking for approval. I posted the poems to my Diaryland and Livejournal, connected with other young writers, writers who introduced me to Radiohead and Bikini Kill and snorting Vicodin for fun. I began a life on the internet— a life in words. I turned to it when I felt my worst. When I got broken up with or rejected, when I was processing conflict with my friends or parents, when I developed an eating disorder and struggled with my self-esteem. It was a place for me to go where I felt someone could hear me. In this way, words became a way for me to cope.

But was the writing therapy?

Therapy has wide-ranging definitions that can be both extremely simple — “a treatment intended to heal or relieve a disorder” — or incredibly complex, depending on what we choose to include under the umbrella of “therapy.” Such as: does it help you form more positive thinking patterns? Does it instill confidence and feelings of capability in the self? Does it cure or treat addiction? Does it help one weather particularly intense periods of life? Does it help one manage a mental disorder?

T Kira Madden would say that writing is not therapy. In her Lit Hub essay, “Against Catharsis,” Madden states eloquently the difference between journaling, which can be a therapeutic tool, versus the artistic, thoughtful and elegant arrangement of language to create something that effectively moves another human being. For her, she states, this does not render what has been painful into painless. It is not healing, she says.

“To render the art, to render the experience, does not, in my practice, involve 'bleeding into the typewriter.' It does not entail a writer spilling or spewing the memory onto a blank page, nailing it down, healing. Why not? Because that is literally impossible, and, while I can appreciate the romance of such proposals, the hypothetical possibility of this would not make for effective or moving literature.”

She also mentions the act of memory recall— how the brain pathways towards memory are different from the pathways used to verbalize said information. How, each time you tell it, the memory could change altogether, creating a brand new memory. In 2010, neuroscientist Daniela Schiller published a paper in Nature magazine which indicated the ability of memories to be reshaped every time they were recalled. Schiller’s research proposed that if information about the event was introduced in a particular window of time, or the context was somehow altered, right after its recall, the emotional experience of the event could be changed.

Couldn’t this mean that writing can heal?

In his 2012 essay in The New York Times, Steve Almond argues this. He states that writing is therapy, or rather that the writing workshop has proliferated in our society, in part, because people are hungry for the focused self-inquiry that writing as a practice can provide. He states,

“The official job of a workshop is to help a writer improve her prose, not her psyche. But this task almost always involves a direct engagement with her inner life, as well as a demand for greater empathy and disclosure. These goals are fundamentally therapeutic.”

I have never done well with therapy. At sixteen, I began to self-harm. I came to my mother one night telling her that I felt suicidal. She took me to a woman whose office was in a remodeled Victorian house in the center of town, a soft room with dull lighting and grey carpeting. I sat in her large, leather chair, slumped down like the letter L, too afraid to remove even my coat and scarf during the entire session. After a couple of sessions, I became too afraid to discuss my issues with food, something I was desperate to hold on to. She encouraged me to journal, though, and I kept up with it for years. In college, I attempted, again to seek help after a string of sexual assaults, but then stopped after a few sessions with a grad student whom I didn’t connect with. Maybe if I had continued, I would have found it useful. I know therapy works for friends who have connected well with their therapists.

Even after all of the positive things I acquire in the pursuit of this goal, there’s still a churning undercurrent of distress. I’m not sure if I’ve been made better by this process.

My last attempt was in my mid-20s when I was working to unravel some issues that felt like depression. I went once a week for two months, and then my insurance ran up, and nothing felt better. I left the person I was living with to live alone for the first time in my life, relapsed into my eating disorder and began to self-harm again. But something changed. That year I attended a writing workshop for the first time, and began to take my writing more seriously. I began to see writing less as a journal and more as a craft.

There are many things asked of my time now. Today, I am still an only child, but I am also a mother of a young child, an employee, a spouse, a constant student, a devoted friend. I have since recovered, gotten back with the person I left, made better boundaries for myself, dealt with the feeling of suicidal ideation on an almost-constant basis, gotten new jobs, left jobs, been laid off from jobs, gotten married, had a child, moved across the country in search of a way to lessen the bad feelings. Through all of that, I threw myself more seriously, maybe obsessively, into forming this desire to write into a craft.

It has helped. I must prioritize my writing time, make clear boundaries against interruptions, against the demands of adult life. I must consistently practice a type of positive self-talk in order to work through and complete long projects. I must come back to the same idea, over and over again, sharpen my focus, ask myself why, what I am hoping to express, and skate past self-doubt in order to continue writing. I must learn to silence the inner critic, and keep moving even when I hate everything I’m doing. I also— and this is important— must maintain my head. I need to be able to think clearly. And in order to think clearly I need to eat, I need to take care of myself.

When I first gave birth, I had the fear that perhaps many women have about having a child: that I would never be alone again. That I wouldn’t have time for the self-inquiry that writing provides. The things that some of my peers had told me— well, you can forget about creativity. I had to give up all my creative pursuits for years.

One lesson I’ve learned from fiction is that we can create our own narratives. Maybe it feels like this is something we can only do in our writing, but I think it can be true for life, as well. I didn’t want to believe what my peers had said, or the fears that media and society posited about motherhood and identity. I wanted to believe that I would— and could— continue to write. I was scared to lose something I felt I needed to hold on to so badly.

Madden discusses the artistic work still required to transmute an event into an object worthy of being shared and digested by others. “We are essentially only recalling the last time the story was told,” Madden says in her essay. And that simple change doesn’t mean the initial painful moment has been transformed. In 2013, Schiller told MIT Technology Review, that while you may access and change the emotional memory, “you don’t affect the content. You still remember perfectly.”

For a time after birth, my ability to be creative did change. The change was chaotic and disorienting. Breastfeeding hormones and the fog of consistent sleep deprivation made my mind work differently, I felt less sharp than before. The fear settled in, I became depressed, I worried bad habits would come back. But instead of lamenting about it, perhaps out of the fear of loss, I started a project I told no one else about, something completely different than anything I’d worked on before. I set a goal to finish it before I showed anyone. I set my lap top up on the kitchen table and wrote whenever I had five or fifteen minutes. I wrote during naps. I wrote when everyone else was asleep and my thoughts were allowed to unfurl, openly, without anyone asking anything of me.

If we use any definition to ask the question: is writing therapy? The answer isn’t simple to me. Writing can be a therapeutic tool, yes. Writing, with the goal of getting published, of participating in the landscape of literature, is something I need. But even after all of the positive things I acquire in the pursuit of this goal, there’s still a churning undercurrent of distress. I’m not sure if I’ve been made better by this process. Out of fear, I kept myself sane through writing. Out of fear, I didn’t give up my creativity. The space inside my head to think. It was me, saying to myself “these are my needs. My needs are to write, every day, no matter what.” I pursued that without apology.

Some days I didn’t write and I forgave myself for it and continued on to the next day, and the next. I did this until I hit my goal. And I kept going. I cordoned off a space inside me that belonged to no one else. When I get to write, I feel okay. In the single moment between myself and the keyboard, I feel good. I don’t have to question it.

The Importance of Journaling

Putting in the Time: How Taking Creative Control Helps All Aspects of My Life