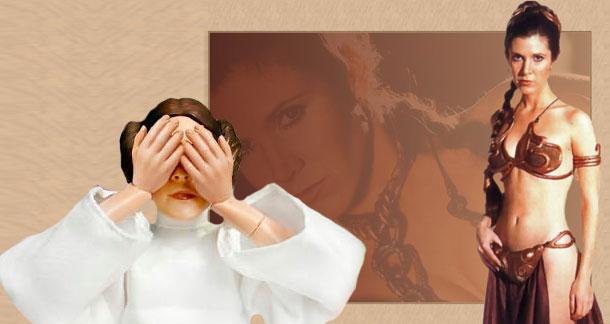 Carrie Fisher on her latest memoir:

Bad news for anyone who thought that Carrie Fisher had stopped talking about herself: Sorry, but after all of her seemingly endless blathering on about her nose-bleed-high-class problems, it appears she has yet another brand-new problem to overshare about (though don’t expect to relate to it). This time, the electro-convulsive-shock therapy she’s been regularly undergoing is threatening to wipe out (what’s left of) her memory.

Shockaholic is Fisher’s last ditch effort to hang on to a few juicy tidbits of her life. She describes the book as “An anecdotal memoir of a potentially more than partial amnesiac. Remembrances of things in the process of passing."

This thing is as juicy as it gets. Fisher casually drops revealing anecdotes about Ted Kennedy, Michael Jackson, and Elizabeth Taylor, and she never seems to hold back or embellish. She simply recounts the alien world of celebrity through her nonchalant and forthright voice. Fisher is wryly self-deprecating about her own well-documented emotional and mental problems (“…with my particular combination of poor judgment and recklessness, it could be seen as being a very good impression of suicidal.”), her dependence on drugs (“Now I am not a stupid person. I’m a fairly intelligent person who does stupid things. Incredibly stupid things.”), and her celebrity-fostered ego (“...no wonder she’s mentally ill. She’s got herself on her mind ten, fifteen, twenty hours a day! It never ends.”). Fisher is witty and gossipy and fun, but the quality that radiates most warmly through the prose is her honesty.

Star Wars  changed the story of Carrie Fisher, even though Fisher herself still isn’t certain of what that story truly is.

She discusses waking up alongside her best friend, Greg Stevens, who had passed away some time during the night. Media outlets never failed to refer to him as “gay Republican political operative” Greg Stevens, and through Fisher’s grief and Oxycontin-induced haze, she began to believe she was haunted by “Greg’s gay Republican political operative ghost.” She talks about losing custody of her daughter after her Oxycontin addiction spun out of control, and the immense grief and self-destruction she suffered as she went on her award-winning Wishful Drinking tour. She describes becoming the unofficial vigil-keeper of loved ones’ death beds, always the person who stays until the end when others cannot, easing the passage from one dimension into another. She plainly expresses her regret that she was not there when her father died, after taking care of him for several years and growing close to him for the first time in her life.

Despite the candid retelling of some of the most heartbreaking moments of Fisher's life, Shockaholic is never short on levity. Fisher cheerfully recounts a verbal sparring match she had with Ted Kennedy on a double date in 1985—a match that she decidedly won. She tells the story of the time her ex-step-mother Elizabeth Taylor pushed her into a pool as retribution for some tacky comments made by Fisher at a gala, and how that act created a bond of friendship between the two women that lasted until Taylor’s death this year. She gives a hilarious glimpse into the all-over dubious presentation of her step-father, bilious shoe tycoon Harry Karl. She offers startling insight into the strange universe of Michael Jackson, and her own theories on how it all degenerated so quickly. She includes intensely personal photos with delightfully incongruous captions. A photo of Michael Jackson reading Wishful Drinking is captioned, “President Harry Truman playing golf on the island of Kailua, Hawaii. June 1911.” A picture of Fisher hugging her errant father Eddie is captioned, “Carrie Fisher and Eddie Fisher, blissfully unaware that the marriage of Norwegian president Sven Migdorf would collapse within hours.”

Fisher even talks a bit about her iconic role as Princess Leia in Star Wars, a topic on which she is famously reticent. She discusses the way the immense popularity of the series transformed her world forever, despite the fact that she’d been around fame her entire life. Star Wars changed the story of Carrie Fisher, even though Fisher herself still isn’t certain of what that story truly is:

What you’ll have of me after I journey to that great Death Star in the sky is an extremely accomplished daughter, a few books, and a picture of a stern-looking girl wearing some kind of metal bikini, lounging on a giant drooling squid, behind a newscaster informing you of the passing of Princess Leia after a long battle with her head.

But inbetween all the hilarity, gossip, and self-deprecation is the incredibly honest, tender tale of Fisher’s reunion with her father, Eddie Fisher. She discusses their lifelong estrangement until the day that he became ill and needed her, and the ease with which she stepped into the role of care-giver. She never sugar-coats the man, flawed as he was, but she openly loves and accepts him, grateful for the bond they shared before he died last September. “My love for my dad was always more like longing, and it retains that quality, only now it can never be relieved. But in the end, finally, it doesn’t have to be, because before it was too late, he was mine at last.”

Shockaholic is a breeze to read: fast-paced and clever, funny enough to make you laugh aloud, and short enough to be read in one sitting. But the moments of insight, of clarity, of vulnerability that Fisher shares with the reader in her characteristically straightforward manner remain long after the last lovely bon mot.

Joshua Chaplinsky from New York is reading a lot more during the quarantine November 6, 2011 - 8:43am

Nice review, Meredith. I saw Fisher's Wishful Drinking HBO special and found it moderately amusing. She discusses a few of the things you mention being in Shockaholic.