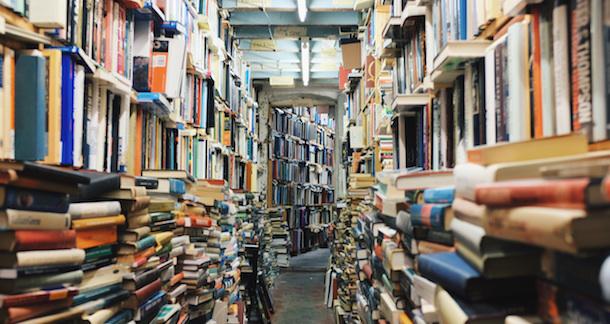 Your first novel has just been accepted for publication. Congratulations! You're living the dream.

But if your big debut is being brought out by a small press—as opposed to a big New York publishing house—you may be in for a rude awakening.

That's the position I found myself in this spring when I realized just how much of the publicity for my debut novel, Hot Season, I was going to have to handle myself.

If you find yourself in the same position, you'll want to do all the things that book publicity and book promotion experts recommend to spread the word (e.g., sending ARCs out to reviewers and book bloggers, running Goodreads giveaways, and being active on social media). But remember, everybody else is doing those things as well.

So if you are not faint of heart—or long on personal modesty—here are a few additional, out-of-the-box ideas you might want to consider.

In a world increasingly inundated by advertisements and other not-so-subtle commercial come ons, we've become wary of anything that looks like a traditional ad buy.

In a world increasingly inundated by advertisements and other not-so-subtle commercial come ons, we've become wary of anything that looks like a traditional ad buy.

That's why everyone from the scrappiest start-up to the biggest brands now seek to leverage the power of influencers, and what that means, basically, is this: When someone who's at least somewhat famous likes your stuff, other people are more likely to like your stuff as well.

When professional book publicists sit down with new clients, they often ask the author to make a list of any and everyone they know who has a following, literary or otherwise, and then reach out to the people on that list, offering them a free book in exchange for virtually any sort of online mention, be it a tweet, Facebook post, or Instagram pic (never mind an actual endorsement or review).

Though you might not think you know famous people, when you consider the definition of "influencer" above, chances are, you probably do. But here's the catch—I have it on good authority that in order for this strategy to work, you have to actually make personal contact with your designated influencers, whether it's over coffee or at a reading. Also, you actually have to make it clear, in no uncertain terms, what you're offering and what you're asking for in return.

Do you have the cojones to email that author you met at a conference and ask if they'd like to have coffee sometime? And then hit them up for a mention, in return for a free copy of your book? If so, DO IT.

Tim Grahl is the author of Your First 1,000 Copies: The Step-by-Step Guide to Marketing Your Book, which is one of the books on marketing that I've found the most useful. He's also the author of "How to Launch Your Book with At Least 25 Reviews" (yes, I dropped the + from the title of this article, because I'm an editor and it's redundant).

In it, Grahl reports having asked an Amazon employee what the most helpful thing is that an author can do to "improve conversions on their book page" (that's marketing speak for "convincing the people who visit your book page to actually buy the damn book"). Her reply: "By far, the most important thing an author can do is get more customer reviews."

Some people believe the magic number of reviews, in terms of Amazon's algorithms for increased visibility, is 50. Others believe that 20 is "the magic minimum threshold that every author should aim for." Regardless, it's generally agreed that more is better, and the sooner your book can amass customer reviews in the double digits, the better.

Grahl recommends offering a free copy of your book to anyone you know who will commit to publishing their review on the very day that it launches—and then (nicely!) reminding them of their commitment at regular intervals leading up to pub day (and especially the day before and day of).

And if you think that sort of ask will take gumption on your part, consider this: Grahl recommends lining up 75 or more people who've made the commitment to posting a review of your book on opening day, because less than half of them actually will.

3. Use Endorsements—Whether or Not They're for Your Book

If you happen to know famous authors well, you probably hit them up to blurb your book. But if you've attended creative writing conferences and workshops—or happen to have an MFA—there may be some authors you don't know well enough to ask such a thing of who have, nevertheless, already read some of your work.

This happened to be the case for me with Jess Walter, author of the #1 New York Times best-seller Beautiful Ruins. Though Jess taught in my MFA program, I never got a chance to work with him, so I didn't feel comfortable hitting him up to blurb my book (plus, I know everyone who's ever actually worked with the guy is hitting him up as well).

But, well—he did happen to read a short story of mine (coming out this fall in Forest Avenue Press's anthology of Portland-based speculative ficiton, City of Weird). And he did happen to say that he thought it was "terrific." So, of course, I had to ask if he'd mind my using that quote in promoting my book. "Sure," he said, "hope it helps."

So that, of course, led to this: 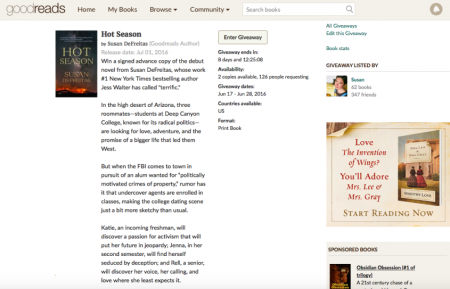 Shameless? Absolutely. But over 600 entries on my first Goodreads giveaway--and 240 adds to users' To Be Read shelf—doesn't seem so bad for a debut novel from an unknown author.

Sure, when you pitched your novel, you probably struggled to come up with comparable titles, or comps, which publishers like to use as a marketing tool.  But chances are, you can rattle off four or five authors whose work you're passionate about and who've helped to inspire your work—without even giving it that much thought.

To my mind, people who like the same authors I do—which include people like Ed Abbey, Tom Robbins, Monica Drake, and Lydia Millett—are more likely to like my work as well, despite the fact that none of the books these people have written can really, from a marketing standpoint, be considered "comps."

Which is why you will see me blogging, writing, tweeting, and otherwise sharing info about these idols of mine and others like them in the months to come. That may be shameless as well, but I don't see it that way; I'm happy to have an opportunity to talk about the work of authors I love, and if doing so helps to create a context for my own work, so much the better.

There is most likely at least one author you hit up to blurb your book who didn't bite, for one reason or another. After all, you were asking for something, and the more famous an author is, the more likely it is that he or she will say no.

But what if you were to offer them something instead? Say, an interview in a literary review or magazine, just in time to promote their latest book.

I'm not ashamed to admit that, after one of my s-heroes (graciously) declined to blurb my book, I offered her just that (after pitching a contact at a magazine on an interview with her). I will, after all, be swinging through her city on my book tour...she told me sure, drop her a line when I'm in town.

If and when that interview is published, people who like one of my favorite author's work will hear at least a little about mine as well. (Plus, I'll have an excuse to talk to her.)

All of these strategies require a certain amount of brazenness, sure. But if you want your small-press debut to get noticed in a big, big world, they may be worth your while.

What are some other out-of-the box book marketing strategies you're interested in—or have used to publicize your own work? I'd love to hear your thoughts in the comments below.

GREAT ARTICLE!!! I will put your advice to use with my next book, which is actually a new edition of an old book - ON SUNSET BOULEVARD: THE LIFE AND TIMES OF BILLY WILDER - which was originally published by a big house but is being reissued by the University Press of Mississippi. I think that much of the burden of publicizing it will fall on me.

I will have to do all these things. Much more tactful than my original idea of spraypainting the cover of the book on every city that I visit in an attempt of viral marketing. I grew up in the punk DIY scene so it's all I know. These are actually useful ideas.

Joshua Chaplinsky from New York is reading a lot more during the quarantine July 11, 2016 - 5:13am

Great stuff. I leveraged the influence of fandom for my book KANYE WEST—REANIMATOR by getting the producer of the Reanimator film, Brian Yuzna, to post about it on social media. Still struggling to reach 20 Amazon reviews. Wish I had worked on that before the book was released, like you suggested.