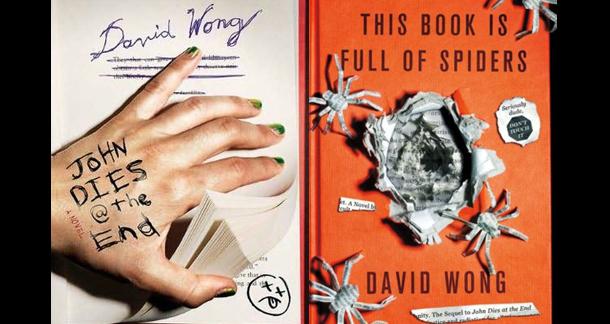 You know how sometimes when you're drifting off to sleep you feel that jolt, like you were falling and caught yourself at the last second? It's nothing to be concerned about - it's usually just the parasite adjusting its grip.

John Dies at the End, a horror novel by Cracked.com editor Jason Pargin written under the pseudonym David Wong, was first published as a webserial in 2001, before it was released six years later in paperback form. It’s a hilarious, incisive parody of horror and paranormal mystery tropes and an earnest examination of friendship in the face of dread.

It’s also a bit rambly and overstuffed. Messy, even.

I love John Dies at the End. I frequently laughed aloud as I read it, and I found the book almost entirely riveting. I love all of the wonderfully precise and deliciously weird characters, particularly the core few. Dave is the protagonist, the author’s surrogate, a self-deprecating everydude with a tough past and a surprisingly game outlook in the face of apocalypse. John is his best friend, a gleeful chemical abuser and overconfident con man who takes everything in stride. Amy is a sweet, quiet girl they knew from high school who lost her hand and parents in a car accident and proves to be a perfect fit for Dave and John’s bizarre friendship. Molly is Amy’s dog, found by Dave, an eerily prescient Irish rust dog. And Dr. Albert Marconi is a renowned paranormal investigator, occultist and former priest.

John and Dave live in a town in Illinois they simply refer to as “Undisclosed,” where nefarious experiments by powerful, shadowy figures result in rips in the fabric of the universe through which all manner of interdimensional horrors appear. At first John and Dave are blissfully oblivious, until they partake of a street drug called Soy Sauce that appears to be extraterrestrial in nature. Their perspectives are changed forever, and they are soon able to see every particular of the blight upon Undisclosed. They become low-rent ghostbusters and help Amy out of a supernatural bind, with the assistance of Dr. Marconi.

It seems pretty straightforward, and it is, as well as wildly entertaining and memorable. But the book's serial origins hamper it a bit. Action scenes go on pages and pages too long, grotesque descriptions last entire chapters. The thread of the narrative gets lost at times, although we’re always brought back by Dave’s wry and earthy commentary.

In October 2012, the long-awaited sequel This Book is Full of Spiders: Seriously Dude, Don’t Touch It was released, and to this reader’s eye, everything that didn’t work in John Dies at the End is tidied up and resolved here. Part of the improvement is due simply to the fact that This Book is Full of Spiders was written as a manuscript, always with the intention of being published as one complete book. The action clips along briskly, the narrative never wanders and the reader is left wanting more instead of less.

But there’s more to This Book is Full of Spiders’ success. Dave is something of an unreliable narrator – he’s sarcastic and misanthropic, so his account of events can’t always be trusted. But more importantly he’s very critical of himself, so in fact disgusted with himself, that in John Dies at the End we can’t help but feel a bit disgusted with him as well. After all, that’s the only version of Dave we’ve ever seen.

In This Book is Full of Spiders, Wong alternates narration between Dave, John, Amy and at times even Molly (who, to my delight, thinks of her owner as Meatsmell for obvious reasons). This helps us to determine the exact nature of events, taking into account all points of view, but it also helps us to realize how great Dave really is. Seen through the eyes of the people (and dog) who love him, we suddenly understand that Dave can be truly brave and generous. Dave still doesn’t see himself that way, but now we know better.

This Book is Full of Spiders also offers a more focused, and therefore more frightening, threat. John Dies at the End has a bunch of smaller conflicts, with monsters and splatter scenes scattered throughout willy-nilly. This Book is Full of Spiders has one central menace, and - you guessed it! – it's spiders. Space spiders. Space spiders that burrow into the heads of their human hosts and create a city full of murderous zombies.

Yes, Wong’s sequel is a brilliant send-up of the zombie obsession in modern horror, and it works with beautiful, razor-fine precision. A group of college-aged zombie dorks are overjoyed that their silly apocalypse preparations weren’t for naught – until shit well and truly hits the fan. A mysterious government agency arrives, quarantines are sanctioned, aerial strikes are threatened. And with chapter titles like “90 Minutes Prior to Outbreak,” “10 Minutes Prior to Outbreak,” “3 Hours, 30 Minutes Until the Massacre at Ffirth Asylum,” “125 Minutes Until the Massacre at Ffirth Asylum” and “2 Hours, 20 Minutes Until the Aerial Bombing of Undisclosed,” the stakes are sky-high and the pace feels like nothing so much as a relentlessly ticking clock.

All of our favorite characters from the first book return here, and we're also introduced to a kick-ass new character, Detective Lance Falconer, who proves to be as utterly rad as his name implies. As John describes him, “Falconer was wearing his street clothes – jeans, a black turtleneck and an empty shoulder holster under his armpit. Cowboy boots. Little bit of beard stubble. John wondered if the guy would walk from one end of the street to the other without winding up covered in bitches.”

So yeah, there’s a bit of bro speak, but you’ll find that both John Dies and Spiders have a surprising amount of heart and wisdom behind the blood and bravado. Amy’s an incredible character, courageous and loyal and brilliant, a huge Narnia and Lord of the Rings nerd, and John and Dave are both fully aware of how superior she is to them, and they're both completely devoted to her. It's sweet.

Don Coscarelli directed a terrific cult-blast adaptation of John Dies at the End last year, and I’d love to see him tackle the more svelte and successful This Book is Full of Spiders. You can easily read the sequel without knowing anything about its predecessor, as Wong catches the reader up in moments and then darts ahead to this wholly autonomous new narrative, but dammit, read both of them. Wong’s created a singular universe that proves essential to lovers of horror, hilarity and great writing.

I was really dissapointed with the movie. The third act was just so typical compared to the rest of the film. Forgive me tho, for not yet diving into the books. I will, eventually.

Just started reading John Dies at the End earlier this week.It's... odd. But I like it. Hope I continue to do so, as having a sequel will make it easier to pick the book I read when this one's done.

The first book is pretty sweet. I watched the movie, it was decent, and I still need to read the second book which I will probably buy.