Seeing Past The Clouds: A Kent Haruf Primer 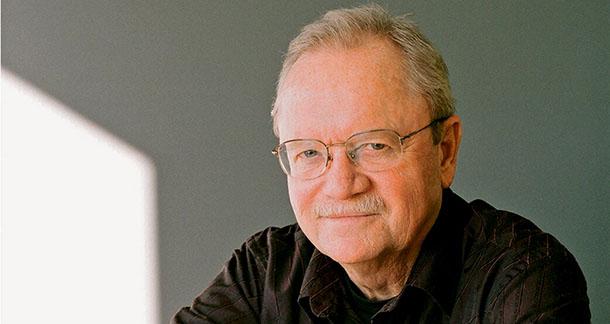 Before I get started, this column is really just as much one reader’s remembrance as it is a primer on a writer’s small, but indelible body of work.

I started reading Kent Haruf around the same time everyone else did, when Plainsong hit bookstores back in 1999. At the time, I was one of those readers who rejected anything that I deemed “mainstream”. (Of course, what I was reading back then was just as mainstream as anything else on the New York Times bestseller list, it’s just that it was old and held no relevance to modern literature, and was read primarily by young people who think they’re being unique.) So as the mainstream and literary press were going bugshit over Plainsong, I was rejecting it and judging it solely by the critical write-ups it was receiving.

But my mom—who really had no idea what I was reading, she just knew that I liked to read—sent me a copy of Plainsong because she had read it, enjoyed it, and wanted to pass it along to her bookish son. I put it in the to-be-read pile with no intention of actually reading it and thought I would probably trade it in at Bookman’s in Mesa, AZ.  But for one reason or another (mostly, I believe, because my mom kept asking if I'd read it yet), Plainsong never made it into the trade pile, and I ended up taking it with me to the 24-hour gas station I was working at.

There was nothing flashy or gimmicky about 'Plainsong'. There were no big reveals. It contained big ideas about simple, everyday people and the small tragedies that complicate their lives.

On my first reading, I tore through the novel during my shift. Haruf’s spare, straight forward prose transported me to the biter cold of Holt, Colorado and engulfed me in the brooding loneliness of Guthrie and his sons; the feelings of confusion and abandonment of Victoria Roubideaux; in the awkward kindnesses of the McPheron brothers; and the wisdom and humor of Maggie Jones who changes the lives of all of them. There was nothing flashy or gimmicky about Plainsong. There were no big reveals. It contained big ideas about simple, everyday people and the small tragedies that complicate their lives.

Over the years, I’ve re-read Plainsong three times. None of my re-readings have been as frantic as the first time. Instead, I read it a few pages at a time and slowly absorb Haruf’s sentences. Plainsong is one of those books that always manages to sneak out of my house somehow (another one like this is Sherman Alexie’s The Lone Ranger and Tonto Fist Fight in Heaven), either because I lend it to a friend and they never give it back, or it simply slips into someone’s pocket or purse and I end up having to re-buy it. And I don’t mind this, because Plainsong—and all of Haruf’s novels, really—is one of those novels you want people to discover and enjoy, and so what if I have to buy yet another copy?

Kent Haruf was born in Pueblo, Colorado and was the son of a Methodist minister. (When you read Haruf, you will experience the Methodist influence. Nothing preachy, but more of an awe and fear of the natural world.) Like most writers, Haruf held dozens of different jobs all across the American west. But above all else, his obsession was writing and becoming a novelist. After Graduating from Nebraska Wesleyan University, Haruf became obsessed with attending the Iowa Writer’s Workshop at the University of Iowa. He faced several years of rejection, but the University of Iowa’s admissions board finally relented when they found out that Haruf had moved his family to Iowa City just in case he was accepted to the program.

Haruf published his first novel, The Tie That Binds in 1984 and received a Whiting Foundation Award and a special citation from the Hemingway/PEN foundation. His second novel, Where You Once Belonged was published in 1990. Despite the critical success of both novels, Haruf had few readers and supported himself and his family as a professor at Southern Illinois University in Carbondale, Illinois. It wasn’t until the success of Plainsong (which along with becoming a huge bestseller was also nominated for the National Book Award) in 1999 that Haruf was able to retire and delicate himself full-time to writing. The sequel to Plainsong, Eventide, followed in 2004, and Benediction was published in 2013 and was nominated for the inaugural Folio Prize.

Haruf died on November 30, 2014, but managed to complete his final novel, Our Souls at Night, before succumbing to interstitial lung disease.

The Tie That Binds

I’m a big believer in when you first start reading a major novelist, you should start at the beginning so you can chart their progress as a storyteller. Also, The Tie That Binds is an elegantly crafted novel that’s equal parts Midwestern gothic and story of the sacrifices we make for the sake of family. The Tie That Binds vibes like Hemingway if he had embraced his Midwestern roots as opposed to his European influences.

My personal favorite of Haruf’s, Benediction feels like his most personal and autobiographical novel. As with all of his novels, Benediction takes place in the fictional Holt, Colorado, and is the story of the life and death of store owner Dad Lewis. As Dad lays dying of a rare and aggressive form of cancer, he reflects on his long and productive life surrounded by his loving wife and daughter, and pines for his son who he lost due to his own stubbornness. Most of Haruf’s stories are real tear jerkers, but Benediction grabs you at your core and wrings you dry.

If you’ve never read Haruf, Plainsong is a fine place to start. The characters are recognizable and oddly comforting despite their tumultuous lives. What’s most unique about Plainsong is the easiness of the novel. Haruf’s voice feels truly alive and unburdened by the stylistic, polished underpinnings of his first two novels. Simply put, Plainsong feels like the novel Haruf was meant to write. I will say that there are times when the plot of Plainsong feels a bit formulaic (this is also the case of its sequel, Eventide), but you can’t help but forgive it because of the overall beauty and simplicity of his writing.

Steven Schwartz from Chicago is reading The Fever by Megan Abbott January 9, 2015 - 11:32am