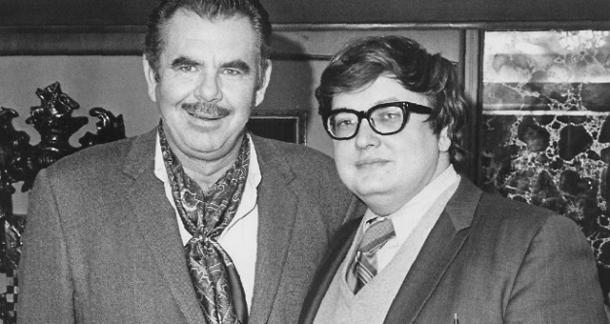 Roger Ebert’s death at the age of 70 sparks a number of questions, none of which I am prepared to answer: What was Ebert’s impact on American culture? Was he a great critic? Will his criticism stand the test of time? Will anyone still care what he wrote ten years from now?

To all those questions, I must answer – I dunno.

What I can say is that I am saddened by his passing, though I rarely sought his opinion of any film I cared to see. I rarely seek any critic’s opinion on the films I see; I fashion myself as good a film critic as anyone out there, and frankly I don’t care what anyone else thinks.

But Roger Ebert occupied a particularly central position in American letters. He was by far the most famous film reviewer in the country, if not the world. And on the whole, his taste in movies was pretty damn good. He was far and away better – more sophisticated, funnier, smarter - than his partner on television, the late Gene Siskel. Siskel was strictly middlebrow. He was impressed by the kind of high-minded “important” pictures that come and go without making any kind of dent in the art form. If Siskel liked something, I was usually fairly sure I’d detest it.

But Ebert was something of an oddball in that despite his enormous audience, he wasn’t afraid to like something that was really and truly terrible. He once told an interviewer that he liked both the very good and the very bad and didn’t care much for the stuff in between. That’s my idea of a great critic. He found pleasure in the rotten, value in the schlock. He went to the movies because they were fun, and while he certainly respected fine filmmaking, he wasn’t averse to encouraging his readers and viewers to find pleasure in the nasty and the cheesy - the chance-taking failures that Siskel derided.

Beyond his criticism, Ebert will forever hold a place in my heart for his screenplay for Beyond the Valley of the Dolls, which was directed by the magnificent Russ Meyer. Big tits were to Meyer what deep focus was to Orson Welles. That Ebert saw the value in Meyer – enough to collaborate with him – is proof of the impressive taste Ebert brought to bear on the films he reviewed. One of my film professors once described Meyer as “the master of the meaningless cut.” Ebert, I am sure, would know exactly what my prof meant by that. He clearly appreciated Meyer’s talent in a way Siskel never could.

As half of the TV duo, Ebert was partly responsible for that scourge of criticism known as “thumbs up/thumbs down.” It’s crass shorthand for something infinitely more complex. But he made up for it by giving a whole range of lowbrow movies thumbs up. He encouraged people to see as many movies as possible, to find pleasure in unexpected places. God love him for that.

Rest in peace, Mr. Ebert. May heaven turn out to be a plush screening room with an unlimited film library.

How Harlan Ellison's 'Watching' Predicted Film Twitter, or Why Film Criticism Will Save the World

Nobody wants to talk about this because it's uncomfortable, but it's pretty telling... The strongest ost passionate sentiments I heard people say aloud when the news of Roger Ebert's passing came yesterday went something like:

"Ebert had a black wife?"

"Roger Ebert was married to a black lady?"

But then everything that was actually written was written about what a great critic he was, etc.

It's these spoken sentiments that social media self-censors that keep the medium less honest than it proclaims to be,

Personally, I found it interesting that Roger Ebert was actually married (I always assumed his love for Gene Siskel would never lose its flame) than the fact that he was married to a successful black lawyer.

Courtney from the Midwest is reading Monkey: A Journey to the West and a thousand college textbooks April 6, 2013 - 4:23pm

Actually, I knew he was married to a black woman long before he died because I was an ardent fan of his Twitter feed. I mean, I guess some people were shocked, but I don't think the people who got into him after the Siskel pairing would. (If I were alive during their time, I was too young to know what movies were.)

edsikov from New York by way of Natrona Hts PA is reading absolutely nothing April 7, 2013 - 8:19am

I knew nothing of Ebert's personal life and don't feel any great shock upon learning that he had an African-American wife.  What's the big deal? What's shocking to me is that his wife had a white husband.

If you'd like a taste of Ebert writing something other than movie reviews you've got to read his "interview" of Lee Marvin. Unlike most interviews of today, Ebert keeps himself out of the interview and simply observes the goings ons of a drunken, lazy day with Marvin and his household. You would think Lee Marvin would have been upset at this portrayal, but it's my understanding that he actually liked the piece. Mr. Ebert had a very broad writing style. He will be missed.