Revisiting Old Works-in-Progress: 5 Ways to Make the Most Out of It 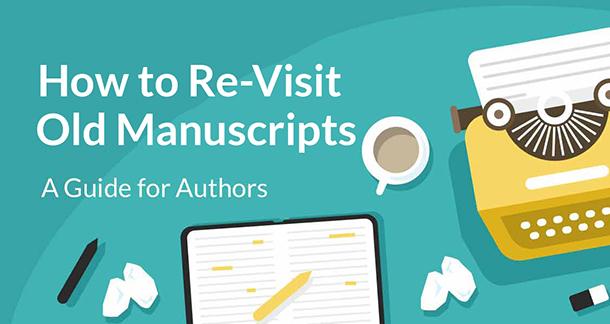 Everyone knows Neil Gaiman, the author of Sandman, Stardust, and the now TV-famous Good Omens. And everyone should know the writing tip that he once famously gave to aspiring writers: “The best advice I can give on this is, once it's done, to put it away until you can read it with new eyes. Finish the short story, print it out, then put it in a drawer and write other things. When you're ready, pick it up and read it, as if you've never read it before. If there are things you aren't satisfied with as a reader, go in and fix them as a writer: that's revision.”

Easy enough to do, you might think. But what if you set your story aside for so long that you move onto another story — and forget about the old one? Until, that is, you randomly stumble across it one day years down the line and think to yourself, oh, I kind of remember writing this.

Convenient or not, this kind of situation happens to many a writer. But just because a story is old doesn’t automatically mean that it’s terrible. With a bit of work, it might even turn into something that you can publish, or submit to a writing contest. Here are five tips on how to make the most of it. Hopefully, this post can help prepare you for the moment when you revisit an old manuscript — which is not unlike greeting an old friend again.

1. Resist the urge to edit on your first read-through

Your first instinct may be to eagerly race through your manuscript like the Terminator: cutting up paragraphs here, flaying word choices there, and bringing out the big guns to wreak havoc on your past authorial decisions. As fun as this might sound, it’s pretty counter-productive to your purposes, as this kind of approach is too granular to get you (or your story) anywhere useful.

What would be a better tactic is to identify the big and overarching problems with the manuscript first. Why is the pace off? What went wrong with the character development? Why does the theme not have the impact that you intended? Now that you have the requisite distance from the story because of time you spent apart from it, spotting such issues should come much easier.

In other words: approach the manuscript like a developmental editor would. It'll leave you with a story that’s clearer, stronger, and altogether better off for it.

2. Learn the art of rewriting

Here’s a piece of writing advice that you might hate me for. But it’s true, so don’t hate the messenger. Sometimes it’s better to rewrite chapters or even the entire manuscript, and not edit.

Rewriting forces you to evaluate every word of your previous draft — in contrast to a mere edit, where you’re inevitably going to let things slide. When you edit, you might think to yourself, “Oh, this scene is good enough. I can skip it.” Or you might tweak a paragraph halfheartedly and then immediately move onto the next. This tactic is especially effective if you’re revisiting an older work, as your writing style might have evolved since you last worked on it, and simple editing may not make the cut anymore.

Don't think about a rewrite as if you're starting from scratch. After all, you have your old draft as a starting point — now you're just thoroughly remodeling it. All of this to say: give rewriting a try — you’d be amazed at how different (and better) the result will be.

3. Notice the flaws in your writing

Speaking of editing and rewriting, you might, as you go through your old manuscript, pick up on some of the tics that inevitably creep into your writing. It might be anything from overuse of certain words (such as “just,” “really,” “very”) to a reliance on certain gestures and expressions (such as eye-rolling, staring, grimacing, or blushing).

That’s okay. Since this is an old story, you might have outgrown many of these bad writing habits by now. You might even smile to yourself when you see what kind of a writer you were before!

That said, don’t just nod and move blithely on — instead, it’s always helpful to actively notice these earlier flaws. Not because you want to be masochistic about it, but because this will come in handy for your future writing endeavors. If you acknowledge them and work on eliminating them once and for all from your writing, you can save yourself a round of exhausting editing in the future.

If you picture a landfill, you’ll likely imagine a landscape that’s covered in rubbish, dirt, and broken glass. But there’s valuable “waste” in there as well, like antique electronic goods — hence the existence of treasure hunters who visit landfills to mine them for buried wealth.

A story (in any shape) is much more monumental than a landfill. But the idea here is similar: if you’ve read through your manuscript and decided that you don’t want to stick with it, you’d be surprised at how much you can still garner from it. You might, for instance, come across a scene in your old story that is well-written, creative, and solidly executed. Don’t leave it to languish in a dead-end narrative — pluck it to use in a future book of yours.

5. Don’t be afraid to kill the darling

That said, some old stories might be unsalvageable. Perhaps your writing has changed too much — or perhaps your ideas have flown in the opposite direction since you first wrote it. If this is the case, don’t be afraid to set your old story aside forever. Otherwise, you might risk wasting time trying to fix something that’s unfixable when you could be spending your resources writing a different book entirely.

Finally, don’t be discouraged if this is what ends up happening! At the very least, it’s a nostalgic trip down memory lane — and a chance to see how much you’ve grown as an author.