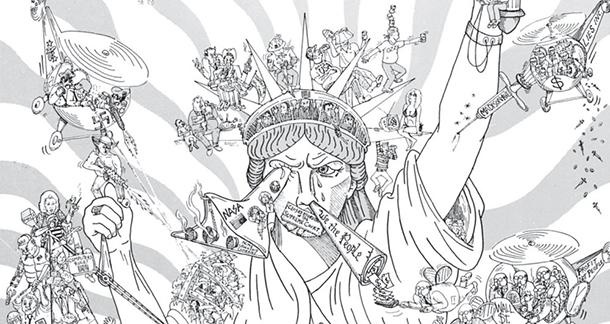 I grew up during the Reagan administration.

For a lot of you, this little statement probably doesn’t evoke any kind of emotion. Chances are, you either weren’t born yet, or you were so young you have zero memory of the guy.

But for me, the mere mention of the dude sends a chill down my spine.

Around the Rawson house, mentioning Reagan was like evoking the name of the devil and there was good reason for my family’s blinding hate. During the long eight years of its reign, the Reagan administration managed to collapse the economy three times, sold guns to drug dealers, completely ignored the AIDS epidemic (which, in turn, killed millions), they deregulated the economy, dismantled unions and entire industries (most notably the U.S. steel industry), and introduced the word trillion to the U.S. vernacular. Because even though the Reagan administration experienced the longest stretch of peace in the ENTIRE history of the United States, they spent money on defense like we were fighting three or four wars.

Facebook, Twitter, all of it is a useless waste of time... You are not making a difference.

And, oh yeah, they most likely introduced crack cocaine to the American people, too.

On top of all of this, my generation lived in near constant fear of nuclear holocaust. Most of us were absolutely convinced that the Russians were going to launch a nuclear strike against the U.S. at any minute and the entire world would be reduced to smoldering ash where only the cockroaches would survive.

The 80’s was a weird, paranoid time to be alive.

But the one bright spot of living in this world of constant fear and loathing was the art that this period inspired. Artists like Jean-Michel Basquiat, Keith Haring, Julian Schnabel, and Robert Mapplethorpe came into prominence. Writers such as Tama Janowitz, Bret Easton Ellis, and Jay McInerney documented the horror and excesses the 80’s inspired. And most importantly, hardcore punk rock gave voice to millions of disenfranchised and incredibly frightened kids. Bands like Black Flag, The Dead Kennedys, The Circle Jerks, Minor Threat and a dozen others defined me socially and politically. It gave voice to the anger I felt over the dismal future, and most importantly, it made me want to create art that was just as angry, aggressive, and politically motivated as it was.

But then something happened.

Suddenly, Reagan wasn’t in power anymore and his vice-president, George H.W. Bush, was, and under his watch, we invaded Iraq for the first time and it was suddenly unpopular to be a politically motivated artist. We suddenly needed to make up for calling soldiers baby killers and spitting on them when they came home from Vietnam (This, of course, never happened. It was nothing but propaganda created by the Nixon administration), we had to support our troops and the poor people of Kuwait. And if you didn’t fall in line with this, you were considered un-American. Then 9/11 came along and gave the government even more clout to fuck over the American people, and we all just took it, we all just looked the other way because the American dream was under attack.

As time passed, the trend of art remaining non-political (particularly literature) continued. Writers decided that you shouldn’t mix politics and art. That we should write stories that were completely divorced from the real world because literature should be escapism; it should be art for the sake of being art. We made the conscious decision to become culturally invisible, irrelevant, and a true reflection of America: apathetic non-participants.

And we remained that way as the forces of hatred, racism, misogyny, and greed gathered influence and those forces gave birth to Trump.

We all thought it was a joke.

We all thought: Who the hell would vote for the male (and far less intelligent) version of Kim Kardashian?

We all took to social media and mocked and scorned, posting article-after-article to our little virtual drum circles, but not doing much of anything other than that.

And now here we are, in less than three weeks President Donald Trump will be sworn into office and all we’re left with the question, what now?

Ever since the election, The Dead Kennedy’s lyrics for “We’ve Got A Bigger Problem Now” keep going through my head.

I am Emperor Ronald Regan
Born again with fascist cravings
Still, you make me president

Welcome to 1984
Are you ready for the Third World War?!?
You too will meet the secret police
They'll draft you and they'll jail your niece

You'll go quietly to boot camp
They'll shoot you dead, make you a man
Don't worry, it's for a cause
Feeding global corporations' claws

Just replace Reagan with Trump and 1984 with 2017, and you’ve got something that may possibly happen to America.

Most importantly, get the fuck off social media. Facebook, Twitter, all of it is a useless waste of time. Because let’s face it, you’ve created a vacuum for yourself and all your little rants and articles, they amount to a hill of shit. They amount to a mountain of likes and retweets from people who agree with everything you’re saying. You are not making a difference. The only thing social media is good for is for private messaging when you’re organizing.

I know no one wants to hear these things. I know you don’t want to get off your ass and disrupt your comfortable existence. But if there has been any time in the history of this great country for writers to step up and make a real difference, it’s now.

It’s time for us to become Orwell, Hemingway, and Hunter S. Thompson.

It’s time to resist, rebel, and repeat until we change this country and make it into a place where all people are truly created equal.

Or don’t do anything, just keep writing your little rants on Facebook, keep playing it safe and be content with being ground under the heels of sub-normal, illiterate jack-offs like Trump.

The choice is yours.

Pretty good Preachin'. So while all of US are getting off our asses, what are YOU going to actually do? Just curious.

I agree with most, but guess what? I wouldn't have read this article if I hadn't seen it on Twitter. And my author page is on Facebook. This is is a good article, but people really need to stop saying that social media is useless. It's not. It's how authors communicate with each other and how we reach more of an audience.

Honestly, how many people would this have reached if not for social media? Isn't this article itself social media?

This is a high horse that we all need to dismount.

Community Manager
helpfulsnowman from Colorado is reading But What If We're Wrong? by Chuck Klosterman December 27, 2016 - 11:01am

Steven Schwartz from Chicago is reading The Fever by Megan Abbott December 27, 2016 - 1:04pm

Best thing you have produced since Scarlet.  Scary times ahead.  Reagan stuff is dead on.  You forgot the Savings and Loan debacle.  Cover up, folks, the shit storm is on its way.

the most important thing to do right now is communicate.

there seems to be a major polarization going on (and not just in the US). I've got my own take on the whats, whys, and wherefores, but the problem is that people from the two sides (and not just over US politics) aren't talking. That has never historically ever been a good thing. It was the first step to the Rwanda genocide.

If you dont' talk with someone, it's easier to become convinced that they are "other." and once that happens, the whole shit show takes over.

It's more important to communicate with the human underneath all the labels, name-calling, partisan lip service, and figure out how much we actually have in common.

Because that election result was a giant "FUCK YOU" from the disenfranchised who've been ignored and marginalized, and it's going to fuck everybody.

Most importantly, it's time to talk to the people around you, and figure out who will have your back, and who won't.

The first week after the election, I was destrought and horrified. Now I've got my Irish up.
I have been saying for the past month that I'm really looking forward to the music that's going to be coming out in the next four years. And I want to contribute to it. I've finally sat down and started writing songs for the first time in 10 years. And I'm getting fucking pissed. At first I was disheartened because I'm having such a hard time finding a drummer and bass player in PORTLAND OF ALL PLACES!!! But now I'm thinking, "fuck it. I'll do it myself."

that's exactly the right attitude we need moving forward. I've been doing so much "fuck it, I'll do it myself" that it's become a really fun game. I keep wanting to include people in my riffing. It's beyond just writing stories, it's something much bigger... More like living life as if one is in a story. You'd be amazed how the world changes. I'm not even the protagonist so much as a protagonist among countless. And the angry yelling people are more like Charlie Brown teachers "wah wah wah".

hollow rhetoric has lost all of its pretense and shows as empty. There's an immense opportunity for us to define the future we want to see (well, it'll be seen after our lifetime, but we'll get to lay out the foundation through our story telling, songs, and especially dance.)