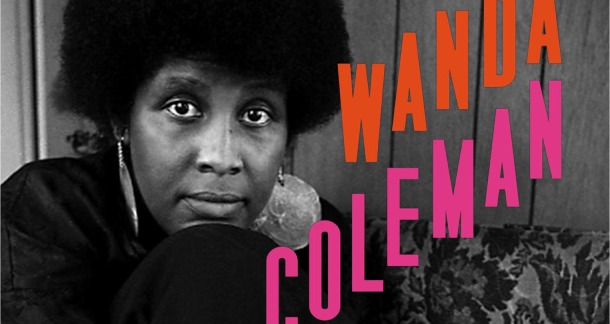 It’s hard to imagine the fierce voice of Wanda Coleman comfortable with the slighted title of The Unofficial Poet Laureate of Los Angeles, but the backhanded relegation was the best CBS could offer when memorializing the trailblazing American poet working entirely on her own terms. She’s been called many things: the L.A. Blueswoman, Mad Dog Black Lady, or “hateful and hilarious, heartbroken and hellbent,” as author/poet Mary Karr described Coleman’s Wicked Enchantment: Selected Poems (Black Sparrow Press, 2020).

No one should put a period at the end of your sentence. No one but you.

— The Way They Feel

Since she was published by the same publisher as Bukowski and Fante, Coleman landed on my radar the same time those personal beacons of mine did. Comparatively, Coleman would blow my brain much farther apart than those two, who gave me mere “comfort.” Hers would be the first voice I would read in such explicit yet rhythmic detail of what it was like to be a black woman in the ghettos of Los Angeles, like being come-hithered into a ciphered language spoken on the other side of the city’s redlined streets.

There’s a kind of poet who works well only in social isolation — in the back of a dense forest, but I’m an urban child, subjected to the kind of psychic isolation one finds in a vast sprawl like L.A. I’ve become a poet under duress — stealing time the way one might steal cars.

— From liner notes of Twin Sisters

Coleman crashed further into my sensibilities when I discovered her split spoken word Twin Sisters LP with Exene Cervenka (of the L.A. band X). Her ferocious style would pair well with L.A.’s punk chanteuse — they both met at Venice Beach’s Beyond Baroque poetry center, which tended to showcase writers overlooked by the literary establishment.

Because they have treated me so nastily I flaunt my thang outrageously… I proceed to put a spotlight on it to make sure my thang is unforgettable. I say how my thang can get so stinky it’ll clear a room in less than a minute if I don’t wash it proper and I cap it off by saying it takes a big thang to do a big thang. They faces turn red. And I point to all their little thangs and laugh till I crack. 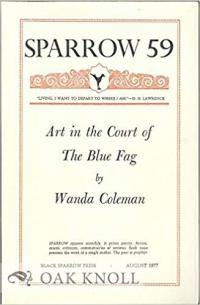 On her side of the record, she comes out swinging with the sextet “Nigger Rhythm Rhymes from the Blues Part of Town,” a piece she calls “jump rope sociology.” Coleman’s delivery here is so confrontational yet unnerving in its sarcastic self-deprecation. An exaggerated, sing-song cadence peppered with profanity, she’s also speaking to us as if we are children — for a POC it may rustle as eye-winking sentimental, but for a white listener she clearly has our racially arrested developments in mind.

By the time Twin Sisters was released in 1985, Coleman had given over two hundred readings at prisons, rock clubs, poetry centers, and universities. Her words would singe the paper it was printed on, yet those same lines would be napalm in the live setting — often a very physical catharsis. Her reading style required a regimented training, “incorporating fasting, ritual — the way a fighter trains for a match or the way one conjures to heal/gain greater focus.”  This disciplined approach could be a subliminal continuum — her father George Scott was not only a boxer, but the sparring partner of Light Heavyweight Champion Archie Moore.

Whether she chose the personal or political, domestic melancholy or municipal folly, Coleman would chronicle the discomfort of the dispossessed; giving a voice the paved-over and steamrolled like no other poet could — because she also possessed the humor, or more specifically, the earned right to wield it. A combination that would let her twist that knife like it was just a longer limb.

Last year Black Sparrow released Wicked Enchantment: Selected Poems — an essential retrospective spanning all of her Black Sparrow releases. The New Yorker called it “the fearless invention of one of L.A.’s greatest poets.” Since it’s a “greatest hits,” it’s a great place to begin for the uninitiated. But my personal favorite is (my autographed copy of) African Sleeping Sickness: Stories and Poems (Black Sparrow Press, 1993). It’s a testament that her best work was still booming all the way into the nineties (the original limited abridged edition of African Sleeping Sickness was released in 1990) and would usher her to her final day on November 22nd, 2013.

legions of her children tear at her breasts and partake of her flesh. they slit her consciousness that may never sleep. she of the night of nights. she conceived without vaginal birth/without woman. unclean. she — the victim of victims.

father, the crucifixion did not take 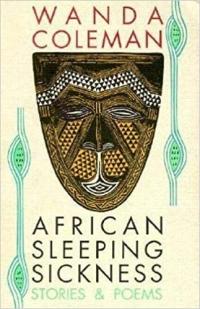 
no blood pools. no semen spills
no rape no murder no needle
this time there’s no chance of schematic mishap/discovery
by friends (nobody evah drops by ‘ceptin’ strays sniffin’ for pussy)


he came down the mountain
with a full growth of beard, smiling
the new MS taut in his mitts…

She watched his hope dance. “That what you went away fo?

it real nice for some poetry.”
“is that all you can say about it?”
“no I could say more”
“well say it — for god’s sake, say it!”
she took off the sanitary napkin she was wearing
and placed it on the page
“needs more blood on it”
and went back into the kitchen

Get Wicked Enchantment at Bookshop or Amazon