Reflections on the Difficulties and Influence of Joyce 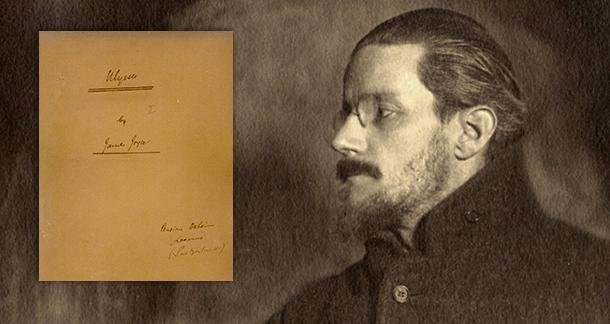 February 2nd is the 137th anniversary of James Joyce’s birth. That’s not a particularly significant number except that it makes me think about how around the 20th anniversary of my own birth I was obsessed with Joyce, and all that has changed over the years about my relationship with the Irishman’s work. Now that I’m staring down 40, I often wonder why I was so enamored with Joyce, whether or not it was all just because I was a pretentious kid, and how it is that after becoming a writer I find that those years of influence are little more than pale shadows on what I do now.

I read Dubliners in high school, A Portrait of the Artist as a Young Man during freshman year of college, and by junior year I had a copy of Ulysses, along with an annotated guide as my summer reading. I was that guy in the Barnes and Noble café, looking back and forth between the two books laid out on my table, sure that I was making better use of time than whomever was next to me despite not knowing what exactly the person next to me was doing.

I wrote my senior thesis on Portrait. My writing samples for MFA programs were hugely inspired by the stream of consciousness in Joyce’s work. I even attended and sat through the entirety of Joyce’s only play, Exiles.

...after becoming a writer I find that those years of influence are little more than pale shadows on what I do now.

That was all when I was young, learning, and had not yet achieved much as a writer. Now I have had a book published that I’m proud of, not to mention a good number of short stories and essays. I also run an MFA program, the alumni of which have found great success. James Joyce’s fingerprints, though, are tough to find on any of those accomplishments.

I regret nothing, because who knows if I would have gotten here having done things differently. But I also don’t stand by a lot of what I did and thought in the years when Joyce dominated a lot of my literary thinking.

One reason for my infatuation with Joyce, which I think comes naturally with youth, is that I wanted to be smarter and wiser than everyone around me and I wanted that right away. How better to achieve that than to understand one of the more notoriously difficult writers in literary history, especially his book that had recently been named the finest ever written in English? Or, to say you understand it. Read pages of annotations and criticism and you can drop enough buzzwords about the Shakespeare, Irish history, and linguistic musicality to convince even a fellow literary mind that you understand Ulysses. I certainly could, probably still can if I’m put to it. At the time, I felt legitimately intellectual when I did so, one of the relative few who could actually make something out of Joyce’s writing. I did not recognize that the fact there were only a few such people was, itself, a problem.

Because I hadn’t written very much of my own work yet, one thing that in my early twenties I did not understand is that writing something which confuses your audience is easy, while writing something your audience understands is difficult. Not only is Joyce, especially when it comes to Ulysses and Finnegan’s Wake, confusing, he’s intentionally so. The author infamously said, “I've put in so many enigmas and puzzles that it will keep the professors busy for centuries arguing over what I meant, and that's the only way of ensuring one's immortality.” This is more a game than good storytelling or prose style, and a game that the reader can’t win. I used to feel like I was up to the challenge, but now that challenge seems as futile as trying to bench press a metric ton, and not one writers should seek to present to readers.

I also think a sense of belonging motivated my deep dive into Joyce’s work. Temple University, where I completed my undergraduate work, had a charismatic and helpful Irish literature scholar when I was there, and a core group of us took all of his classes. We talked Joyce, Beckett, and Yates over beers in many of Philadelphia’s cheapest dive bars. Philadelphia is also home to the Rosenbach Museum, which houses a wonderful literary archive, including one of the Ulysses manuscripts. When I was a senior I was lucky enough to be an intern working on one of their programs, and allowed to use Joyce’s original hand-written pages for research. Few things make a person feel more connected to the book than holding the paper with the author’s original ideas in idiosyncratic script. With all of this, I found myself in a group of people that had a high threshold for entry: reading and enjoying the canon of James Joyce. This rarefied intellectual air, somewhere on the top floors of the ivory tower, also played into my desire to be brilliant and to achieve that quickly.

When I got to grad school the influence of Joyce started waning, but slowly. I continued reading a lot of modernism, but also got more exposed to contemporary writers like Alan Warner and Amy Hempel. Gradually, through many hundreds of wasted pages of critical and creative writing, I toned down my style until it resembled something closer to another 20s literary icon, Hemingway.

Roddy Doyle said that “Ulysses could have done with a good editor,” and while I bristled when I first read that, I now think there’s a good bit of truth to it.

So, it’s tough on this end of things to wrestle with the many years of mental effort I put in to understanding a writer who, on some level, is antithetical to the qualities I now teach and try to achieve in writing: clarity, concision, restraint. It’s even tougher when I look back and see that a lot of what motivated my efforts was misguided, pretentious, or even disingenuous.

However, like most youthful endeavors we get embarrassed about years later, this one wasn’t all bad. First of all, there’s still a lot of literary merit in Joyce. Dubliners holds up as an all-time great story collection. It’s challenging, yes, but it rewards the effort a reader puts in. I still teach “Araby” to my writing students and “The Dead” to my literature students. And Portrait is… a good novel. In looking back, it’s not as great as I once thought, especially the third chapter with its lengthy sermons, but there’s a lot of quality work in there that, again, any good reader can get at.

Even though I’d now say that Joyce’s projects in Ulysses and Finnegans Wake fail on a lot of levels, I don’t want to ignore how he succeeded. No one can deny the imaginative ways he constructed his sentences, and those are still a pleasure to read in and of themselves. Maybe it takes a linguaphile to really get into that aspect of the work, but there’s nothing wrong with a niche audience, as long as there’s some audience that really understands what the author intended. With Ulysses and Wake, on a micro level, there is. On a macro level, not so much. About 15 years ago the contemporary Irish novelist Roddy Doyle said that “Ulysses could have done with a good editor,” and while I bristled when I first read that, I now think there’s a good bit of truth to it.

Whatever may have motivated me in my Joycean endeavors two decades ago, I can say I was dedicated to what I was doing, and put in plenty of effort. That means I studied the good and the bad of Joyce’s writing, gave my intellect a workout, and that some of what I read is undoubtedly influencing my own work, somewhere, even if the influence is tough to find. The discipline I developed while studying him back then is still something I maintain in my writing and working habits, and I wonder if the difficulty of Joyce’s texts didn’t force me to develop that discipline more fully than I otherwise would have.

There are lots of things that make me feel like a preternaturally old man—like my lower back and my hairline—but few more so than a look back at what, in high school and college, I thought good writing was. Along with Joyce, I had some embarrassing obsessions with writers like Milan Kundera, but my ideas about Joyce and the extent to which they’ve developed over the years best exemplify the stark difference between the fledgling writer I was then and the more seasoned one I am now. We all change as we grow, and sometimes that process is embarrassing to reflect on. But the alternative is to not change, which would be far worse.

One of the things I find liberating about Joyce is that it's all out there. His writing is the thing. When your personal editor is way too strong, spontaneity becomes a problem. Concision, brevity, clarity, yes these are all important, but letting go is crucial--reading Joyce encourages you to write it all out, however obtuse and off-the-wall the first draft may be. Once that's done, then the built-in editor can kick in. Carver and Hemple are useful for the second draft, I believe, but Joyce is essential to tease the muse out, however malicious, unkempt, inflated and flatulent. Unlike many, many novels coming out today, the nice thing about Ulysses is that there's no editor involved. You get it all--the experimentation, the wordiness, the complexity, warts and all, and you can use it, for better or for worse.

REDACTED -- YOU WERE RIGHT, YOUR POST CHANGED EVERYTHING. GOD BLESS.