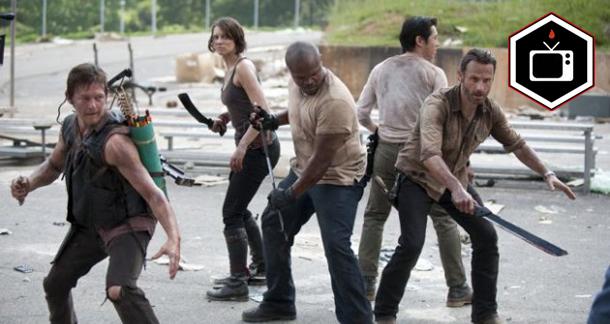 The cold open for The Walking Dead's third season makes this feel like a completely different show.

The economy of it is spectacular: the survivors converge on a house. They sweep through to secure it and forage for supplies. They find nothing, and ultimately have to retreat once they realize they've been flanked by a crowd of zombies.

It's filled with tension, and the frustration they feel is palpable. For a show that's been burdened by long, boring monologues, it was refreshing to see them play it without a line of dialogue. The cast and the directing sold it, and suddenly The Walking Dead is making good on the promise of its concept.

Seed is the best episode since the show's first... suddenly The Walking Dead is making good on the promise of its concept.

I was worried it was a fluke, that after the credits we'd go right back to the same problems that have plagued the show throughout the first two seasons--boring characters making stupid decisions, stilted dialogue, glacial pacing, and no true sense of momentum or urgency. Instead, Seed is the best episode since the show's first.

The time jump makes a huge difference. At the end of the last season, the survivors were reeling from the destruction of the farm and Lori was barely pregnant. Now she's ready to pop and everyone is acting as a cohesive unit. They've gotten past the petty infighting and they're focused on the only thing that matters: Surviving.

It's like a metaphor for the show as a whole, which has been plagued with stories of fighting behind the scenes--from uncooperative network execs at AMC to problems with showrunner Frank Darabont, who was ultimately ousted from the series. This episode felt like a reboot, leaving the problems so far in the past you can barely remember them.

Almost immediately after the credits, the survivors stumble across an abandoned prison (well, abandoned except for hundreds of zombies), and Rick recognizes it as an opportunity to hunker down in a safe spot that's protected by high fences and thick walls. The survivors begin clearing it out--first the outer field, then the inner courtyard, and finally some of the inside hallways.

The tension ramps up with each assault, until things fall apart at the end, and we leave the episode on a promising, albeit gory, note: Rick hacking off Hershel's leg to (hopefully) halt his transformation into a zombie, as a group of refugee prison inmates watch.

My one complaint about the episode, which isn't really a complaint, is that we only get a few short scenes with Michonne and Andrea. They've clearly forged a friendship, as Andrea is deathly ill and Michonne refuses to leave her, but their part of the story feels a little abrupt.

Michonne is played up as a crowd-pleaser, swooping around and decapitating zombies like a ninja, and it's nice to see a strong female presence on the show. In fact, that's one of the show's biggest improvements: the women of The Walking Dead are no longer cowering, crying stereotypes. Now we have Maggie stabbing zombies in the head and Carol goofing around with Daryl, and even Lori has a devastating monologue about fears related to her pregnancy (like if the baby dies inside her and turns into a zombie and tries to eat its way out... ew).

Speaking of Lori, she finally has a purpose: humanizing Rick, who is clearly feeling the burden of both leadership and the incoming baby. When she begs Rick to let the survivors rest before pressing on, it's not obstinate nagging, as she was prone to in the previous season--she's playing the voice of reason. Lori is probably the greatest accomplishment of the episode; she was completely reprehensible in the previous two seasons, even though she wasn't meant to be. Suddenly she's a sympathetic character.

The final few episodes of the second season showed signs of improvement, and they were clearly moving toward the prison and Woodbury and The Governor--storylines from the comic that hold a great deal of promise. Still, I was hesitant about the show's future, considering how badly the creators had dropped the ball on a number of occasions.

This episode, and the teaser for the rest of the season, pretty much erase those fears.

For the first time, since the show began, I didn't feel as much hatred for Carol. She has always rubbed me the wrong was and there was something about her in this episode that shifted. This has nothing to do with her character, but I thought she looked so much prettier with a smile on her face and her hair was beautifully messy.

Lori, though I still do not like her, did hit an emotional note for me when she was speaking with Hershel. And Hershel! I've always really liked his character and the way he spoke with her was so endearing. I wanted to give him a hug.

This may be really weird, but one of my favorite parts of the episode was at the beginning when they clear the house. When Carl grabbed the cans of dog food and opened it, you could see how desperately hungry they were. Something about that one little moment, when Beth is watching Carl open that can of dog food, had a huge impact on the way I viewed the show from that moment on.