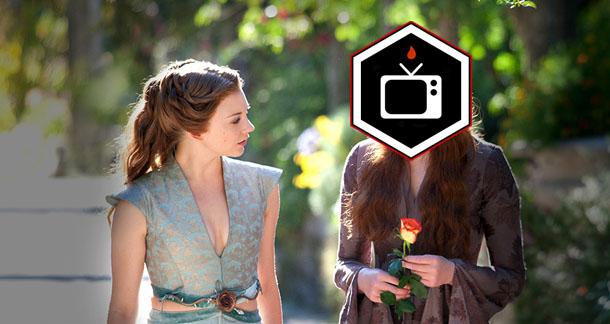 The Bear and the Maiden Fair was a very sexy episode of Game of Thrones. At least until Theon got castrated. Unless you're into that. Which, if you are, let's not be friends.

Between Robb's pillow-talk with his wife, Tormund Giantsbane's weirdly aggressive sex talk to Jon Snow, Margaery Tyrell's reassuring sex talk with Sansa Stark, and Orell's (sad) attempt to woo Ygritte, this felt very much like a Red Shoe Diaries edition of Game of Thrones. Then that shit went down with Theon and it ruined sex forever.

There are three episodes left this season... and it's starting to feel that way.

So Joffrey is afraid of somebody: Tywin. It's a pretty spectacular exchange, watching Joffrey lounging on his throne in a clear attempt to establish his authority, only to have Twyin stride right up to him and stare him down. First, because it's nice to see Joffrey cower, because he is a jerk and a terrible person. But also because it's another opportunity for Charles Dance to be great. I think he may be my favorite actor on this show; he's not a main character and doesn't get a ton of attention but every scene he's in is fantastic.

And it's another reminder of just how limited Joffrey's power truly is; it only goes as far as the people willing to enable him.

Meanwhile, things are not looking so great for Tyrion and Sansa. Tyrion is stuck between a rock and a hard place (i.e., a highborn girl and a prostitute). Thankfully Bronn shows up to offer some much-needed perspective.

Sansa is pretty bummed at the thought of marrying Tyrion, though Margaery is there to offer some much-needed perspective, too: Tyrion hasn't mistreated her, he's a nice-looking guy, and their children will be powerful. Granted, Margaery is more interested in power, whereas Sansa wants a fairy tale, so it's not the same thing, but it's better than nothing, and also better than Joffrey. Anything is better than Joffrey.

The most interesting scene happens outside King's Landing, on the ship carrying Melisandre and Gendry through the graveyard of ships left over from last season's Battle of the Blackwater. Melisandre reveals to Gendry he's Robert Baratheon's bastard son. Which is a pretty big game-changer, since Gendry largely disappears from the books and, as I recall, doesn't discover his lineage.

So it raises the question of whether Gendry will make some kind of run for the crown, which is his right, I guess? The Lannisters don't seem to care much for who should rightfully wear the crown, though they did make it a point to slaughter all of Robert's bastards. Though, really, with the way Melisandre keeps making sly comments about the power of his blood, he may very well end up as fuel for one of her crazy-ass magic tricks. Still, an interesting development!

The odd courtship between Brienne and Jaime was my favorite part of the episode. When Brienne called him "Ser Jaime" for the first time, instead of the pejorative "Kingslayer", I don't know what was better: Brienne's newfound respect, or Jaime's subtle "holy shit I want to cry" reaction.

And then they fight a bear!

Well, no, first Jaime realizes that Locke is going to do something nefarious to Brienne and he goes back to Harrenhal to get her. And he finds the assembled jerks at the castle are performing a real-life re-enactment of The Bear and the Maiden Fair.

Jaime, a character who has been fairly selfish and self-serving, and is also missing a hand, jumps into the bear pit. Which is insane. It's a real, genuine moment of growth for the character, on a show that doesn't often show a lot of growth in the characters. (Besides Daenerys becoming a badass and a few of the kids showing leadership potential [Robb, Jon] how many have these characters have really changed?)

Power suits Daenerys. I don't think Emilia Clarke has radiated as much strength and confidence than when she stared down the messenger from Yunkai and told him what was up. Which is: Surrender, and free your slaves. She also had a pretty big choice to make, turning down the offer of a fleet of ships to take her to Westeros, instead opting to stay in Slavery's Bay and break some more shackles. It wasn't played as a huge, world-changing decision, but it does feel like a natural extension of the path she's on. And this makes me believe the end of the season will build toward the battle for Yunkai, which seems like a good note to end the season on for Daenerys and her merry band of creepy old men.

Robb Stark's wife is pregnant! Good on them. Not much to see here, besides Talisa Maegyr's ass.

Wait, seriously though, I'm not going to say what is or isn't going to happen with these characters, but on a show like this, doesn't a character announcing a pregnancy portend just a bit of dread? I'm curious to know if the non-book-readers felt like that...

Also, is Arya in Riverrun now? Does that count as Riverrun? Who knows, with these people moving around so much. Still, even though I'm sure she's upset about being captured by The Hound, it will be fun to listen to them mouthing off at each other.

Oh Theon. Poor, poor Theon. Yes, he's an asshole, but I think we're getting past the point of fair. This was one of two scenes that I disliked in this episode. Theon actually disappears for the whole of the third book and when we meet him again, he's broken and battered from months (years?) of torture. So, essentially, we miss all the grisly bits. Which the showrunners now seem intent on showing us.

And I'm an adult. I can deal with a little blood. But you know when torture gets pornographic? When it gets into castration. I mean, c'mon! Puke.

The other scene I disliked was Osha's monologue about her boyfriend. The scenes with Bran and his merry band of weirdos are getting tiresome. No one wants to forget they're there, but this story is just spinning wheels every single time it appears on screen. Think about it: Even though they're trying to make it to The Wall, they could have done every single one of their scenes from the same exact spot, and it's wouldn't have made a difference, because there's no forward movement.

Which, in fairness, it spends a great deal of time spinning wheels in the book, but in a visual medium, the tedium really shines.

Finally, there's Jon and the Wildings. I wrote this whole recap and forgot to mention them. Oh well. They're still trying to get to Castle Black, and there's more development in the Jon/Ygritte relationship, and Jon seemed to show a greater range of emotion besides "darkly brooding," which was nice. While I was far less disappointed with their scenes, I do wish these characters would do something besides walk and sneer at each other. Jon's crew has the forward movement that Bran's crew lacks, but I hope they get to Castle Black soon...

Discuss! What did you like? Not like? Were you moved by Jaime and Brienne? Bored by Bran?

I'm wondering whether or not Talisa's pregnancy in the show might relate in any way to Jeyne Westerling in the book...

This episode was pretty okay, it basically filled in everyone's rationalities, enhancing the characters sometimes and then sometimes kind of dumbing it down. I loved Gareth from The Office in this episode. Those scenes were astounding.

They're basically fleshing out Osha now so they can finally get rid of her, yeah? How long ago in the novels storyline did she exit?

I guess the whole thing with Gendry is because they got rid of the other Baratheon bastard character at Dragonstone that Melisandre is always itching to sacrifice, if I recall? I was thinking that the next novel would have Gendry actually doing a lot of stuff, considering the way they leave the cliffhanger in Feast for Crows. Whatever the hell they're doing in the show here, it's at the least interesting.

I'm not really into them humanizing Shae at this point in the storyline, effectively demonsterizing her later. This characterization they're going with is a lot easier to get a read on as far as what happens later, but it's less satisfying to me and I think takes away from Tyrion. Now it's not just revenge, he's gonna be kind of a dick at the end of that plot point.

Joshua Chaplinsky from New York is reading a lot more during the quarantine May 14, 2013 - 8:32am

I appreciate that they split Swords into 2 seasons, giving the story room to breathe, but there has been a fair amount of wheel-spinning as well. Still, there has been some great character moments and as a whole it feels less rushed than season 2.

Impotent Verse from Ely, Cambridgeshire, UK is reading Off Armageddon Reef by David Weber May 15, 2013 - 10:29am

Apparently, this episode was written by G. R. R. Margin himself, and, so far, this is my least favourite.

Theon's torture scene was well done, and is important to his character and the story, I assume. Many people seem to have been very squeamish about it but you never actually see anything, the camera cuts away as the menacing men reach for him (at least, in the UK broadcast).

I keep waiting for Sansa to grow some balls, but apparently all the balls went to Arya, still my favourite character. I feel tha the Hound is shortly going to be having a bad time (I've not read the books, so I don't know, I just hope).

Well ya gotta "hand" it to the special effects folks on this one, Jamie's stump sure looked damned real. That was THE scene for me. His new pal the doc gives him the low down so he rebels not with his sword this time but his wits and by the sheer power of his will leads them back to raise hell with Locke and those fiends who threw Brienne into the bear pit. Locke is proving himself quite as remorseless as Jaimie was when he shoved Bran from the high window. How long will Jaimie abide his insults?