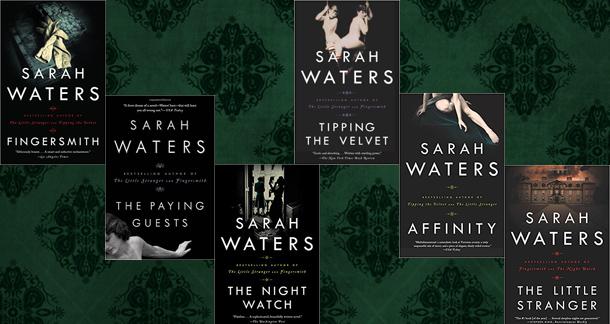 I recently read all six of Sarah Waters’s novels back to back. They’re all stand-alone.

For those unfamiliar with Sarah Waters, the pet phrase I see thrown around is “lesbian Victoriana.” Which, admittedly, is a good phrase. But Waters does more historical periods than just Victorian, and not every one of her books is LGBQT+, and – most importantly to me – it doesn’t touch on the fact that most of her novels are at least a little bit gothic – some skewed more toward romance and others toward horror.

But besides those common features and a consistently exceptional quality of prose, her style varies quite a bit. Some books are almost mundane while others are flashy or rely on twist after twist. Some cover tight storylines while others sprawl over time and among characters. Some are tragic and some are sweet. And of course each has its own unique flavor that any reader will lean towards or away from, depending on taste. So I thought I’d give a quick recommendation rundown of all six for anyone who might be interested in trying out a Sarah Waters novel. I’ll keep them as spoiler-free as possible while still steering readers in the right direction.

Okay, so I already said a lot about Fingersmith above. That title, eh? Turns out “fingersmith” is slang for “thief” and not just the world’s boldest joke about lady love, which makes it doubly effective, as this book is about both. (You might have heard of this novel because of the movie adaptation recently released called The Handmaiden.) Deliciously gothic in the traditional sense of the word, this book is the twistiest of all of Waters’s. It’s rich but still (I thought) fast-paced overall, and I really cared about the characters. I still remember Sue and Maud vividly. I’d say this one errs on the romance side of gothic’s signature horror/romance duo, although it’s probably equally a drama – and strangely funny, to boot. And writers, this one is a masterclass on setting. I’ve never seen Victorian London come so vividly to life.

If, like me, you’re all about the gothic, The Little Stranger is next in line. If you like your gothic more horror and less romance, this one’s the one for you. This book is seriously unsettling. No, it’s not straight horror and it’s definitely not a thriller; it’s a creeper. It has a quiet, insidious, slow-building type of dread fueled almost entirely by the intelligence and insight of the reader. I can’t even imagine the restraint it must’ve taken to trust that this book would come across how it does – an unnerving feminist commentary on post WWII England. This one has no overt LGBTQ+ storylines and is the only one of Waters’s novels narrated entirely by a man.

With Tipping the Velvet we drop the gothic and mystery elements and amp up the queer elements. I thought I wouldn’t like this one as much without the gothic touches I so love, but it was riveting and so, so well done. Plot-driven readers, be forewarned: this one is character first and foremost; plot seems almost incidental. While seeming to start out as a straightforward romance, this one actually ventures into drama: a single character’s life spanned over years. It eschews genre to the point of potentially frustrating commercial readers, but I was onboard the whole time. I think my favorite part of this book is how fearlessly it portrays marginalized cultures: lesbian, genderqueer, sex workers, and generally women who refuse to play their assigned roles in Victorian London. It wasn’t the most satisfying of Waters’s books, but I found it well worth my time.

Oh, The Paying Guests. If it had stuck its landing, this one might’ve been my very favorite. I found the ending infinitely unsatisfying – Waters uncharacteristically goes off-course and mires in the mud before finally coming to an ultimately trite ending – but the rest of it was SO GOOD. SO SO GOOD. I absolutely gobbled it up, and that with zero gothic elements and zero mystery and, truly, very light plot. The two main characters in this star-crossed romance are drawn exquisitely. Frances and Lilian seemed real to me, as did 1920’s London. This one filled and broke my heart so powerfully that I’m tempted to recommend it even knowing that the ending fizzles.

With Affinity Waters returns to gothic creepiness and several other recurring elements of her work: lesbian romance, asylums and other forced institutions, Victorian London, mystery, feminism and oppression, plot twists, and the edge of the supernatural. I’m not sure why this one was one of my least favorites. On paper it seems perfect for me, but in reality it just didn’t sparkle the way some of the others did. This one was so dark that it became almost unenjoyable at times, but as always it was expertly rendered. Those who require a HEA should skip this one, but those who embrace the darkest depths might just love it.

Last and (for me) least, I read The Night Watch. Well, I listened to it, and I think that was my first mistake. This is not a book to listen to on audio; this is a book to read on the page – preferably the printed one and not a screen. To start with, it follows four different characters in roughly equal measure, so it took me a long time just to remember who was who. And when I finally got them all pinned down, we went back in time (all in the 1940s). Perhaps I was also expecting bigger twists than I was given. So if you’re interested in reading The Night Watch, I’d go into it with expectations of a vivid, voyeuristic, and painstaking character study of four people and how their lives intersect and tangle. It certainly displays Waters’s talent for drawing small details into reality, but I’m glad it wasn’t the first of hers I picked up. That said, I’m also glad I read it.

To sum up: Sarah Waters is freaking brilliant and everyone should read at least one of her novels. If you’re into gothic romance, go with Fingersmith. Gothic horror, go with The Little Stranger. Not into gothic, go with Tipping the Velvet. And if you read one or more of those three and decide you’re a fan like me, then I’d suggest continuing on to explore The Paying Guests, Affinity, and The Night Watch to hold you over for Sarah Waters's next masterpiece.