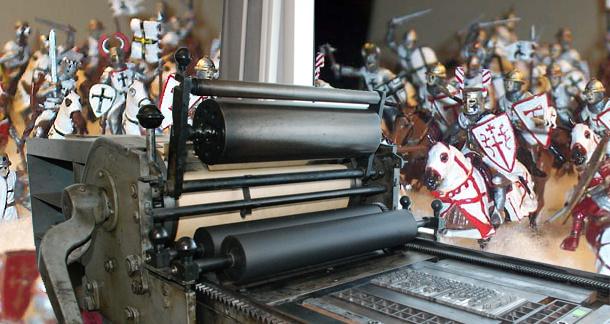 I’ve been reluctant to dig too deep into the publishing wars that have been heating the upholstery of board room chairs for the past several years. Art is art and business is business, and for centuries the two have never mixed terribly well. But, we’ve now entered into a dark time of war, hyperbole, and hysteria; and common sense is being lost to rank silliness.

Writers passionately believe their talent and vision should trump the trivial requirement of business to make money, and conversely, business has always held that writers are suppliers and should be handed respect solely on the basis of market performance. In truth, neither view is wholly right or wrong, and the balance between the two has in general benefited both the art and the business that has grown from it.

Writers passionately believe their talent and vision should trump the trivial requirement of business to make money... business has always held that writers are suppliers and should be handed respect solely on the basis of market performance.

The digital world in all of its brilliance has thrown the old way into chaos, left good people gasping for air, and put hundreds out of work. As has been the history of technology for millennia, new ways of doing things destroy businesses and creates businesses. Traditional publishers have been caught in the wake of digital technology. They are struggling to survive. They do not dismiss writers or consider them a contemptuous burden. They understand their value and continue to demonstrate it every day, but they live in a world of economic realities.

And, let’s not fool ourselves. The simplicity of self-publishing today has opened the doors to more than great writers just looking for a break. Fueled not by altruistic visions of art, but their own desperate desire to create fame, fortune, and/or just feed their own ego; millions of wannabe writers have slapped the keys to make pages that ought not be read by anyone. Every successful agent or editor reads hundreds of manuscripts to find one that holds promise, and more often than not, that one rarely makes it to the editorial board. The process is not about keeping anyone down. It’s about identifying good writing that people want to read.

Digital technology has opened the door to everyone, and it has given a few the break they deserved. It truly is a wonderful thing, but it is not the gateway to Utopia. Many involved in publishing today and tomorrow are as everyone has always been – driven by the desire to succeed financially. Amazon wants to make money. Penguin, Simon & Schuster and the other publishing giants want to make money. Even non-profit groups that rally to provide low-cost services to writers have a financial motive, and it strikes me in these crazy times that the ones screaming the loudest seem the most driven to protect their income.

The point is that the old way of publishing is changing. As it has always been, new, agile businesses will grow and old, unbending businesses will disappear. More people are attempting to produce books than ever before, and fewer with any real professional training. Forbes Magazine has reported that authors have found greatly improved publishing success when they engage a professional to guide them through the process. That has opened the door to a wide variety of publishing service providers, with widely varying abilities and motives.

Though many charlatans have made a living following this foul practice, it has never been ethical for agents, publishers or any other industry professional to provide services to aspiring authors on the promise, hint, or even illusion that a publishing deal waits at the other end of the process. No one should ever engage the publishing services of anyone they think is going to help them get a publishing deal.

That understood, there is a growing number of good people out there, many who have lost their jobs at one of the old houses, who are helping non-professionals realize their publishing dreams, and there is nothing wrong with that. As in any time of dramatic change - buyer beware. Do your homework and research the profit motives of everyone involved. Most self-publishing companies are less interested in quality and benefit by the service packages they sell. They make money on quantity. Traditional publishers are more about quality but are probably too focused on the sure thing. It’s a sticky problem, but one thing is sure – writers more than ever before need to examine the process of publishing from all sides if they are to succeed.

Erin, I'm a long time lurker of the site and decided to overcome my noncommittal nature to let you know that I enjoyed the article.

This is timely for me as I am in the process of seeking representation for my first novel. I've gotten it into my mind that self-publication will be my fallback plan, but as the landscape of publishing continues to evolve, I can't help but wonder if I should be considering self-pub a competitor to the traditional route, rather than a contingency. I'm going to have to check out that Mark Levine book you referenced.

Matt, I'm glad you decided to come out of the shadows and honored you chose to comment here.

I love traditional publishing and I love the opportunity writers have to take their fate into their own hands (sometimes with greater control and better results...sometimes). Self-publishing is now seen as a compliment to the traditional publishing process...another way for a writer to build their platform/portfolio, if you will. If your book sells well, if it's well-reviewed,etc., an agent or publisher may want to bring you into their fold. Or not. So, you could treat the self-pub experience as an experimental one to see where the process takes you (expect equally random results) or you can consider yourself a publisher and develop a marketing plan in support of your publishing and promotional efforts (word of mouth is still the best way to sell books, so get people into your book and allow yourself a lot of time to develop relationships).

Working with strong performing indie publishers is also a good option for you. Truthfully, I'm hoping to see substantial growth here in the next few years. If I was still agenting, they'd be on my first round of submissions, not my third.

Whatever path you choose, research, research, research. Bree Ogden is our resident literary agent who has a very insightful column here a few times a month (Ask The Agent)...feel free to send her your questions as you progress in your process.

Erin, thanks for the quick and thoughtful response. I knew that getting active on here would benefit me, and you've already proven me right. I'm going add indie house research to my homework.

I have read Bree's columns and always find them informative. I may just have to send her a question or two.

Thanks again. I look forward to your next column.