Post-Mortem: 'The Hitchhiker's Guide To The Galaxy' by Douglas Adams 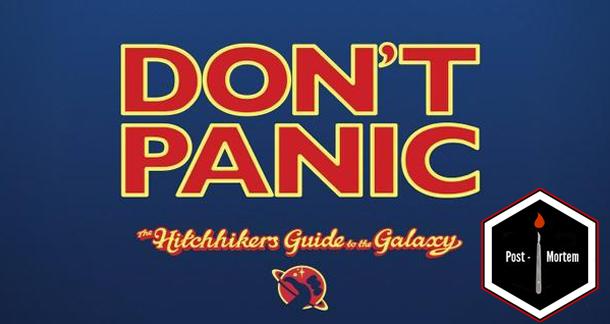 The Hitchhiker's Guide to the Galaxy has pervaded pop and geek cultures since its publication in 1979. Actually, since before that. The novel - the first in a "trilogy" that actually includes six books - began its life as a BBC radio series in 1978. The story has also been recorded as an album, a mini-series, a video game, and a feature film. As entertaining (and often contradictory) as each of these iterations have proven to be, the original novel of the series is the most lasting and resonant component of this sprawling epic.

Adams has one hell of a way with words. The man's language is sharp and original, often piercing and always hilarious. There's a reason I included him in my Top 10 Authors Who Write Great Dialogue list. Each character has a voice so distinct, so overwhelmingly theirs, as to make any "so-and-so said's" utterly superfluous. The book is a master class in how to write dialogue: it's infinitely sayable, clever but not impossibly so, comfortably recognizable but entirely unique.

'Yes,' said Ford, 'except...no! Wait a minute!' He suddenly lunged across the chamber at something behind Arthur's line of vision. 'What's this switch?' he cried.

'What? Where?' cried Arthur, twisting around.

He slumped against the wall again and carried on the tune from where he left off.

'You know,' said Arthur, 'it's at times like this, when I'm trapped in a Vogon airlock with a man from Betelgeuse, and about to die of asphyxiation in deep space, that I really wish I'd listened to what my mother told me when I was young.'

And because I couldn't possibly pick only one example of Adams' bright, brilliant dialogue...

'Did you think of that, Earthman?' he demanded.

'That's very good thinking, you know. Turn on the Improbability Drive for a second without first activating the proofing screens. Hey, kid, you just saved our lives, you know that?'

'Was it?' said Zaphod. 'Oh well, forget it then. Okay computer, take us in to land.'

'No, don't move,' he added as Arthur began to uncurl himself, 'you'd better be prepared for the jump into hyperspace. It's unpleasantly like being drunk.'

'What's so unpleasant about being drunk?'

'You ask a glass of water.'

Adams created an entire universe with The Hitchhiker's Guide. Actually, he just populated our own universe - with aliens both humanoid and wildly otherwise, robots and monsters, talking planets and chipper doors and matronly space ships. But first he establishes a steadfast foundation out of four indelible main characters. Arthur Dent, our hapless protagonist, is generally querulous and in perpetual search of tea, occasionally brave when his cohorts and readers least expect it. Ford Prefect, his Betelgeusian best friend, is a wry, free-wheeling researcher for The Hitchhiker's Guide, a student of stories and universekind. Zaphod Beeblebrox (who has "turned unfathomability into an art form") is the attention-starved President of the Imperial Galactic Government, a sometimes clever and often outrageously stupid semi-half-cousin of Ford's with three arms, two heads, and a dangerously impetuous nature. And Trillian, or Tricia McMillan, the eternally imperturbable astrophysicist whom Zaphod spirited away from Earth - and from Arthur - at a party six months before the start of the book.

Each of these characters, along with so many more secondary and tertiary characters, is made tangible through the nuance and texture Adams invested in them. They have histories and quirks, clear motivations and understandable challenges. Their relationships with each other and to the reader are all decisive. That's how you make a character stick - these guys have lived so clearly in my memory since the first time I read The Hitchhiker's Guide, from their appearances to their idiosyncrasies to their language. They are enduring.

And Adams manages to make bizarre science fiction fixtures every bit as memorable. Marvin the Paranoid Android - a long-suffering, joy-sucking little rolling bummer of a robot - is probably the most notorious, but the dark green, rubbery Vogons whose passions are poetry (the third worst in the Universe) and destruction are hard to forget.

He was the way he was because billions of years ago when the Vogons had first crawled out of the sluggish primeval seas of Vogsphere, and had lain panting and heaving on the planet's virgin shores...when the first rays of the bright young Vogsol sun had shone across them that morning, it was as if the forces of evolution had simply given up on them there and then, had turned aside in disgust and written them off as an ugly and unfortunate mistake. They never evolved again: they should never have survived.

The fact that they did is some kind of tribute to the thick-willed slug-brained stubbornness of these creatures. Evolution? they said to themselves, Who needs it?, and what nature refused to do for them they simply did without until such time as they were able to rectify the gross anatomical inconveniences with surgery.

With equally vibrant language, he describes the feeble and affronted Magrathean creator of planets, Slartibartfast (named such because Adams wanted something that sounded "very rude"), the reptiloid atomineers, the sylphlike maximegalaticians, the octopodic physucturalists and my personal favorite, the Hooloovoo (a "superintelligent shade of the color blue").

Putting the Science in Fiction and the Fiction in Science

The technology imagined by Adams is marvelous, clever and weird and utterly unlike that in any other sci-fi. He speaks of a small fish that one places into one's ear in order to translate every language in the known universe. The Babel fish "feeds on brainwave energy received not from its own carrier but from those around it. It absorbs all mental frequencies from this brainwave energy to nourish itself with. It then excretes into the mind of its carrier a telepathic matrix formed by combining the conscious thought with nerve signals picked up from the speech centers of the brain which has supplied them."

The main characters travel on a ship that is powered through a faster-than-light Infinite Improbability Drive. The drive is based on quantum theory: a subatomic particle is probably in one place, but there's also a small probability of its being somewhere far away from that place. Therefore, if the spaceship can control probability, its inhabitants pass "through every conceivable point in every conceivable universe almost simultaneously" as they travel. Makes sense, right?

The Vogon Poetry Appreciation Chairs use "imagery intensifiers, rhythmic modulators, alliterative residulators, and simile dumpers - all designed to heighten the experience of the poem and make sure that not a single nuance of the poet's thought was lost." Considering the fact that Vogon poetry is so very terrible, one can imagine what a dismal experience that creates.

And of course there's the Deep Thought computer, built by hyper-intelligent pan-dimensional beings specifically for the purpose of answering The Ultimate Question of Life, The Universe and Everything. Deep Thought, after a period of seven and a half million years, produced the answer. That answer: 42. The super-computer disguised as planet Earth was commissioned by a group of mice (who are really quite brilliant, you know) in order to discover what the actual question is for that answer, but unfortunately, after a few billion years, Earth was destroyed in order to make way for a hyperspatial express route. You win some, you lose some.

Of all of the things that make The Hitchhiker's Guide to the Galaxy vital reading, the advice within is the most indispensable. Adams isn't only witty, talented and sly, he's also wise. The wisdom contained in the novel is mostly due to the book within the book, the actual Hitchhiker's Guide for which Ford is a researcher, a travel guide for affordably traversing the known universe. The history of which “is one of idealism, struggle, despair, passion, success, failure, and enormously long lunch breaks.”

Some guidance provided inside these wonderful pages:

Never forget your towel. You can sleep on it, warm yourself with it, carry something in it, protect your head with it, engage in hand-to-hand combat with it, wave it as a distress signal, sail on it, "and of course dry yourself off with it if it still seems to be clean enough."

The knack to learning to fly is to "throw yourself at the ground and miss. Pick a nice day...and try it."

"Time is an illusion. Lunchtime doubly so."

Those who created robots are a "bunch of mindless jerks who'll be the first against the wall when the revolution comes."

The history of every civilization in the universe generally goes through three phases of intellectual evolution: Survival (How?), Inquiry (Why?) and Sophistication (Where?). "For instance, the first phase is characterized by the question How can we eat?, the second by the question Why do we eat? and the third by the question Where shall we have lunch?"

The Hitchhiker's Guide to the Galaxy endures and continues to mean a tremendous amount to nerds everywhere. Douglas Adams created something significant with this wonderful, silly book, and that something occasions a revisit if you haven't read it in some time, and demands a read if you never have.

Reading this made my morning.  Such fun to relive that book.

In highschool, we got to pick our own books to read for an English class out of a pile of books.  I didn't know HHGtTG.  I just picked it up based on the name.  I have been much less panicked ever since.

And I quote "Time is an illusion.  Lunchtime doubly so."  every time someone talks about not having enough time to do something.

Miranda Moth from Guelph, Ontario, Canada is reading The Maze Runner by James Dashner July 6, 2012 - 10:35am

Are you in my computer? I googled the Ultimate Question yesterday to prove a friend wrong, it isn't 6 times 7, it's 6 times 9 with a broken computer! Definitely some of my favourite books, and I make all my non-reading friends read them in order to try and convert them. This is why I have bought the trilogy in five parts nearly five times; I should learn that non-readers don't read and therefore never return borrowed literature...

Joshua Chaplinsky from New York is reading a lot more during the quarantine July 6, 2012 - 10:40am

I read these books in like 7th grade. I think it's high time I revisit.

Awesome article! Read HHGTTG in high school and really enjoyed it. Reading this article brought back memories of how much I enjoyed the book. I feel like buying my own copy and reading it again. A definite must have for my book-shelf.

If you haven't listened to the original BBC radio series, it's an absolute delight. (Avoid the newer ones they did 5 or 6 years ago, though. They are sadly disappointing in comparison)