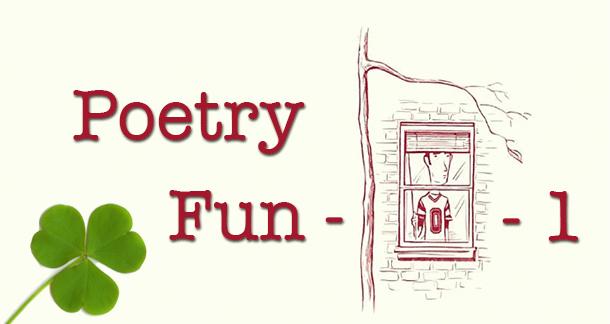 Well, this column hasn't been canceled yet, so apparently there are enough of you out there who truly are interested in poetry. I'll raise a toast to that! Be right back...

::actually going to get a drink to help me write this column::

...okay, hey. Full disclosure, I only had scotch, so I went out to the store to get something Irish. I'm a Guinness man normally, and there's a nice Irish Beer Discovery Pack with Guinness, Black Lager, Smithicks, and Harp, so that's what I got. Sláinte!

Now let's get down to it. For me, March is all about St. Patrick's Day. Other things happen, sure—it's a long month, after all—but none of that really matters to me. I'm Irish, and this is my time to appreciate my great cultural heritage. Also, as I mentioned, I enjoy drinking Guinness. Even more than Guinness, though—gasp!—I love Irish poetry.

Ireland is a nation overflowing with poetic talent, so this St. Patrick's Day, when you've raised your glass so many times that you don't have any friends left to toast, lift one for the Irish poets.

Ireland is a fantastic place. Its beautiful rolling hills and rocky coastal cliffs are breathtaking, a natural art worthy of our best words. Irish poetry is more than just a series of love songs to the physical beauty of the Emerald Isle, though. Ireland's unique history of internal and external struggle has bred some of the world's foremost literary talents. Oscar Wilde, George Bernard Shaw, James Joyce: these Irish sons and many more have done their native home proud by speaking out for her and building up a rich literary tradition to rival many of the larger and more populous nations of the world. It's incredible, actually, how poetically important the island is considering its size (only a bit bigger than the state of West Virginia). However, when one looks at its rich history, against the backdrop of the rise and dominance of its longtime oppressor, Great Britain, it's almost surprising that Irish poetry isn't more popular among readers today.

The poetic tradition in Ireland dates back well over a thousand years in Irish, and at least more than half a millennium in English as well. Much of the early Irish-language poems were about nature or religion, but many told the tales of epic battles between the great clans of Ireland, or the adventures and myths of the earliest Irish peoples. When the English (re)conquered the island in the 16th century, instead of snuffing out the great Irish poetic tradition, they incorporated it into their own literature. Much of The Faerie Queene, that great epic poem by the Englishman Edmund Spenser, takes place in a mythical land that bears no small resemblance to Munster in the south of Ireland. Spenser—one of my favorite sonneteers—spent a lot of time in Ireland, and though his patriotic views could not have been said to align with the natives, he nevertheless was inspired by his time there.

That's English poetry about Ireland, though, not Irish poetry. Ireland is certainly known for its beautiful landscapes, but its poets are known for their formidable command of an essentially adopted language. Famed Irish writer Jonathan Swift, for example, known today for the biting satire of Gulliver's Travels and A Modest Proposal, was also a fairly accomplished poet. "A Beautiful Young Nymph Going to Bed," one of his funnier poems, mocks the degree to which women wear make up, while his odes tackled subjects as varied as cannons, snow, corkscrews, and even gallows:

There is a gate, we know full well,
That stands 'twixt Heaven, and Earth, and Hell,
Where many for a passage venture,
Yet very few are fond to enter...

Though not as witty as Swift, Oliver Goldsmith achieved some level of fame for his poem "The Deserted Village," a social commentary on the depopulation of rural Ireland. Social commentary is a major throughline for many Irish poets, actually. Oscar Wilde, the celebrated author of The Picture of Dorian Gray and The Importance of Being Earnest, was famously imprisoned for homosexual activities in 1895. After his release, he wrote "The Ballad of Reading Gaol," which documented his experiences in prison and commented on the hard time served by all prisoners.

Several leaders of the Easter Rising of 1916 were also poets, Patrick Pearse and Thomas MacDonagh probably being the most famous among them. Pearse, MacDonagh, and a dozen others—including another poet, Joseph Mary Plunkett—were executed by firing squad for their roles in the rebellion. A year later, Irish poet Francis Ledwidge was killed at the Third Battle of Ypres. Despite Ireland's shaky relationship with Great Britain at the time, Ledwidge chose to fight because, as he put it, he "would not have [Britain] say that she defended us while we did nothing at home but pass resolutions." Ledwidge was but one of many poets who died during World War I, all of whom live on through their work. Pearse and MacDonagh were immortalized via both their political and literary lives, but also in the poems of American Ezra Pound ("Canto XIV") and fellow Irishman W.B. Yeats ("Easter 1916").

Probably not the foremost Irish man of letters but almost undoubtedly the foremost Irish poet, William Butler Yeats had an incredible ability to distil complex ideas and situations into easily read symbols, images, and allegories. Take for example his poem "A Drinking Song," a simple six-lined stanza that distils the two most powerful forces in life—death and love—into a single moment:

Winner of the Nobel Prize in Literature in 1923, the first Irishman to win the award, Yeats was one of—if not the—preeminent poets of the late 19th and early 20th centuries. His work has influenced millions, including other major artists of the 20th century. Chinua Achebe got the name for his critically acclaimed novel, Things Fall Apart, from Yeats' poem "The Second Coming." Joan Didion also took the title for her famous book of essays, Slouching Towards Bethlehem, from that poem. The title of Cormac McCarthy's No Country For Old Men came from Yeats' poem "Sailing to Byzantium."

The bulk of Ireland's poetic hopes and dreams do not hinge on one man, however. Daniel Day-Lewis's father Cecil was a famous Irish poet. Seamus Heaney, who died only last year, was one of Ireland's strongest voices in the last century and one of the most well-known poets in the world. One of his most frequently quoted lines comes from his poem "Digging":

Between my finger and my thumb
The squat pen rests; snug as a gun.

Prior to his death, Heaney's poetry made up "two-thirds of the sales of living poets in Britain," which is nothing to sneeze at considering he wasn't even born in Britain. Eavan Boland and Paul Muldoon, two other prominent Irish poets, are perhaps not quite as popular as Yeats or Heaney but are certainly as influential to their fans and admirers. (Boland's poem "Quarantine" is one of my favorites.)

Obviously there are others. Samuel Beckett wrote poems; Brendan Behan wrote poems; George Bernard Shaw wrote poems* (*not very good ones). Hell, even James Joyce wrote poems, though that should come as no surprise to anyone who's read his incredibly poetic prose. And I'm not even including the poetic quality evident in Ireland's great songwriting history. (Who doesn't love "Come Out Ye Black and Tans"? Except, you know, the British...) We've also only covered the folks writing in English; we haven't discussed at all those poets who wrote predominantly in Gaelic, like 17th-century poets Pádraigín Haicéad and Dáibhí Ó Bruadair, or 20th-century poets Máirtín Ó Direáin, Seán Ó Ríordáin, and Máire Mhac an tSaoi.

Ireland is a nation overflowing with poetic talent, so this St. Patrick's Day, when you've raised your glass so many times that you don't have any friends left to toast, lift one for the Irish poets. They've had a pretty rough go of it, after all. More importantly, though, they're built up a vivid collection of work exploring the beauty of nature, the difficulties of everyday life, and what it's like to be on the wrong side of imperialism. They have so much to say, and they say it so damn wonderfully.

In case I haven't convinced you yet to pick up some Irish poetry, I'll leave you with one last bit of Yeats, from "Aedh Wishes for the Cloths of Heaven":

Had I the heavens' embroidered cloths,
Enwrought with golden and silver light,
The blue and the dim and the dark cloths
Of night and light and the half light,
I would spread the cloths under your feet:
But I, being poor, have only my dreams;
I have spread my dreams under your feet;
Tread softly because you tread on my dreams.